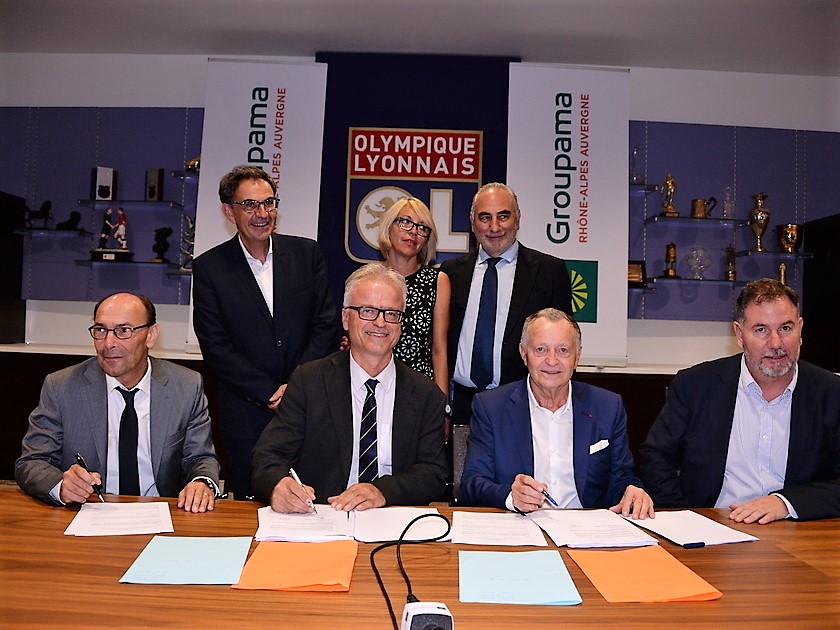 French Ligue 1 side, Olympique Lyonnais (OL), have confirmed this week that the discussions they had initiated exclusively with Groupama Rhône-Alpes Auvergne back on June 29, have culminated in the signing of a global, modern and innovative industrial partnership.

Groupama Rhône-Alpes Auvergne (Groupama) have been a major partner of OL for several years now, having previously secured the naming-rights to the club’s training centre located in Décines-Charpieu, east of Lyon, which is also where the stadium is located, for €1.3m over three years, and to the Academy Training Centre in Meyzieu, as well as being the Shirt Sponsor of both the men’s and women’s teams.

In this latest extension, the new centrepiece of the renewable 3-year agreement becomes the stadium naming-rights, which sees the 59,186-seat Parc OL re-named ‘Groupama Stadium‘. The partnership also extends to the establishment of a common commercial structure.

Concerning the latest naming-rights agreement, Groupama will receive visiblity both inside and outside the stadium, as well as on the itineraries/programs of VIP customers and the general public, plus within the sports zones, and will also enable Groupama to use the image of the stadium to promote its offers and services.

Groupama Rhône-Alpes Auvergne will of course also benefit from large-scale exposure at all events organised at the Groupama Stadium, with the use of spaces 365 days a year, a unique value proposition unique to the stadium.

The contract also foresees the development of important commercial synergies between Olympique Lyonnais and Groupama Rhône-Alpes Auvergne aimed at delivering high economic ambitions in both the short and long term.

I am particularly pleased and proud of the signing of this global industrial agreement of naming and partnership with Groupama Rhône-Alpes Auvergne. We have always been convinced that what was possible abroad would also be possible in France. We were able to imagine together a device that transcends the mere visibility of a brand on an enclosure.

We are proud that the mutual company Groupama Rhône-Alpes Auvergne is once again joining its partner OL to give its name to this great stadium whose early successes are very promising. We hope to have a very good visibility and an influence on our region, to bring our image to all our publics, and especially to elected representatives and members.

This new step in our partnership with OL is reflected in an innovative industrial project in its construction, ambitious in its economic objectives, and valuing for the pride of belonging of our employees and our members. Groupama Stadium will be a great stadium, but also a place of events and socio-cultural gathering unique for our region. We extend our best wishes for success to its development.

Read the club’s official press release (in French) regarding the stadium naming-rights deal online at: http://www.parc-ol.com/groupama-stadium/

An annual figure of between €5m to €7m had reportedly been sought by the club, however, as of yet, no financial details have been released by either OL or Groupama.

This is an interesting development in terms of stadium naming-rights, which have generally been the exclusive reserve of new or newly-redeveloped venues, as OL’s home ground has been up and running for 18 months now, having officially opened back in January 2016 in preparation for its hosting duties during UEFA EURO 2016, giving hope to other venues looking to secure naming-rights for existing venues.

The future certainly looks bright for Groupama Stadium, having already hosted Coldplay and Celine Dion concerts this month, the venue will host the 2018 UEFA Europa League Final on May 16, 2018, and is one of 12 stadia hosting matches at the 2019 FIFA Women’s World Cup, having been scheduled to host both the opening match and the final.