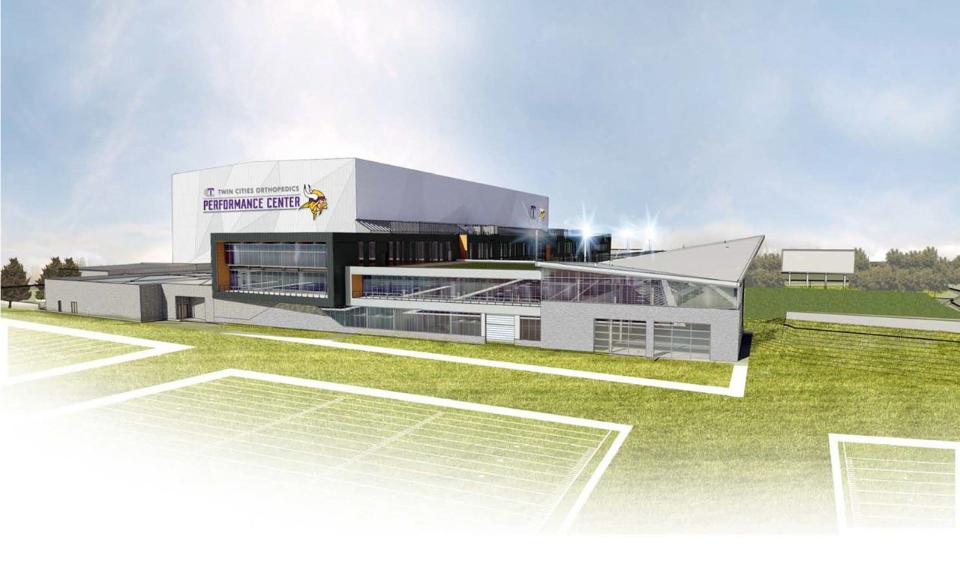 Architects of the future home of the Minnesota Vikings, Crawford Architects, have drawn from the past, paying homage to the heritage of the team’s namesake, while continuously directing design toward the team’s future needs.

The floorplan of the main office building and training facility of Twin Cities Orthopedics Performance Center resembles the shape of a Viking hatchet. Fittingly, the “blade” of the hatchet will be a 6,145 square feet weight room where iron will sharpen iron.

The “handle” will feature a technologically advanced team meeting space that can double as an auditorium with seating for 180 and connect to the future Vikings Entertainment Network studio. It also will include a permanent draft room and three stories of offices, totaling 184,372 square feet.

Architect, Doug Osborn, said at a Vikings media briefing back in May:

It’s not your typical office building that you would see anywhere else throughout the metro What we really strived for was to exemplify what the Vikings stand for and harken back to the history of the Vikings and play off the innovative technologies that are available to us today. 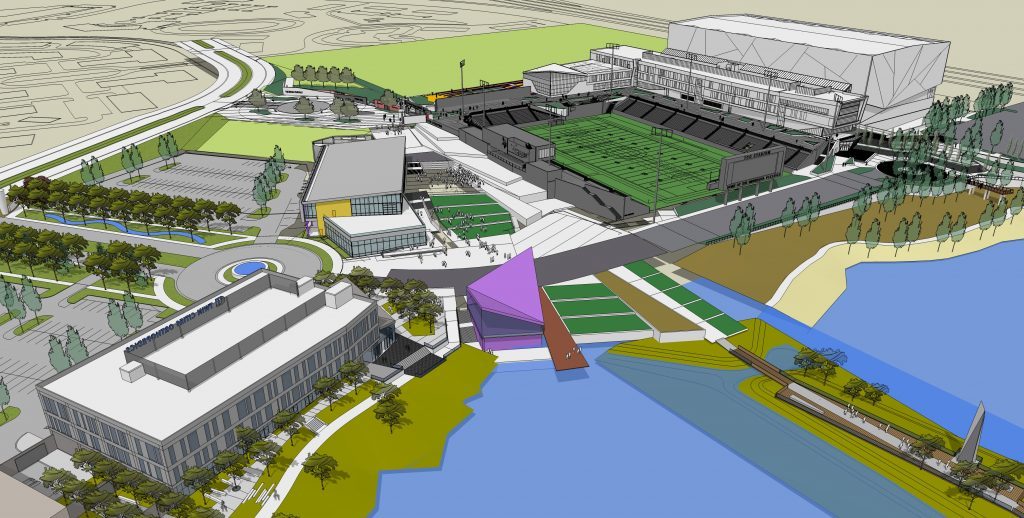 An indoor practice facility (92,630 square feet) with enough height clearance to allow punting will be situated north of the handle, and TCO Stadium — a 6,500-seat venue that will be expandable for a crowd of 10,000 — will be on the south side and able to host high school sports and community events.

TCO Performance Center will bring employees together under one roof, which is one of three principal goals for the project emphasised by Vikings Owner/President, Mark Wilf.

Crawford Architects is working with locally headquartered Kraus-Anderson Construction on the innovative facility that is on track to open in March 2018, and Osborn said the nature of the project and the Vikings heritage give “us a lot to work with and makes our job more exciting.”

It’s not often as architects that we get to work with organizations like the Vikings that have such a strong presence, identity and brand essence… from the very outset.

The architectural shell of the building, the systems that get integrated into the facility play off each other and give us a facility that is very much energy efficient and is conscious of the environment. At the same time, it’s a world-class facility to look at, and our hope at the end of the day is that this is setting the bar that much higher for the rest of the NFL and [other sports teams’] facilities you see throughout the world. 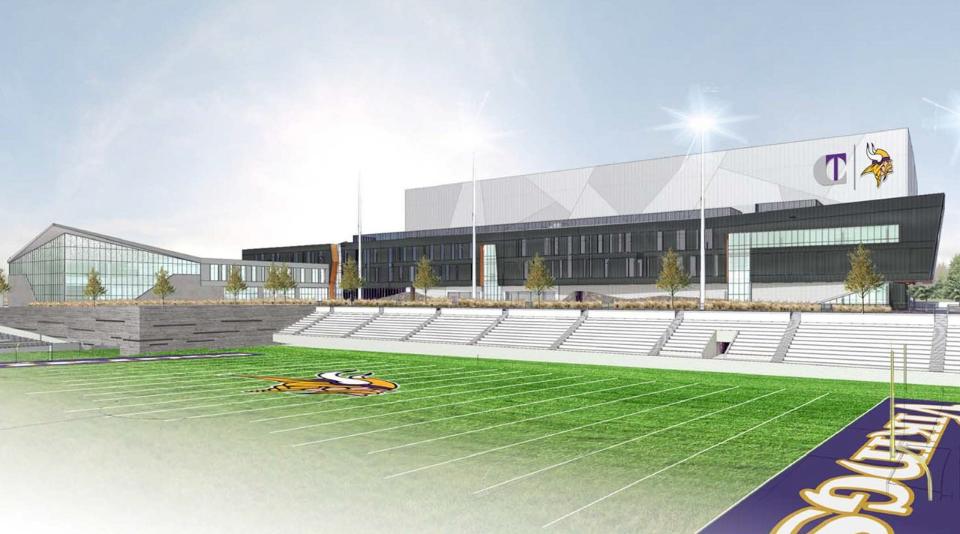 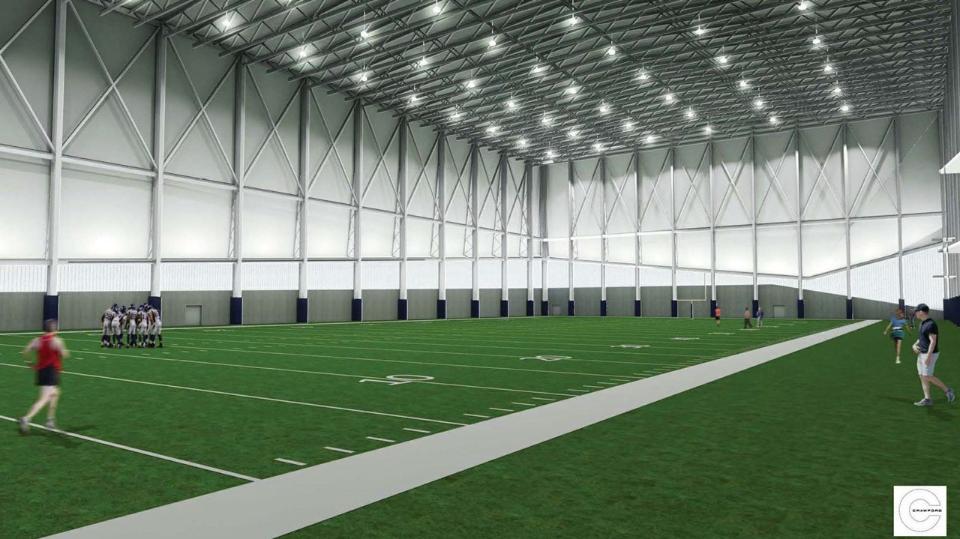 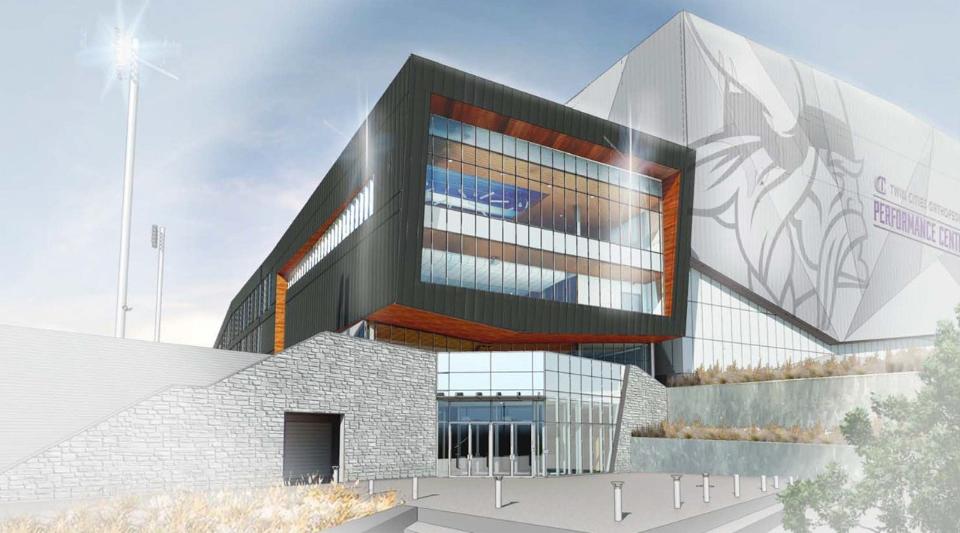 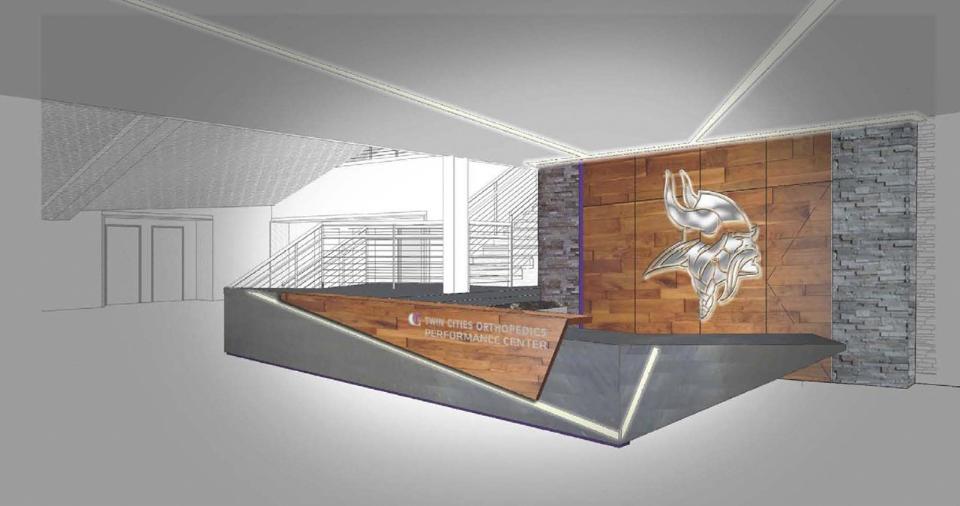 The indoor practice facility will be visible from I-494, but the space will become even more identifiable when visitors to the site use a pedestrian bridge to cross a signature water feature.

Osborn said the entry way to the main lobby will create the impression of a ship’s hull:

From the very first steps at the facility, it’s going to be very obvious that you’re at the home of the Vikings.

Mark Miller, a project manager with Kraus-Anderson, said there are 150 to 180 construction workers on site daily who are logging 6,000 hours per week. Miller said the workforce is expected to reach between 300 and 350 workers at the project’s peak. The project is exceeding equity goals for workforce and awarding of contracts and recently celebrated the topping out of its steel on a day when Stefon Diggs visited workers.

Diggs and other Vikings stand to benefit from numerous facility upgrades that will include expansions of the weight room, locker room and therapy rooms, ideally enabling the Vikings to compete for championships annually.

We’re excited for the opening of this new facility on March 1, 2018. We have a lot of work ahead of us in the next few months to make a world-class destination here for our Vikings headquarters, for our players to get the ultimate performance, for our staff to be under one roof, and really have a destination that the Twin Cities can be proud of and say this is a destination that Vikings fans and people from all over the country will want to come see and visit.

The Vikings headquarters, which include four practice fields, will be situated on 40 acres out of a 200-acre tract of land known as Viking Lakes. Other areas of Viking Lakes will be developed in years to come while preserving swaths of greenspace and wetlands that will be connected by public trails. There are proposals to include commercial office, residential, retail and restaurant spaces as well as a hotel/conference centre.

Twin Cities Orthopedics CEO, Troy Simonson, said his organisation is looking forward to opening two new buildings at Viking Lakes and continuing the partnership through, which TCO has provided medical care for the Vikings.

Wilf said the Vikings are grateful for the partnership with TCO and the relationship with the City of Eagan. He credited working with the State of Minnesota and the City of Minneapolis to successfully opening U.S. Bank Stadium in 2016.

The community has been so wonderful to us. It’s our 13th season [as Owners of the Vikings], and we’ve had many dreams — winning championships is our number one goal, but also to be active in the community as well as getting facilities for our fans and our organization.

We accomplished part of that last year by opening U.S. Bank Stadium, which we think is the finest sports and entertainment venue in the world… and now we think we’re going to have the state-of-the-art top facility in the world for practice and performance. It’s exciting to see a lot of our vision coming to reality. 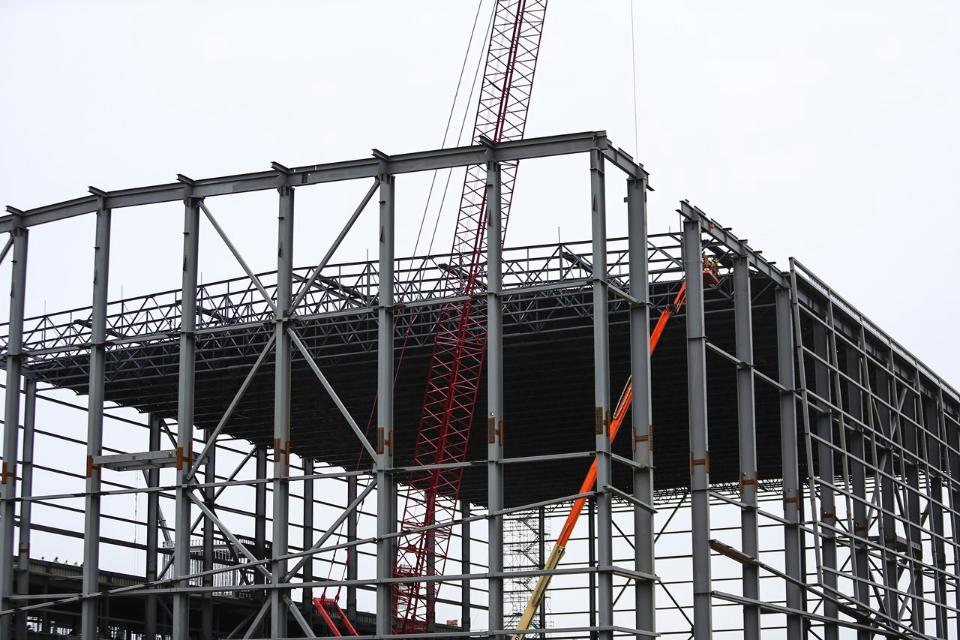 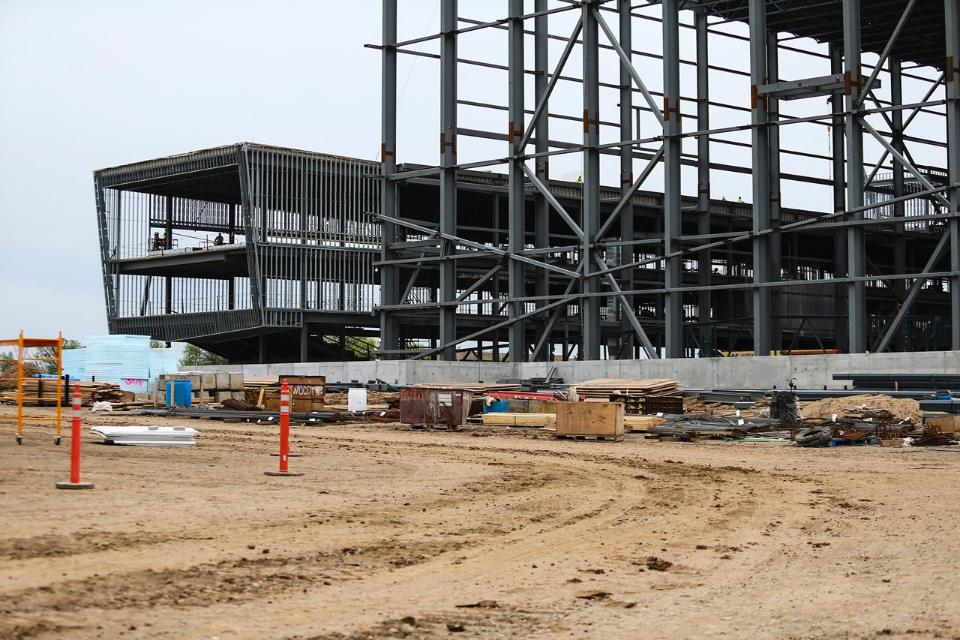 Check out progress on the Twin Cities Orthopedics Performance Center by clicking here to watch a video showing the latest status.

Crawford Architects are a valued supporter of Sports Venue Business (SVB). Find out more about the practice by checking out their SVB Directory listing, simply click here for further information.