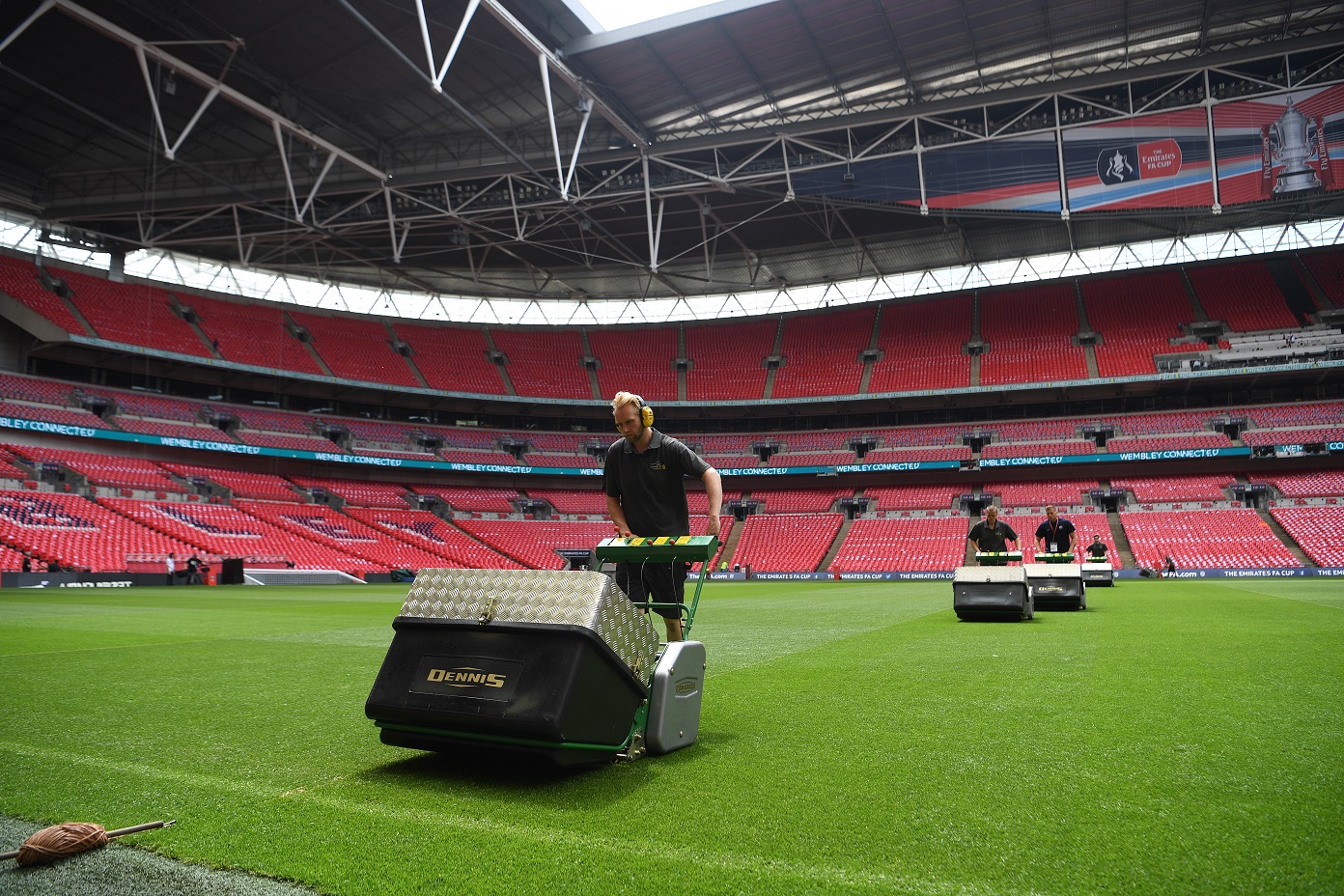 Katie McIntyre chats with Karl Standley, Head Groundsman at Wembley National Stadium, to get his insights on the challenges of managing and maintaining the world-class venue’s hallowed turf.

As Head Groundsman at Wembley National Stadium, what are your main responsibilities? And what does a regular working week entail?

My job is to ensure the Wembley Stadium pitch is maintained to a world-class standard. As the National Stadium, Wembley hosts a full calendar of events all year round and it’s my responsibility to keep the playing surface in prime condition.

A regular working week before an event would start with removing the lighting rigs and setting up a cutting plan for the week, which will be based around weather and any event rehearsals. The playability of the surface is continually monitored by taking daily tests of the pitch. I’d also spend the week working closely with the stadium’s event team to ensure the event day runs to plan.

At Wembley we have a Desso Grassmaster system. The infrastructure in the stadium consists of a SubAir system (the same system used at Augusta National and MLB Met’s Stadium in the US), integrated undersoil heating system and an artificial lighting system. Due to the stadium’s microclimate, we have to artificially grow our pitch due to Wembley being in complete shade from late September through until late March.

As England’s National Stadium, Wembley not only hosts a number of different sporting codes, but also large scale music concerts. What are the specific challenges of retaining the ‘hallowed turf’ in perfect playing condition when it comes to a multi-use venue such as this? And how do you address these?

The stadium bowl creates its own microclimate, which can make growing grass difficult. We have to use several artificial practices with our lighting rigs, under soil heating and sub air systems. In the cold of winter the air temperature may be 1-2 degrees within the stadium, but due to the infrastructure we have, I now have the capability to keep the soil temperature at a constant 17 degrees to ensure we keep the pitch at a world-class standard for all the events at Wembley.

Management, planning and teamwork into each event are critical.

For concerts, the pitch is covered with a Terraplas turf protection system.

What should a successful Pitch Management System include?

To be honest, my most valuable management system is having a strong team around me. We see ourselves as a family and work hard to make the pitch look its best. The job is about looking after the pitch but it’s also about having a team that is happy, and able to continually learn and develop their skills for the future. 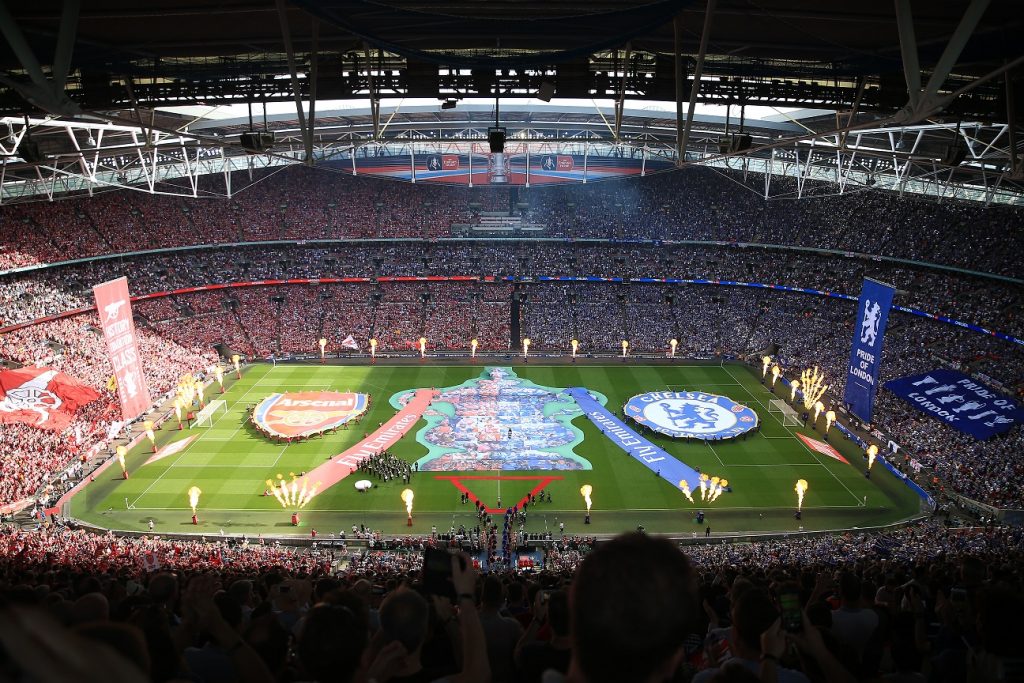 LONDON, ENGLAND – MAY 27: Pre match entertainment, Flames and pyro, 2 x banners, Giant FA Cup banner, General view inside, up top, high angel during the Emirates FA Cup Final between Arsenal and Chelsea at Wembley Stadium on May 27, 2017 in London, England. (Photo by Ben Hoskins – The FA/The FA via Getty Images)

How important is regular maintenance and what kinds of maintenance would you perform on a weekly/monthly basis? How does this change pre- and post-sporting & non-sporting events?

Due to the stadium’s unique microclimate and busy event schedule, regular maintenance is essential. We cut the surface daily, weekly aeration, use artificial lights to create the right environment for growth and implement a planned specialist fertiliser schedule to ensure the plant has all the nutrients it needs going into events for performance and out of events for recovery. The variation in events is a huge challenge for us but something we thrive on. No event is ever the same and with Wembley having football, rugby, NFL, concerts and boxing, we are constantly thinking outside the box.

What kinds of cutting-edge technologies do you currently employ?

We have a sub-surface aeration system, which controls moisture content and oxygen levels in the upper root zone. This is beneficial as it ensures we can grow a healthy grass plant within our microclimate and busy event schedule.

How do you keep up-to-date RE: emerging technologies, best practices, etc?

I’m always reading relevant articles and magazines, but probably more importantly I’m always communicating with other groundsmen. As a Head Groundsman, I’m always developing. Talking, listening and learning from others in the industry, not just in the UK but in the USA and Asia, is so important and has taught me a lot in my career.

What types of developments do you have planned for Wembley in the next 12-24 months?

We’ve got a busy season ahead with the England team playing some important 2018 World Cup [2018 FIFA World Cup Russia™] qualifiers, Tottenham moving into the stadium for their [English] Premier League (EPL) and European fixtures, and two NFL fixtures to look forward to. This year will be mainly about management and working closely with the events team to make sure we successfully deliver an increased calendar of events.

My advice would be to listen and learn. Never look as things as problems, but rather as challenges. Get experience within the industry at all levels; get involved in everything you can get involved in and never hold back.

The advice I wish someone had given to me: listen and learn more at school. 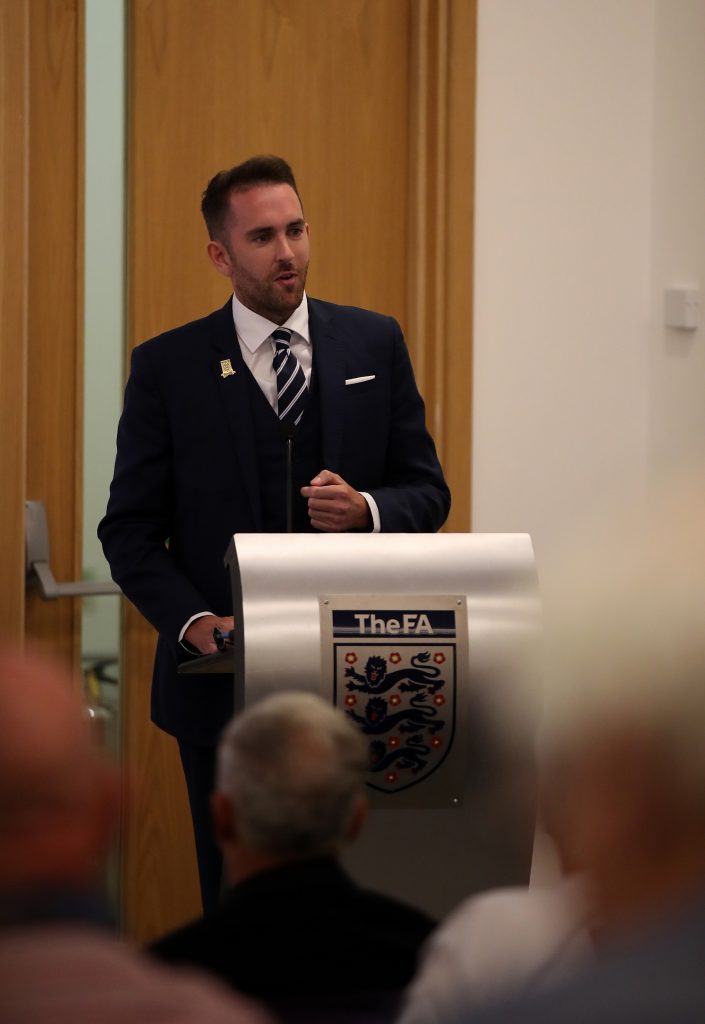 BURTON-UPON-TRENT, ENGLAND – AUGUST 16: Karl Standley from Wembley Stadium speaking during The FA Groundsman of the Year Awards at St Georges Park on August 16, 2016 in Burton-upon-Trent, England. (Photo by Lynne Cameron – The FA/The FA via Getty Images)

Huge thanks to Karl and the team at Wembley National Stadium/The FA.

Main image (top): LONDON, ENGLAND – MAY 27: Ground staff look after the pitch during the Emirates FA Cup Final between Arsenal and Chelsea at Wembley Stadium on May 27, 2017 in London, England. (Photo by Michael Regan – The FA/The FA via Getty Images)