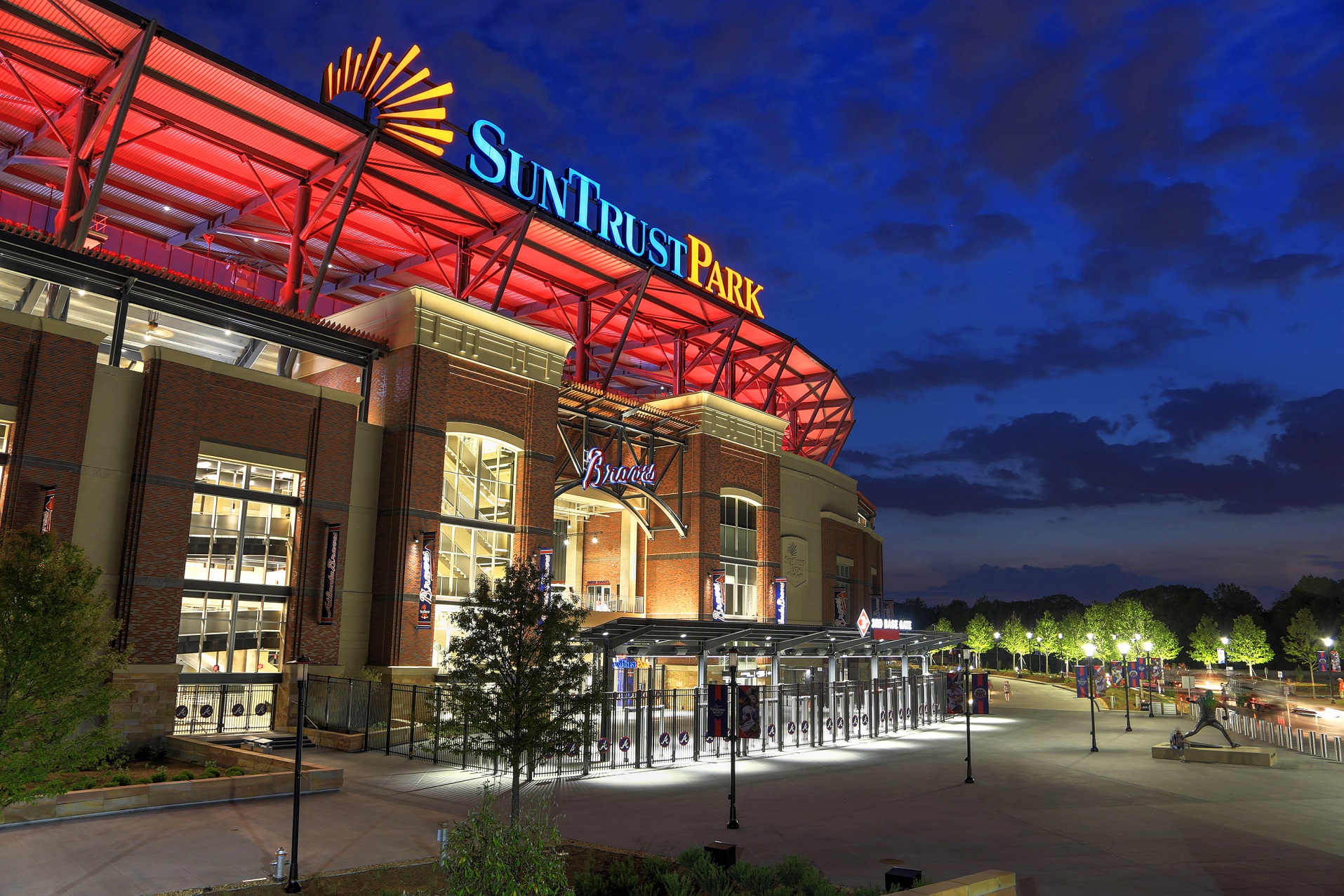 The brand new US$672m home of the Atlanta Braves, SunTrust Park, combines the best of a classic ballpark with the next evolution of southern hospitality. Anchoring The Battery Atlanta, one of the largest mixed-use developments of its kind, it brims with energy year-round. And on gameday, it truly shines.

Designed by world-renowned architectural practice Populous, the shiny, new 1,100,000-square-foot venue features three overlapping decks, with the middle and upper decks cantilevered over each lower deck, bringing the 41,149 seats closer to the action than ever before.

SunTrust Park also sports the largest canopy in Major League Baseball (MLB) – approximately three times larger than most ballparks – along with several indoor spaces and clubs to ensure the most comfortable environment during any type of weather. 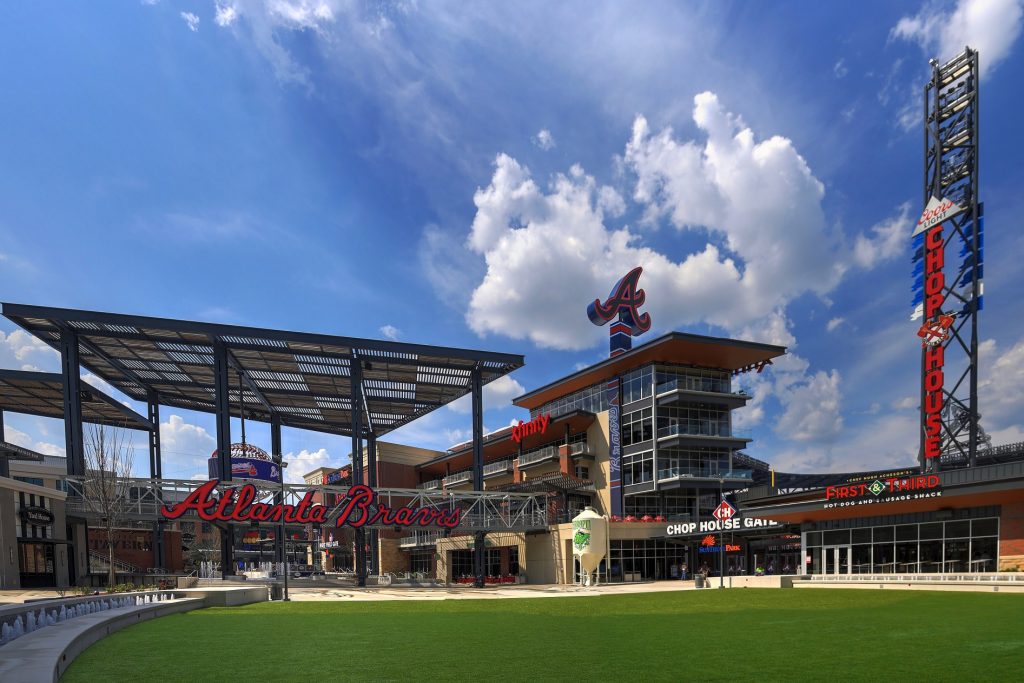 Wider concourses, most with direct views to the field, allow fans easy access around the ballpark to specialty food and beverage areas, which means that when they do get up from their seats, there is no shortage of comfortable gathering places to greet them, from the Xfinity Rooftop in right field to Monument Garden, and many more. 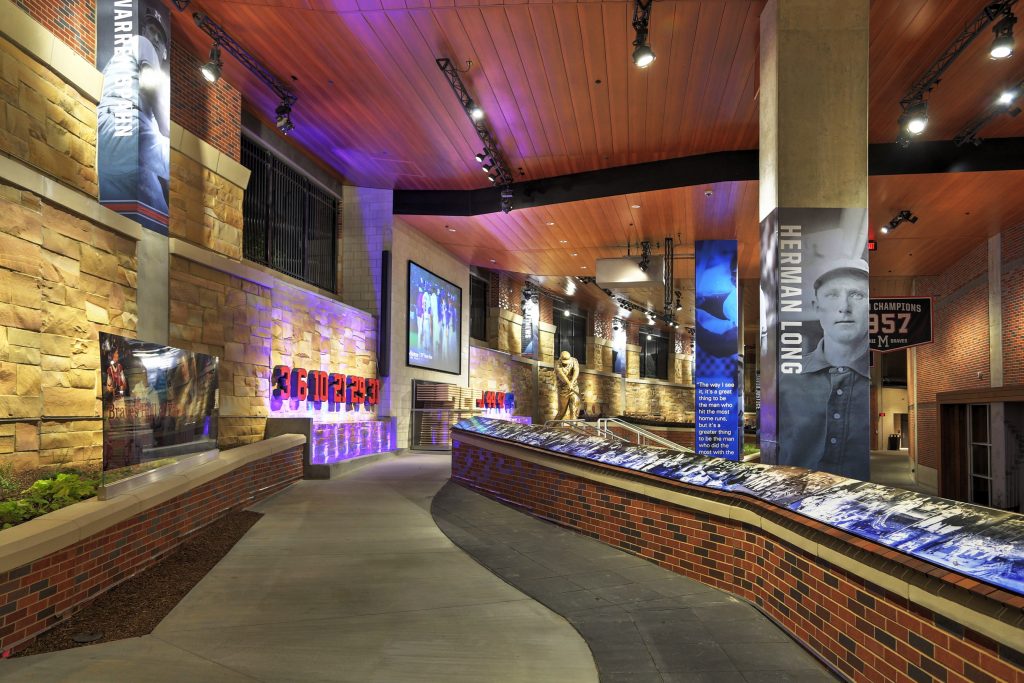 In terms of technology, SunTrust Park’s offering is significant, with high density wireless connectivity (DAS and Wi-Fi), a large HD video board, an IPTV system, distributed sound system, video coaching camera system and a security system including high resolution camera surveillance of all 41,149 seats. Each of these systems is supported by a copper and fibre optic infrastructure that interconnects the 32 IT equipment rooms, a 1,600SF data centre, a 4,000SF wireless equipment room and a scoreboard control room.

And when it comes to hospitality, the new ballpark truly shines, as Populous Joe Spear advises in his article:

Major League Baseball depends on both a love of the game and a love of the ballpark. With 82 regular season engagements a year, each team and its fans spend ample time in their home confines.

It should come as no surprise then that making guests feel at home – hospitality, in other words – plays such an important role in the success of the league. Its Atlanta Braves have pioneered the concept of big league hospitality for decades as the league’s longest continuous franchise.

The team’s new SunTrust Park and its larger mixed-use development, the first of its kind, represent the next evolution of hospitality in American professional sports. You could chalk it up to the stereotype of southern hospitality, but there’s more to the story.

The Braves cast as wide of a geographical net as any ballclub. Until recently, at least in baseball time, they were the only big league team in the United States’ entire southeast region. That’s a corner of the country spanning at least seven states and 354,000 square miles depending on who you ask.

The media-savvy Ted Turner seized on this opportunity, acquiring Braves television rights in 1972. His Turner Broadcasting System (TBS) beamed Atlanta Braves games into millions of homes across the region and country. The ballclub would come to be known as “America’s Team” as it reeled off division titles in the 1990s.

Fast forward to current day and the region’s baseball roots still run through Atlanta. Using data from its millions of users, Facebook created an MLB ‘fandom map’ that illustrates just how many state lines the Braves’ footprint still covers. It’s an impressive graphic.

The implications from a design standpoint are huge. When all those out-of-town fans arrive at the ballpark, they unpack their bags and stay a while. The action between first pitch to final out remains the main attraction, but it’s part of a larger entertainment ecosystem. The Braves organization is keenly aware of this.

That’s where The Battery Atlanta development comes in. From a concert hall to bars and restaurants, it offers no shortage of options for people to play while they’re not catching a game. The destination also includes an impressive number of residential units for locals to live and infuse the place with more personality.

Front office leadership was front-and-center in creating the environment, one League Commissioner Rob Manfred went so far as to call “revolutionary” during a recent interview with the Associated Press.

A Braves fan’s journey, for example, starts when they check in at the four-star hotel that sits just beyond the outfield. From there, it only gets better.

In order to create a timeless ballpark, you must design so that fans fall in love with your creation. If you achieve that, you’ve done something which will survive for generations.

SunTrust Park is the culmination of more than a quarter century of experience at Populous designing Major League ballparks. Like our 19 other MLB venues, it prioritizes the fan experience above all else. It is the next generation.

Three overlapping seating decks give fans the sensation of being right on top of the action. Built for one purpose, its sightlines of the field are second to none. Those sightlines even extend to the concourses, which all enjoy a view of the action on the field.

Looking up, the largest canopy in baseball, three times bigger than some, protects a majority of seats depending on how the Georgia sun is shining. Seats in the lower level also feature mesh bottoms and backs to increase air flow and keep fans cool during the summer.

No longer stuck to their seat in both the literal and figurative sense, ticket holders can get up and explore the several neighborhoods that together make up the ballpark.

There’s the kids’ area that lies beyond center field and features a tree house, climbing tower and zip line, another MLB first. Monument Garden, nestled behind home plate, celebrates the Braves’ greatest moments and players. Hank Aaron is, of course, featured prominently there.

In right field, fans can grab an exclusive craft beer at The Terrapin Taproom or chill their Coors Light in a refrigerated cup holder at the new Chop House.

All that doesn’t even touch on the ballpark’s premium interior spaces our interior design team infused with rich textures, warm lighting and authentic materials. My teammate Mason Hansen details those spaces more in a recent post.

SunTrust Park marks the Braves’ third home since moving to Atlanta more than 50 years ago. First came Atlanta-Fulton County Stadium, born from the 1960s multi-purpose stadium craze. Next was Turner Field, a ballpark refashioned out of Atlanta’s 1996 Olympic Stadium.

What do all three have in common? A team eager to open its doors and host guests near and far.

Joe Spear is a Populous founder and Fellow of the American Institute of Architects (AIA), the organisation’s highest honour. In a career spanning 30-plus years, Joe has designed more than 100 arenas, stadiums and ballparks that capture the spirit of their communities. 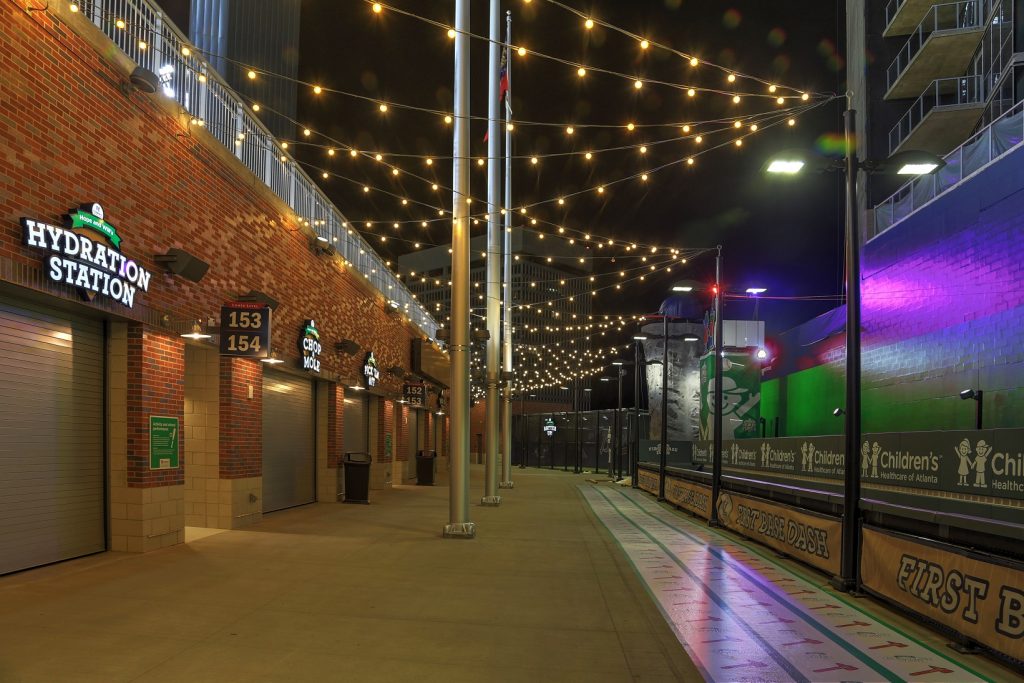 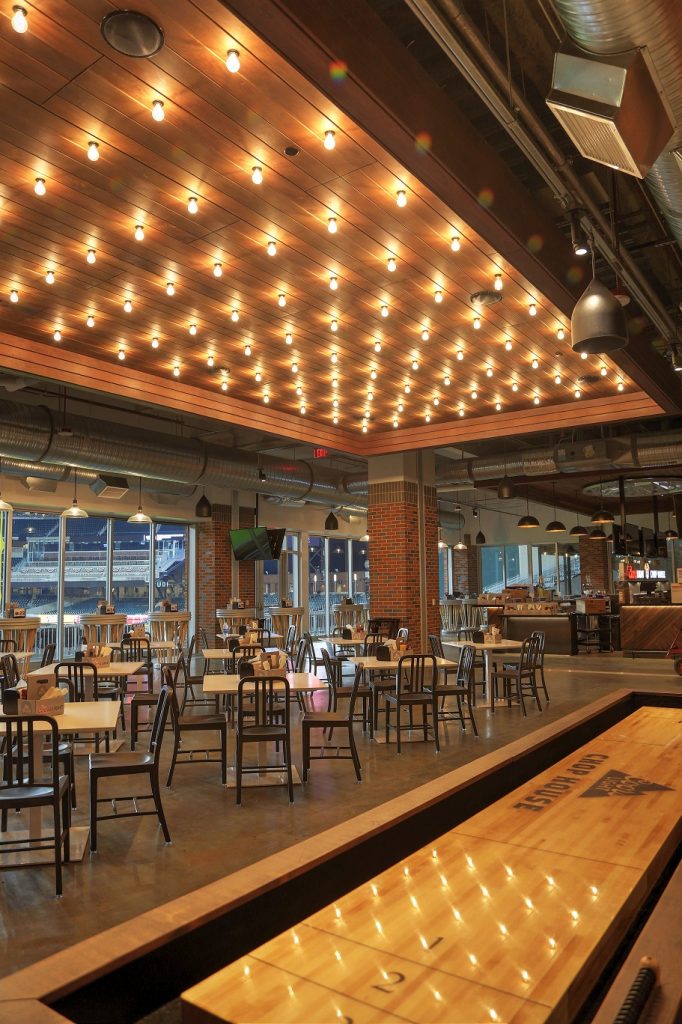 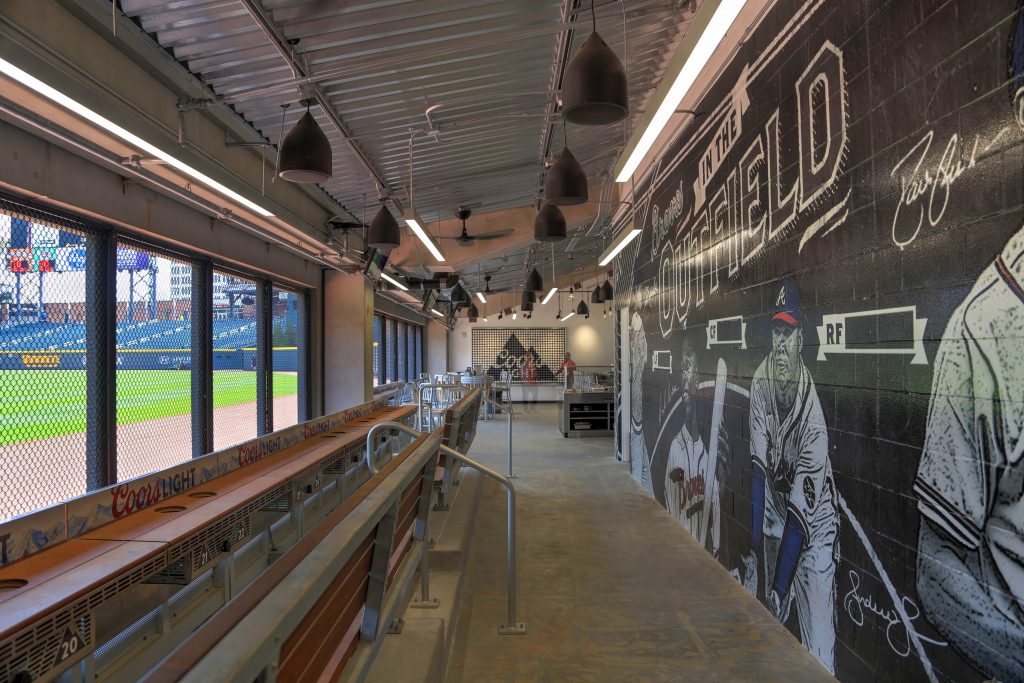