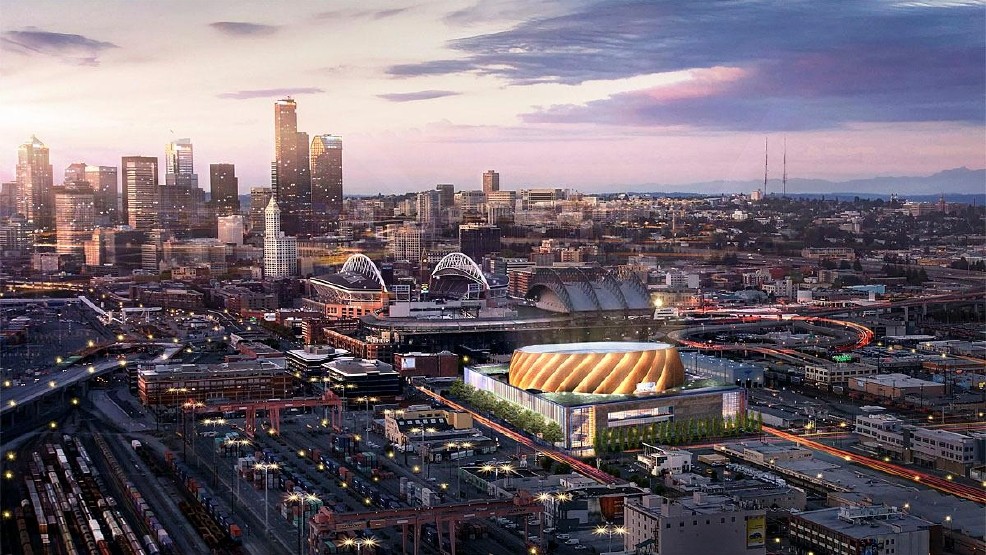 On April 6, the Seattle Design Commission approved the urban design and public benefit of the proposed SoDo Arena and recommended the conditional street vacation of a one block segment of Occidental Avenue South be approved by the Seattle City Council.

The video that has been produced to explain the latest situation, is a condensed version of the team’s presentation to the Design Commission, highlighting how the new proposal addressess the concerns raised by the Seattle City Council, including additional public benefits, mobility improvements for the Seattle freight community, and importantly, the SoDo Arena project is now 100% privately-funded by the Investment Group (Seattle Arena Group) working to build a new home for the Seattle Supersonics.

You can watch the video online at: http://www.sonicsarena.com/blog/

The next step is for the Seattle City Council to vote on the street vacation. If approved, the group stands ready to get to work bringing the Sonics and the NHL back to Seattle!

The Seattle Arena Group’s new petition, which was submitted to the Seattle Department of Transportation (SDOT) back in February requesting the vacation of a portion of Occidental Avenue South to allow construction of the SoDo Arena. If approved by the City Council, this conditional street vacation will finally put the Group in a position to work with the NBA and NHL to acquire teams for Seattle.

Since the last street vacation petition was submitted, the Investment Group and their team – including world-renowned architectural practice, HOK Sport + Recreation + Entertainment – have reworked their proposal to address the concerns raised by Seattle City Council members.

This new petition incorporates all amendments to the previous version considered by the City Council, and builds on it with several important differences:

Also, since the City Council considered the previous street vacation petition last year the long-stalled Lander Overpass project is close to being fully funded, with the SoDo Arena making a contribution to that important freight mobility project.

In addition, the Community Benefit Agreement and Labor Peace Agreement remain in place.

All told, the new benefit package totals almost US$27m, not including the mitigation that will be required by the Master Use Permit approval or the cost of purchasing the section of Occidental.

The years-long Environmental Impact Statement for the arena proved that this little-used section of Occidental will have minimal effect on the flow of traffic through the stadium district. Just like the vacation of Occidental that was approved for Safeco Field two blocks north of the Arena site, the public benefits of the new venue will far outweigh the minimal effect.

…approving the street vacation will not interfere with the City’s RFP process for Key Arena. Any Key Arena renovation plan will take 5-7 years to complete. Our plan, on the other hand, can be ready to go quickly with the street vacation. This puts the city in the best position to take advantage of any franchise opportunities.

At the end of the day, our #1 goal is bringing the NBA and NHL back to Seattle, and we look forward to working with the Mayor and the City Council as they consider the revised petition.

Komo News summed up the current situation in the city of Seattle, where a total of three parties are in the race to deliver a much-needed arena:

Seattle is in the midst of an arena showdown involving three groups and two sites. It’s an intricate dance weaving interests of private investment, public facilities, political pressures and passionate fans. A decision expected by the end of June will shape how Seattle moves forward.

“This is a once in a generational opportunity, and we have three, potentially three, investor groups willing to invest upward to half a billion dollars each,” said Brian Surratt, the director of the Office of Economic Development for the city of Seattle. “So let’s understand all of our options.”

From afar it may sound like more noise about an arena emanating from the upper left-hand corner of the country. More talk of whether the NHL will expand and if the SuperSonics will ever return.

Dig deeper and there is real substance and real risk. Three groups all talking of privately financed arenas that ask for no public investment, but none with the upfront promise of an NBA or NHL franchise as an anchor tenant to call that building home.

Nearly six years after he started, investor Chris Hansen is still trying to get an arena constructed on land he owns near Safeco Field and CenturyLink Field, the two current pro sports stadiums in town. He has become the choice of fans who are tired of delays stalling the process as Hansen has faced opposition from some city officials and maritime interests.

New to the conversation in the past six months is talk of revitalizing KeyArena, the former home of the SuperSonics that was deemed outdated and a catalyst for the team bolting to Oklahoma City in 2008. Arena giant AEG is one of those expected to submit a plan for renovating KeyArena. The other is the Oak View Group, headed by industry leader Tim Leiweke.

The city acknowledges some kind of investment must be made in KeyArena to keep the city-owned facility updated. Both AEG and Oak View may come back with plans saying the cost is too high or the engineering is too difficult to make KeyArena viable for the NBA and NHL and turning the building into an entertainment venue is best. That’s what Hansen is hoping.

But if either group says KeyArena can again be a pro sports facility – even with a litany of issues from a historic roofline to nightmare traffic – the next few months will turn into a politicized campaign around the two sites until a recommendation is made to Seattle Mayor Ed Murray, who ultimately has the final call.

“What we see is what others see. This is the largest, single metropolitan area in all of North America that today does not have a winter sports team and does not have a world-class arena,” Leiweke said.

So why is Seattle suddenly this hotbed of arena talk, years after the NBA said so long to the city after 41 years?

Few markets in the country can match Seattle’s recent growth. Whatever the indicator – jobs, housing – Seattle has been on an upward tick that would make investors jump at the opportunity to enter the market.

Seattle – the No. 14 media market in the country – also is the only market in the Top 25 nationally that does not have an NBA or NHL team. It’s the outlier in the winter sports marketplace.

“The growth of the city, downtown, is almost second to none. … You have a corner on the crane market worldwide,” Newman said.

But the debate still hinges on whether to create an arena first, or lure a team first and let the arena follow.

Since he first started down this road, Hansen has said he will not begin construction until a team is acquired. That was his position when there was public investment involved. That remains his stance now that he is privately financing his project.

Newman and Lewieke both believe the arena must come first and neither league will entertain putting a franchise in a market until the arena is at or near completion. Newman pointed to his company’s latest venue – the T-Mobile Arena in Las Vegas – as a perfect example. The arena was built; a prospective owner stepped up; a franchise was awarded.

But they both cautioned the financial model for constructing the arena has to work without a team guaranteed. That’s another major risk for a city-owned facility.

“I do not believe they’re coming here until you figure out a way to get an arena built, and you better be prepared to make that arena work without the two because you’re not going to have that guarantee in your back pocket,” Leiweke said.

Hansen spearheaded this entire arena debate starting in 2011 and stayed with the process through numerous setbacks from his failed attempt to buy the Sacramento Kings to last year’s surprising Seattle City Council vote that blocked a needed street closure for his arena plan.

Hansen said he understands why the city looking at its options for KeyArena being it’s a city-owned asset, but hoped those involve understand the limitations of a remodeled building. The timeline for eventually landing an NBA or NHL team would be significantly lengthened.

“My opinion, we’ve had a lot of false starts here and the leagues are likely to look at the long-term track record of Seattle political process with some inherent skepticism, both our project and to KeyArena,” Hansen said.

Main image (top): This artist rendering provided by the Seattle Arena Group, shows a proposed new arena in Seattle, which could house an NBA basketball team and an NHL hockey team, is shown with a round golden roof feature at lower right next to the existing NFL football CenturyLink Field and the MLB baseball Safeco Field. Seattle is in the midst of an arena showdown with three groups putting forth proposals around two sites to build the possible future home for teams from in the NBA basketball and NHL hockey leagues. (HOK Architecture/Seattle Arena Group via AP)