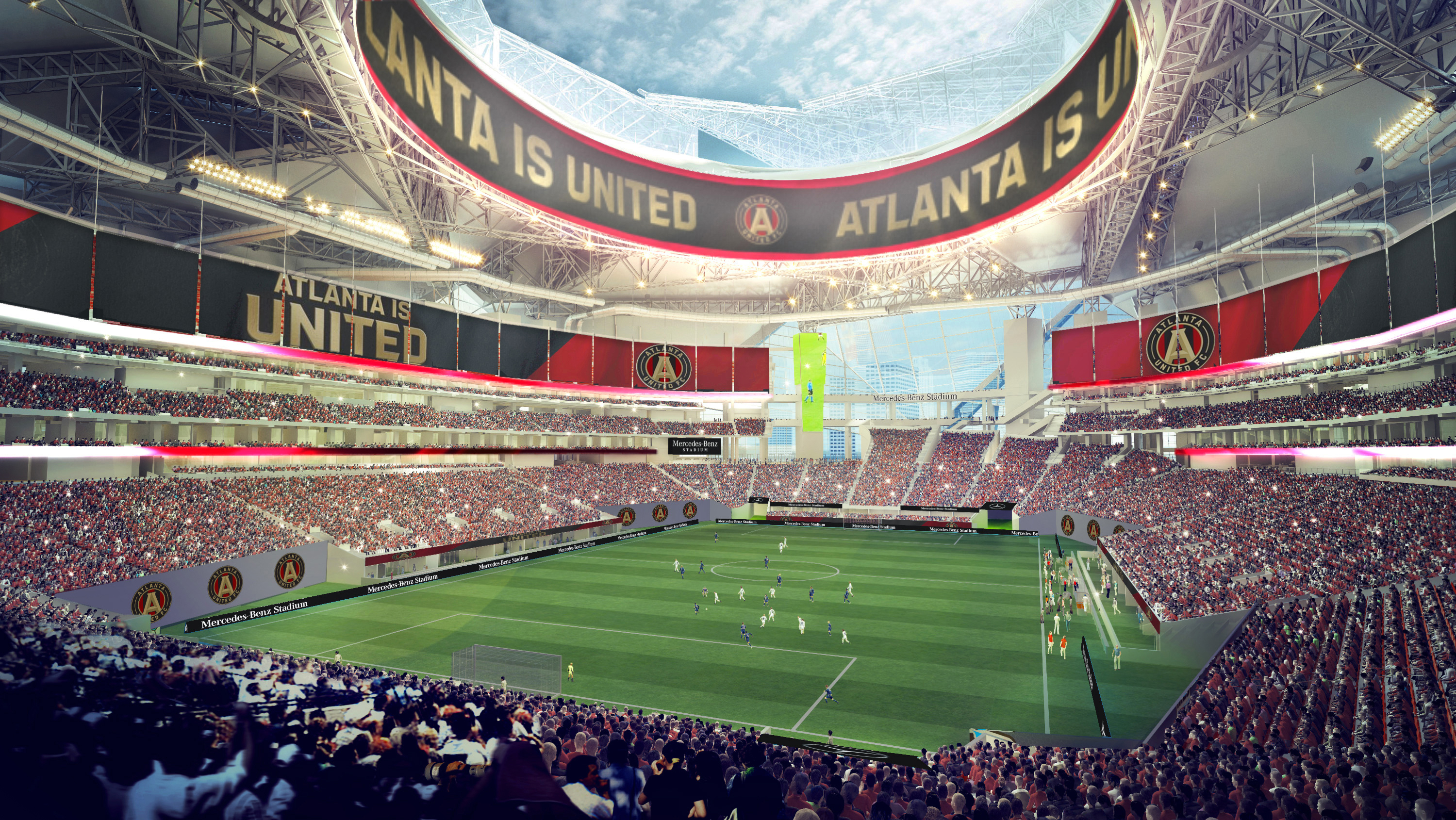 The future home of the Atlanta Falcons and Atlanta United is scheduled to open on July 30. With a bevy of signature elements, including its oculus and operable roof, halo board and mega column, VR-infused loge suites and fibre-to-the-edge technology architecture, will its “Fan First” philosophy and programming deliver the industry’s next iconic design? The ALSD’s (Association of Luxury Suite Directors) Jared Frank reports.

Walking the wide yet winding Mercedes-Benz Stadium corridors requires different navigation each day. Today, a wall that wasn’t there yesterday blocks our path. We must find a new way around this progress.

The concrete sweats, our safety googles fog in the cool, damp air. Under heavy, wintry clouds, a hive of activity buzzes around our hard-hat journey. Fifteen hundred worker bees bend metal into honeycombs never seen before in the venue marketplace. Cranes, two of which are among the world’s largest crawler cranes, hoist the unique fabrications and plant them amongst a forest of fixed-roof steel overhead.

A total of six cranes lift the job site today, the least number of cranes in months. As the Georgia Dome preps for its demolition, 84 feet away, Mercedes-Benz Stadium enters its final stretch of construction. Some spaces are already punched, including some concession stands and suites.

Scott Jenkins, General Manager at Mercedes-Benz Stadium and the ALSD’s tour guide for the day, said:

It’s exciting to see some of this stuff getting close to the finish line. Between now and roughly six months, we’ll see it come to the finish.

Now scheduled for a July 30 opening, the nearly two-million-square-foot venue will host up to 80,000 fans for two anchor tenants – the NFL’s Atlanta Falcons and MLS-expansion franchise Atlanta United – as well as a gamut of major events, including Super Bowl LIII.

But any drive to the end zone is beset with many starts and stops. Progress never moves in a straight line.

Now blooming out of the downtown Atlanta soil is an iconic-looking structure, progressive and forward-looking in terms of its design and technology, and one intended to serve as an international symbol for the state of Georgia and the city of Atlanta. These initial cues came straight from Arthur Blank, Owner and Chairman of AMB Sports & Entertainment – the parent company of the Falcons and Atlanta United.

When we came in with this concept in the interview process, the Falcons were either going to love it, or they were going to hate it. It wasn’t going to be in the middle. We swung for the fences so to speak. And it fulfilled a lot of [Arthur Blank’s] preconceptions about what he wanted the project to be.

Out of the initial ideation came a thesis that the energy of football and soccer is focused in the centre, resulting in the iconic oculus roof, reminiscent of the Roman Pantheon. Also inspired by the Falcons logo and team colours, Johnson created the mesmerising exterior geometry of the building.

There was something about the falcon’s wings in flight that I really loved. And so we thought about overlapping shapes and forms that would look like a falcon’s wing.

Combining the oculus with the falcon’s wing inspirations, Johnson next created a first-of-its-kind retractable roof design – a grand departure from the simple single-panel or bi-parting-panel designs typically enclosing sports and entertainment venues, as he explained:

We thought about what would actually focus energy in the middle, look like motion, look like a falcon wing in flight, and we came up with the idea that the roof could actually move in a radial way, away from the centre. That became the inspiration for the skin and for the materials, for the seating bowl, and everything really followed that idea. 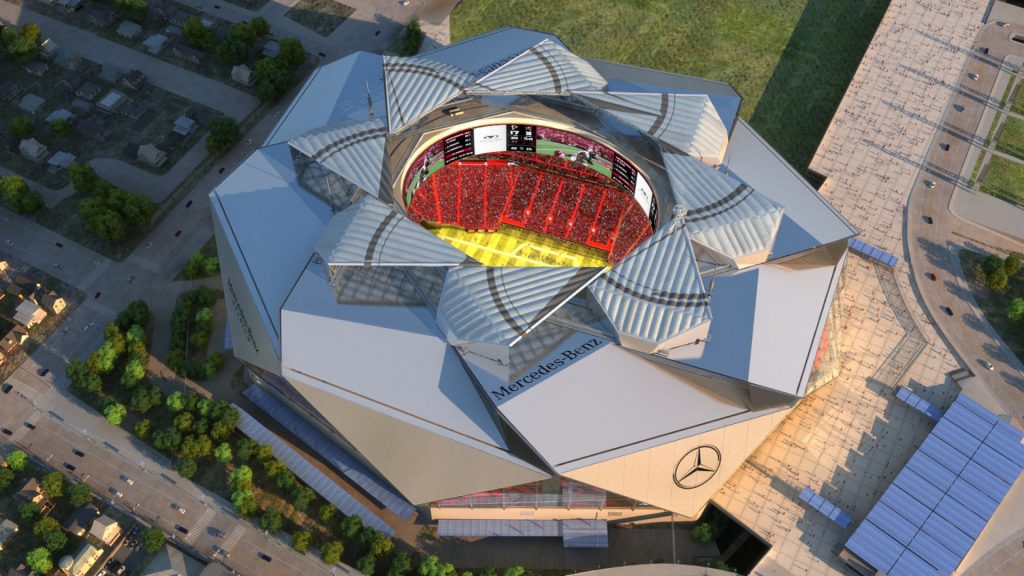 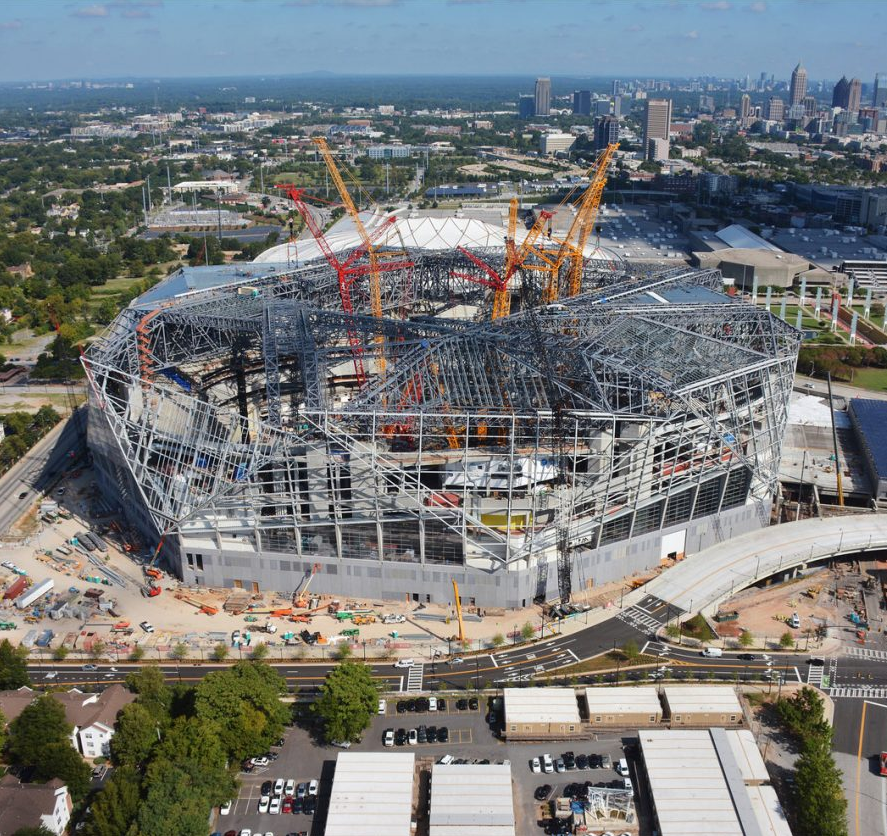 First conceived as a circular opening, the roof geometry was simple. Eight congruent segments with congruent movement would easily come together to close the roof. But after stadium designs were refined, the circle stretched to an oval, introducing complicating variables. Now the pieces vary in shape and size, and move slightly faster or slower over distances slightly longer or shorter than one another.

Tried-and-true technology guides the wheels and tracks, but the development of the roof mechanisation, designed by Minneapolis-based Uni-Systems, is something the industry has never seen before. Each cantilevered puzzle piece has six drive bogies that each have two 7.5-horsepower motors for a total of 96 motors.

Some in the press have expressed concerns about whether the mechanical system will successfully bring the eight roof components together to deliver a waterproof building as planned. HOK doesn’t share those concerns, as Mac McCoy, SVP and Director of Project Management at HOK Sports + Recreation + Entertainment, advised:

We’re not concerned in any way at all about the mechanisation. That’s tried and proved.

A significant milestone was achieved in December when Mercedes-Benz Stadium’s signature element was de-centred. Shoring towers were jacked down, and 36 million pounds of fixed-roof steel dropped 22 inches as planned, settled, and supported itself.

That’s a celebration for everybody because that means things can start getting demobilised and moved out of the bowl, opening up real estate so they can finish the lower level bowl.

[The roof] was spaghetti. Between the amount of cranes, the amount of steel, and the shoring towers, it looked rather chaotic. To clear that up and see the view, it’s really quite dramatic.

With the workspace now clear of the shoring towers, the components of the operable roof portion, known as “petals” (like the petals of a flower), are now being assembled on the floor. Once installed, the eight triangular-shaped pieces will open and close in approximately ten seconds. Video renderings display the roof blooming in a circular motion, but this appearance is an optical illusion. The triangles, in fact, move on a straight line.

[The roof] has been the biggest challenge construction-wise. Now that that’s up there, we’re feeling great about the momentum we have on the rest of the project to bring it to the finish line.

The 18,000 tons of 70-foot-tall fixed-roof steel trusses supporting the operable roof and overall structural loads also abut what will be the world’s largest scoreboard and create its unique shape. Mercedes-Benz Stadium partnered with Daktronics to create 60,000 square feet (58 feet high by 1,100 lineal feet) of LED board, dubbed the halo board, that lines the circumference of the building’s signature oculus just beneath the roofline.

The idea quickly diverted from putting a board in the centre beneath the oculus to surrounding that opening with a 360-degree experience. In a word, the halo board is enormous – as tall as a five-storey building and approximately 600 tons. Going from rendering to reality is a jaw-dropping visual.

Window to the City

The ‘skin’ of the building is made up of multiple systems of metal panel, glazing, and the world’s largest installation of single-membrane ethylene tetrafluoroethylene (ETFE).

ETFE is a sturdy, lightweight plastic that sheds dirt and provides transparency in lieu of glass. Designers can insert a frit (a series of dots) on the material to protect patrons from the sun. At Mercedes-Benz Stadium, the ETFE on the south and west sides of the building has a 70% to 80% opacity.

As fans move about the building, the frit dissolves. On the north and east sides, the ETFE is clear and 16-storeys tall, providing fans with exceptional views of the Atlanta skyline from downtown to midtown all the way to Buckhead through what is being referred to as “the window to the city”.

Mercedes-Benz Stadium is tracking to become the first professional stadium to be certified LEED Platinum. Efficiency characteristics include a substantial investment in solar power. In total, 4,000 solar panels will be deployed, producing 1.6 megawatts of renewable energy. About 30% less energy will be needed from the grid to power the stadium.

From a water standpoint, Mercedes-Benz Stadium will use about half as much H2O as the typical building. On site, a rainwater capture system that includes a 1.1-million-gallon storm vault feeds a 680,000-gallon cistern to be used for the cooling tower and to irrigate the site landscaping. 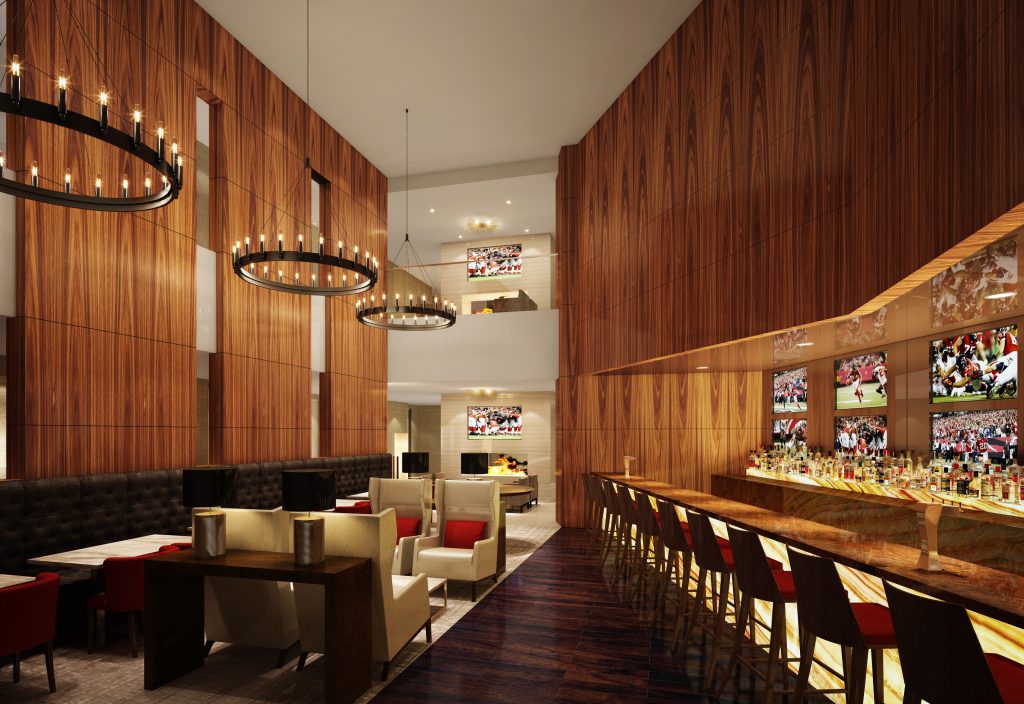 The Best or Nothing: Like the marketing slogan of its namesake brand, the Mercedes-Benz Club and AMG Lounge is the best premium destination in the new building, with its 30,000 square feet of interior space and 60-yard on-field patio. 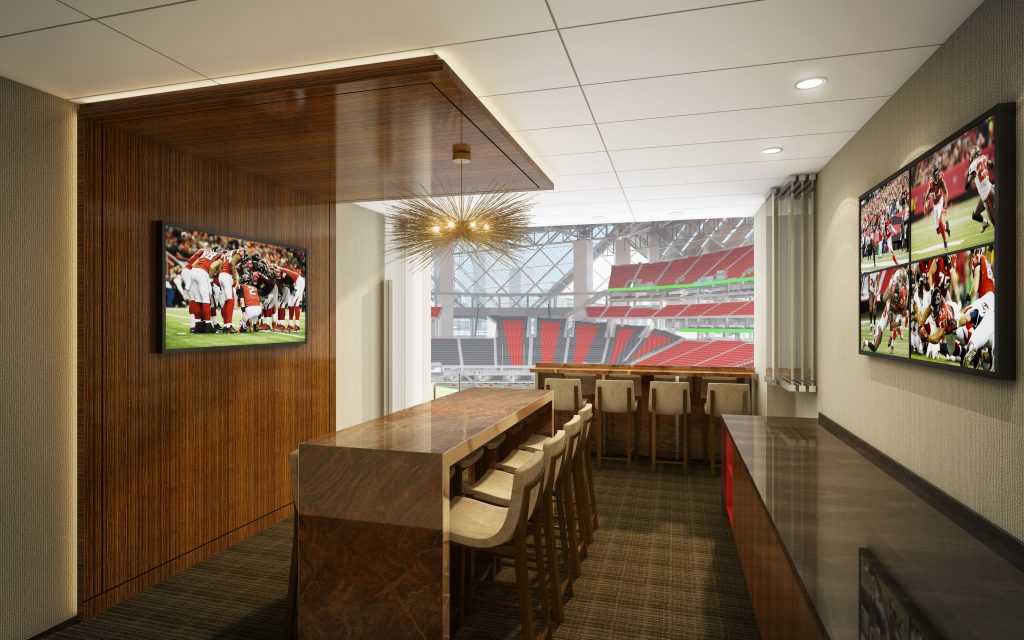 Alongside its two anchor tenants, Mercedes-Benz Stadium will be home to a full calendar of events. To support the biggest of big events, 2,700 telescopic retractable seats are located in the upper bowl. With the push of a button, capacity expands up to 80,000 for major events, such as the College Football Playoff National Championship in 2018, Super Bowl LIII in 2019, the NCAA Men’s Final Four in 2020, and the SEC Championship Games through 2027.

Sitting on the Georgia World Congress campus, walking distance to downtown Atlanta and its hotels and amenities, Mercedes-Benz Stadium is expected to be a consistent host of big events throughout the building’s lifetime.

Major League Soccer’s Atlanta United has experienced unprecedented demand with 22,000 season tickets sold and climbing. The capacity of Mercedes-Benz Stadium will shrink to 40,000 people for MLS matches by blocking off the volume of the upper bowl with a curtain system. Meanwhile, the playing surface will expand due to additional telescopic retractable seats, allowing for a FIFA-sized soccer pitch.

The Path (and Price) of Progress

Originally scheduled for a March 2017 opening, construction of the US$1.5bn Mercedes-Benz Stadium has fallen behind its original schedule, largely due to the Rubik’s-cube complexity of the roof’s structural design.

Because of the delay, Atlanta United will not begin play of its inaugural MLS season in Mercedes-Benz Stadium, instead sojourning in Georgia Tech’s Bobby Dodd Stadium until the ribbon is cut on its permanent home.

No Falcons games, preseason or regular season, will be impacted. AMB Sports & Entertainment will pay all cost overruns and rent due to Georgia Tech.

Although suboptimal, it’s the price of progress in this case. After clearing our fogged safety goggles while touring Mercedes-Benz Stadium earlier this winter, it seems patience for the nonlinear progress will be rewarded, as AMB Sports & Entertainment President, Rich McKay, advised:

What makes this project unique is the scope and size and breadth of the vision. It’s going to create a completely different product than you’ve seen before.

MERCEDES-BENZ STADIUM BY THE NUMBERS

18,000 tons of fixed-roof steel support an eight-piece operable roof unlike any design to date in the venue marketplace. Just beneath the roofline, 60,000 square feet of LED lights, dubbed the ‘halo board’, circumnavigate the stadium’s signature oculus. Amid construction, 28 technology-focused loge suites with virtual reality headsets and two iPads joined the menu of premium offerings. 65% more points of sale have been installed to meet expected increases in demand stemming from Fan First food and beverage pricing.

Which signature of Mercedes-Benz Stadium most intrigues you?

This article first appeared in the 2017 winter issue of the ALSD’s SEAT Magazine, which can be viewed online at: