Just days before last weekend’s home opener against Atlanta United FC, the Montreal Impact revealed details of the numerous enhancements that have been made to their home ground, Stade Saputo.

The club and new food concession partner Spectrum Canada made a CAN$3m private investment into the stadium ahead of the 2017 season.

The layout of the concession stands, boutiques and club partner activation spaces has undergone a complete makeover all around the stadium, allowing for better pedestrian flow and a more organic pathway for supporters.

Starting this season, we will begin to achieve an important goal of our five-year plan: improving customer experience at the stadium. We will provide a more practical stadium, with more space, more services, more choice and more innovation than ever before. With so many new stadium projects all around the league, it is of crucial importance to remain competitive and attractive. Today marks a first step in this direction.

Food services will include even more Montreal dishes, notably a new smoked meat sandwich, a giant hot-dog and Quebec-certified beef. Gluten-free options will now be available at four concessions, as well as a vegetarian menu in the suites and mezzanines. Labatt will also offer a variety of microbrewery and imported beers at an improved location.

For a better customer experience, all regular payment methods will now be accepted, including PayPal, Google Pay, Apple Pay, debit, credit – including the BMO MasterCard – and cash.

No fewer than 44 screens of 55 inches, 57 menu screens and two large screens of 7’x12’ will be installed in the stadium – supporters will not miss a second of the action.

Entertainment at Stade Saputo will also be improved – mainly before games – in order for the stadium to be even more festive, all the while remaining accessible and fun for families.

Lastly, in terms of ticket availability, new Prestige products will be available. Field-side seats will now be available on the South side, the Umberto Cesari Tower Club will be expanded and the President’s Club suite will be upgraded.

With a pristine, natural grass field, a prime location in Olympic Park and easy access by subway or car, Stade Saputo has become a privileged site for soccer in Montreal, Quebec and Canada.

The stadium was inaugurated in 2008 and constructed at a cost of CAN$17m. The sum of CAN$7.5m was donated by the Saputo family, while CAN$9.5m was financed on a 25-year term.

On March 9, 2011, in preparation for its entry into Major League Soccer (MLS), the Montreal Impact unveiled the detailed plans for the expansion of Stade Saputo, with stadium seating increasing from 13,034 to 20,801 seats. The Quebec government infused an additional CAN$23m into the stadium for the expansion. Developed by the architects at Provencher, Roy and Associates, as well as the engineers from Cima +, the expansion project was constructed by Broccolini.

To remain seamlessly integrated within the Olympic Park, the view between the Olympic Village and Olympic Stadium was maintained, thus respecting an urban planning regulation established for the Montreal Olympic Games in 1976.

After starting its inaugural season in MLS at Olympic Stadium, the Impact made its debut at his new “home” on June 16, 2012, giving its supporters a historic 4-1 win against the Seattle Sounders FC.

The Montreal Impact inaugurated on October 1, 2013, its new synthetic field. Sitting right next to the main entrance of the stadium, the field will be available for use by the club, most notably by the Impact U23, the Academy and the soccer schools, but also by the community.

Designed by Quebec business FieldTurf, the field is the first of its kind in Quebec to use the Revolution technology, which uses a more durable fibre. The field has also been given a FIFA 2 Star designation.

The expansion project at Stade Saputo included the construction of a field to respond to the needs of quality infrastructures for the youth of Mercier-Hochelaga-Maisonneuve.

A deal has also been signed with the UQAM Citadins, who will use the field for their soccer home matches.

The surface measures 68 metres by 110 metres. 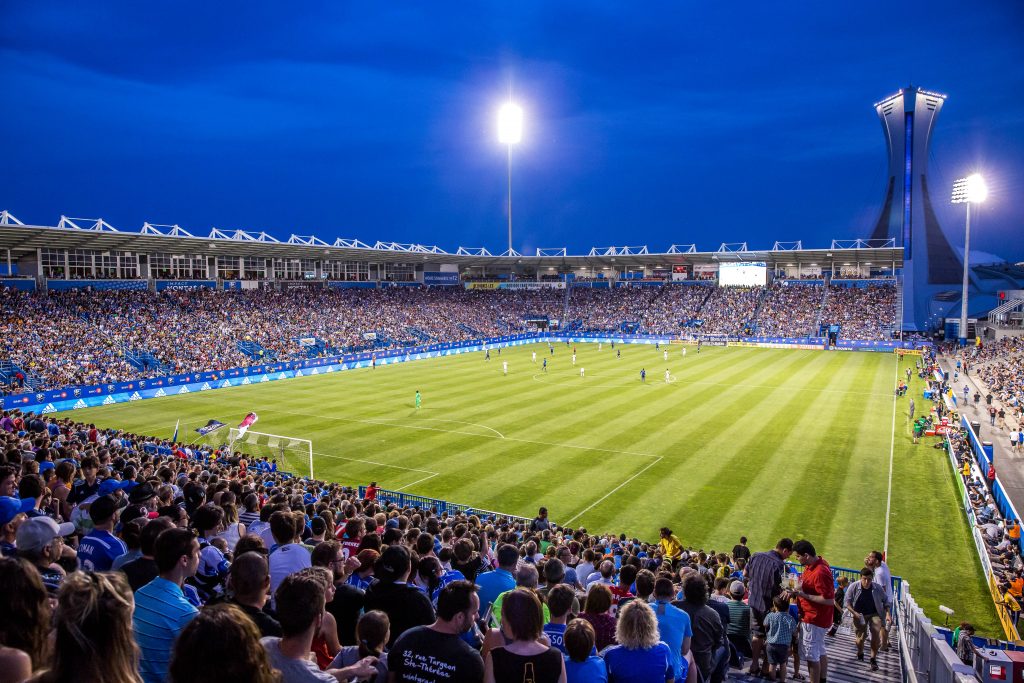