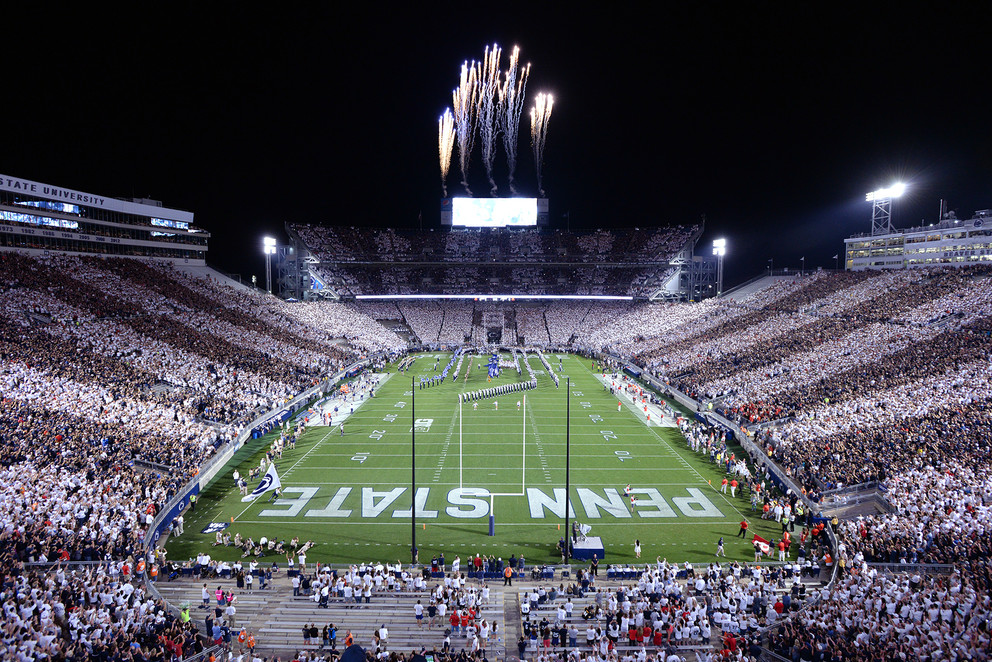 Pennsylvania State University and Populous recently completed a master plan which reviewed 23 athletic facilities through a comprehensive 20-year outlook. The largest collegiate athletics master plan to date, the study addressed all 31 sports, 800 student-athletes and all facilities operated or occupied by Intercollegiate Athletics.

Penn State Intercollegiate Athletics has now concluded its Facilities Master Plan that focuses on creating conditions for success for its student-athletes and enhanced experiences for the Nittany Lions’ passionate and loyal students, alumni, staff and fans.

Over the past 17 months, Penn State has partnered with Populous, one of the world’s leading architecture and sport event planning firms, in collaborating on programming, developing and producing a comprehensive Facilities Master Plan to address needs for the Nittany Lions for the next 20 years. The master plan creates a strategy to address year-round needs that will deliver a combination of new and renovated venues, enhance the game-day experience, and integrate the facilities within the University Park campus in a more intentional manner.

The project included facility analyses, in-depth market research and more than 80 user group and programming interviews with administrators, coaches and facilities operators. Focused on the centralisation of athletics operations and the enhancement of student-athletes and spectators alike, overall campus planning principles and goals were incorporated within the athletic district master plan.

The first five priority projects include building a Center of Excellence, a new hub for student-athlete performance and development, and a second indoor practice facility. The University also plans to build a new 10-lane natatorium, an indoor tennis facility and to renovate its soccer stadium, Jeffrey Field. The athletic department was committed to both short-term and long-term planning for every sport, looking out as far as 20 years.

The exhaustive study is a road map for one of the nation’s most comprehensive and successful athletic programs to provide best-in-class facilities that optimise student-athlete academic and athletic performance and are functional, sustainable and anticipate future growth and change.

Among some of the highlights, the Facilities Master Plan identifies five priority projects during the initial five years — falling in the next five-year capital plan — the first four of which are new construction:

Intercollegiate Athletics (ICA) leadership stresses that the master plan is aspirational in nature and that detailed architectural designs and planning for any program will not begin until funding objectives have been identified for any particular facility.

We are pleased to have completed this master planning study and to share this aspirational 20-year road map for our physical infrastructure. This has been a collaborative, engaging process with our ICA staff, student-athletes, campus partners, community and Populous. This plan continues our efforts to centralize our operations and efficiencies for our students and staff and improve amenities for our alumni and fans.

These facility resources will greatly assist in our vision of creating conditions for success for our student-athletes as we prepare them for a lifetime of impact. We look forward to engaging with our key stakeholders to most effectively and efficiently activate this plan.

Financial support for these facilities will be developed on a project-by-project basis and may include sources such as philanthropy, ICA operational revenues to support debt, corporate partnerships and the possibility of public-private partnerships or student support, where appropriate.

The master plan addresses 23 venues that Penn State’s 31 programs practice, train, compete and are housed in and the needs of its student-athletes, coaches, staff and fans. The goal was to provide ICA with a comprehensive vision for the future with a phased implementation strategy that responds to current needs, considers sustainability on a vibrant, student-centered campus, is economically viable and flexible to adjust to the dynamic and fluctuating environment of intercollegiate athletics. The study was developed and aligned with campus design standards found in the University Park master plan.

During the initial five years of the master plan, renovations will occur at Jeffrey Field, home of the men’s and women’s soccer programs, and construction is scheduled to begin on the four new facilities previously outlined and described below. The Natatorium and Indoor Tennis Facility are being developed in partnership with Penn State Campus Recreation, which has the operational responsibility of these facilities.

Barbour said that Intercollegiate Athletics will be seeking to raise a minimum of US$120m in philanthropic gifts in order for the initial five projects to commence. The start of construction for any facility is not expected to begin until the 2018-19 academic year at the earliest, the first year of the five-year capital plan related to the Facilities Master Plan.

No additional projects are slated to begin during the first five years of the master plan, although philanthropy designated for specific facilities could provide an opportunity for an earlier start date for those targeted projects.

Planning and design concepts for the Penn State Lacrosse Field began prior to the master plan study and final designs and construction will move forward as soon as the philanthropy goals are met for the project.

The Center of Excellence will be the new hub for Penn State’s 800 student-athletes, staff and coaches and will be constructed where the East Area Locker Room currently is located. The 450,000sqft facility will centralise services and other resources for student-athletes, including performance enhancement, sports performance, and sports science facilities as well as a nutrition center.  The Center of Excellence will be centrally located for student-athletes, across the street from the Morgan Academic Center. The facility will also house locker rooms and coaches’ offices for the field hockey and men’s and women’s lacrosse, soccer and tennis programs. A 500-space parking facility is included under the center.

A new 108,000sqft indoor practice facility, similar to Holuba Hall, will be attached to the Center of Excellence, providing practice space for the baseball, softball, men’s and women’s golf, lacrosse and soccer programs, as well as indoor workout space for all 31 sports. The venue could also host selected Penn State sports camps and other events.

The new 130,000sqft facility will include a 10-lane, 50m competition pool, a separate lap pool with campus recreation programming capability and a diving well that will permit diving competition from 1, 3, 5, 7.5 and 10-meter boards and platforms. The complex will have facilities for the men’s and women’s swimming and diving teams, seating for approximately 2,500 spectators and campus community locker rooms. The Natatorium will provide opportunities for Penn State to host significantly more swimming and diving events than at McCoy Natatorium, which opened in 1967, and will provide campus recreation with programming opportunities for students and others in our community far beyond current capabilities. The new Natatorium will be located either on its current location on the corner of Bigler and Curtain roads, or will be constructed just north of the Penn State’s outdoor track, near Porter Road, with a decision expected in the coming months.

This new 100,000sqft complex will feature 10 courts, facilities for the men’s and women’s tennis teams, campus recreation space, seating for approximately 500 spectators and a pro shop. The facility will be located just west of the Field Hockey Complex enabling Penn State to host a much wider variety of indoor tennis events than the current four-court facility.

Jeffrey Field, the home of the Nittany Lion men’s and women’s soccer programs, is scheduled for substantial renovations during the first five years of the master plan. The upgrades include new game day home and visiting team locker facilities, chairback seats for fans with covered seating on the west side of the facility, concessions and restrooms, a video board, media facilities and new lighting around the complex. Jeffrey Field’s seating capacity will be approximately 4,000 upon completion of the upgrades.

The primary goals of the athletic master plan were to consolidate operations and enhance the life of a student-athlete. The consolidation of activities provides opportunities for more interaction between student-athletes, coaches and administration. As a former student-athlete, that interaction is a key part of a great collegiate experience.

I would like to thank the ICA leadership planning team of Sandy Barbour, Phil Esten and Mark Bodenschatz. They were always open, honest and direct. Over the years we have built a fantastic relationship. I appreciate their dedication to the university and their diligence to provide the best opportunities for all student-athletes, coaches and staff. Ford Stryker, his team from the Office of the Physical Plant, including the Campus Planning and Design staff, have worked hard over the years to create a beautiful campus experience. Their input and direction was instrumental in developing a long term plan that cohesively integrates the future athletic vision with core campus planning goals and objectives.

In addition to the four new projects previously outlined, the master plan calls for these additional new facilities during the 20-year vision (listed alphabetically):

In addition to Jeffrey Field, the study also includes renovation or upgrades to these facilities over the next 20 years (listed alphabetically):

The timeframe for the programs not included in the first five years of the master plan are to be determined.

At a time to be determined after the initial five years, the master plan calls for substantial renovations to Beaver Stadium, which was constructed in 1960 and has expanded seven times, most recently in 2001. The upgrades include a significant increase in chairback seating, new concessions locations and food options, new restrooms, wider concourses and additional premium seating options, which alumni and fans requested in surveys conducted during the master planning process.

Once the extensive renovation is complete, which will significantly improve fan amenities and experience, Beaver Stadium will have a capacity of at least 100,000, maintaining its stature as one of the nation’s largest and most iconic facilities. Improvements to the tailgating experience around Beaver Stadium also is included in the study.

Dauer Road to be extended from University Drive to Bigler Road

The master plan also includes extension of Dauer Road, which runs on the south side of the Bryce Jordan Center from Porter Road to University Drive. The study calls for Dauer Road to continue just south of Pegula Ice Arena, with new construction extending the road between the Center for Excellence and the Field Hockey Complex, connecting with the existing road south of the Sarni Tennis Center, and on to Bigler Road.

In order to make way for the new Indoor Tennis Complex, the Center for Excellence and the extension of Dauer Road, the East Area Locker Room and indoor tennis facilities will be demolished.

Populous was also involved in Penn State’s last master plan, completed in 1996 and resulting in many facility improvements, including the new Lasch Football Training Facility and the 2001 renovation and expansion of Beaver Stadium.