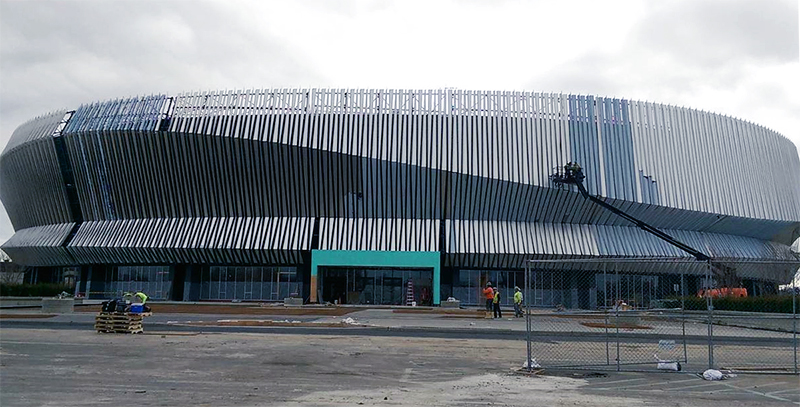 NYCB LIVE, home of the Nassau Veterans Memorial Coliseum Presented By New York Community Bank, was unveiled last Friday in a ribbon-cutting ceremony marking the highly-anticipated opening of the iconic venue. Originally opened in 1972, the Coliseum underwent a US$165m renovation and is primed to host world-class sports and entertainment, which kicked off with a special performance by Long Island’s own Billy Joel on Wednesday.

On the exterior, SHoP Architects retained the strong massing of the arena, while simultaneously transforming it with an intricate enclosure of 4,700 brushed aluminum fins. Each of the elements in this system varies slightly in profile and dimension to create a subtle flow that reflects the big skies of the flat Long Island landscape. The materiality of the design evokes the area’s history as well—a reference to the Spirit of St. Louis, a single-seat plane flown by Charles Lindbergh, which departed at a nearby airfield for the first non-stop solo transatlantic flight in 1927.

Gensler’s design vision for the interior of the 416,000 square-foot-arena reimagined the event experience for guests, performers, and athletes alike, while preserving the good “bones” of the building. Guest enhancements include a new exterior glass storefront to infuse natural light into the refreshed concourse, a redesigned main entrance, all new seating, improved bowl circulation, and revamped bathrooms and concessions. New amenity spaces for fans include an event level VIP Club and The Blue Moon Beer Garden. Behind the scenes, the venue’s Artist Quarters presented by Apollo Jets provides residential style living spaces for performers and talent management.

In addition to the design, the fan experience will also be enhanced with access to free high speed Wi-Fi, upgraded phone service for all major cellular carriers, and an enlarged high definition LED scoreboard.

Approximately 1,500 employees have been hired to work in the Coliseum, and have been trained by the Disney Institute, the business advisory arm of The Walt Disney Company, to bring industry-best customer service to the venue.

Through its Long Island Taste program, the Coliseum will offer authentic food and beverages from local restaurants and vendors. The program is modelled after Brooklyn Taste of Barclays Center, and overseen by Levy Restaurants.

The Coliseum will be home to the Brooklyn Nets’ NBA Development League affiliate, the Long Island Nets, and will also host a variety of events including concerts, family shows, sports and outdoor festivals.

Billy Joel’s grand opening performance will be followed by world-renowned performers such as Stevie Nicks (April 6), Marc Anthony (April 9), Barbara Streisand (May 4), Metallica (May 17), The Weeknd (June 3), and Bruno Mars (Oct. 5). Other major events include the final run of Ringling Bros. and Barnum & Bailey Circus (beginning May 12), Professional Bull Riding (Sept. 23-24), and a wide-range of other shows and events. For a full listing of upcoming shows, visit: www.NYCBLIVE.com

My administration is proud to have partnered with Nassau Events Center to jumpstart previous efforts to transform the Nassau Veterans Memorial Coliseum into a world-class venue. Together, we delivered a modern venue – at no cost to taxpayers – that makes all Long Islanders proud. From star-studded headliners to sporting events and the availability of local food options from some of your favourite local restaurants, the new Nassau Veterans Memorial Coliseum Presented By New York Community Bank is sure to impress and will return a minimum US$4.4m to taxpayers every year.

Our goal was to create a space that reflected the tremendous sense of place that permeates Long Island, from the look of the building, to the taste of the food. Our talented architectural and development team have succeeded beyond our dreams, creating a venue that is visually striking and wonderfully comfortable. We’re excited about the opening and are looking forward to the ongoing development of this entertainment destination.

NYCB LIVE’s Nassau Veterans Memorial Coliseum is defined by its modernized finishes, great programming, delicious local food, and first-class customer experience. This venue is more than just an arena, it is a place where everything is happening and everyone is welcome. To all of our guests, both old and new, welcome home.

I am beyond proud to say we have collectively succeeded in delivering to Long Island the venue it has long deserved. We have replicated the best aspects of Barclays Center, like its renowned customer service and culinary program, and infused it with the spirit of Long Island. The combination has yielded a premier venue with a first-class experience that will become a vital part of the fabric of the community.

We believe that NYCB Live, home of the Nassau Veterans Memorial Coliseum, will not only become a regional destination, but also serve as a place of pride for all Long Islanders. Our marquee partnership with this extraordinary venue will make Long Island an even greater place to live, work and play, while preserving the worthy recognition of those who served our country and made the ultimate sacrifice.

A formal dedication of the venue’s new memorial will be held on April 8 to honour those who have served their country from Long Island and beyond. Veterans from all branches of the armed forces will attend the event. The memorial, a dark granite oval on the southeast corner of the plaza, features water flowing along its surface, with a monument emerging at the centre where National Grid will honour the veterans with an eternal flame.

Frank Colon, a veteran of the United States Army, said:

Forty-five years ago, this building was named for and dedicated to American veterans. On behalf of those who have answered the call of their country, we thank you for rededicating the new Coliseum to those brave men and women who served. With this new arena, we will never forget them and we thank you for honoring their devotion and their sacrifice.

Opening the newly renovated Nassau Veterans Memorial Coliseum Presented By New York Community Bank is truly an important moment in the history of America’s largest township. The revitalized Coliseum is the first step toward transforming this vital property in the heart of the Town of Hempstead into a world-class entertainment destination and an economic engine, which will benefit residents for generations to come.

The US$165m transformation has given the 1970s-era structure a modern exterior featuring 4,700 brushed aluminum fins, as well as a new grand main entrance, an extended outer concourse, a 4,100-square-foot VIP Club, a 1,500-square-foot beer garden and improved seating.

SHoP Architects designed the new façade, while Gensler served as architect for the interior renovations.

The Coliseum will serve as the centrepiece of a 77-acre entertainment and retail hub known as NYCB Live. It can accommodate up to 13,000 fans for hockey games, 13,500 for basketball events and up to 14,500 for concerts.

The new Coliseum will welcome back former tenants New York Islanders, who will play six hockey games at the venue next season, and serve as home to the Long Island Nets, the Brooklyn Nets basketball’s development league team. 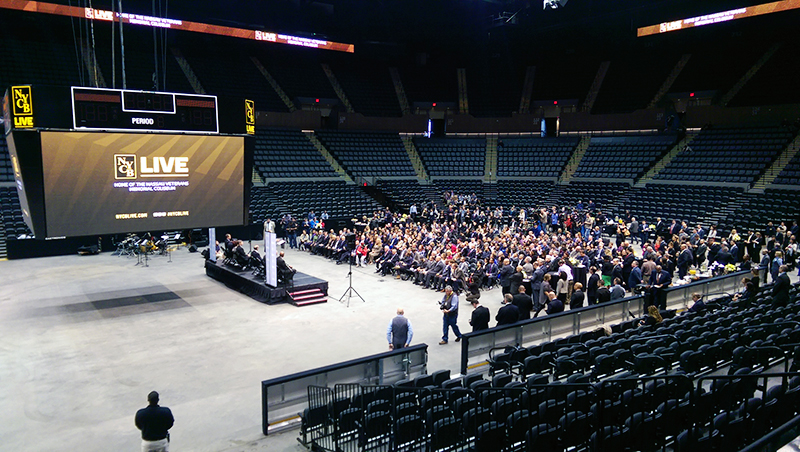