While Hungary opened three new stadiums in 2014, stadium construction in the country received another big boost this year, with 20 major projects lined up for commencement – all of which remain on track despite the country’s capital backing out of the race to host the 2024 Summer Olympic and Paralympic Games – the government having confirmed its plans to spend 67.144 billion forints (US$250m) on the projects.

Although the Hungarian capital, Budapest, withdrew its candidacy bid to host the 2024 Olympics earlier this year, this latest statement from the Hungarian government confirms that stadium projects including the New National Stadium will go ahead as planned. 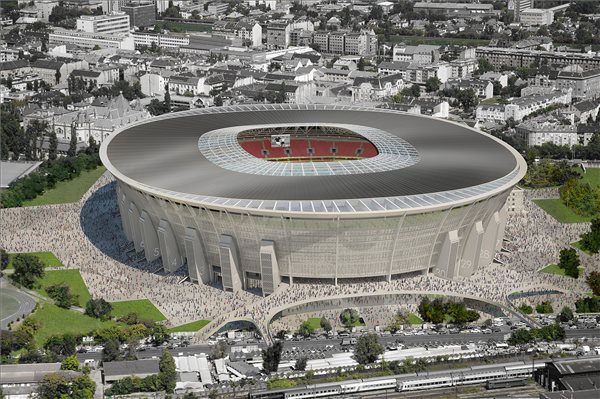 More insights on these stadium projects will be presented at Coliseum Summit EUROPE, taking place at Budapest’s Groupama Arena next week, March 29-30. Balázs Furjes, Government Commissioner for Major Budapest Developments, is among the distinguished speakers at the conference. He will offer details about the future sports venues plans and developments in Hungary. (NB: Sports Venue Business CEO, Katie McIntyre, will be reporting back from the Coliseum Summit, detailing all pertinent venue developments and other news.)

The Hungarian government’s plan follows its promises from a couple of years back. It is also in sync with the national program of sports infrastructure upgrade. The scheme aims at significantly improving or completely rebuilding all of the country’s top two league stadiums.

The first results of this project were witnessed in 2014, as three new stadiums were opened in Budapest, Debrecen and Felcsut. The first two were built in nearly record time and at a very efficient cost, while the third is Hungary’s new National Stadium for youth teams.

This year, the governmental program will include 20 stadiums across the country, the annual budget for which has been set at 67.144 billion forints (US$250m).

The current wave of stadium reconstructions started under the second prime ministership of Orbán Viktor, as reported by the Daily News Hungary. According to the newspaper, what really boosted the process was the possibility to support public benefit organisations (such as sport clubs) with the corporate income tax.

* Sports Venue Business is proud to be an Official Media Partner for all Coliseum Summit events in 2017, with our CEO, Katie McIntyre, plus our cameraman/videographer, to be in attendance at next week’s Europe event being held at the beautiful Groupama Arena, March 29-30. If you will be in attendance and have a story to tell, a project to share or wish to provide expert opinion on the latest trends or best practices, please contact Katie McIntyre via email at: katie@sportsvenuebusiness.com or Tel: +44 (0)797 0712538 to arrange a meeting. *

The table below shows how the money is to be distributed among participating cities of league one (NB I) and two (NB II):