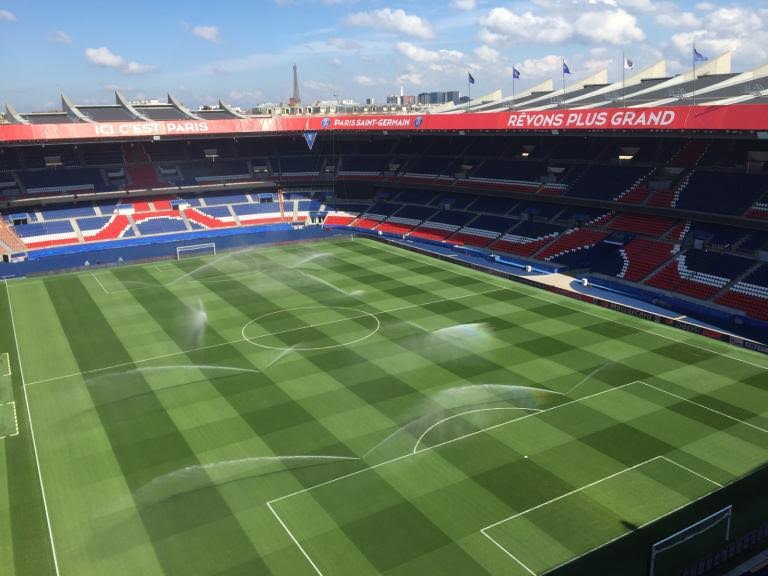 Katie McIntyre caught up with Jonathan Calderwood, Grounds Manager for Paris Saint-Germain (PSG) on Friday, just hours before the footballing behemoth took on Nancy in a 1-0 win on the perfectly primed and pristine turf at the iconic Parc des Princes; and before last night’s shock defeat against Barcelona at the Nou Camp.

Firstly, Jonathan, can you start off by telling us about you and your journey so far?

I’ve spent the last 22 years honing my skills; I studied hard and worked hard to get to where I am today. I left Northern Ireland for England at just 17-years of age to study ‘Turf Science & Sports Ground Management’ at Myerscough College for 3-years, before going to work as Deputy Head Groundsman at the original Wembley Stadium in 1997, where I assisted the Head Groundsman in the maintenance of the world-famous hallowed turf with a team of four groundsmen. I also oversaw the final ‘end of an era’ games at Wembley, before the stadium was demolished.

In 2001, I moved to Wolverhampton Wanderers FC, where I was responsible for the playing surfaces at the Molineux Stadium and Compton Park training ground. Then in 2002 I became Grounds Manager for Aston Villa FC, where I was responsible for all of the playing surfaces, including Villa Park and the Bodymoor Heath training ground. In total, that meant managing 14 natural grass pitches and four 3G synthetic pitches. I was also in charge of a team of 12 full-time and 5 part-time groundsmen. I was in a senior management at the club and as such had full control of the department and budgets.

In 2013, when the Qatari’s took over Paris Saint-Germain (PSG) and it became one of the richest club’s in Europe, the new owners started looking for a ‘Grounds Manager’ – which is something outside of the ‘norm’ in France, where most clubs have either the city or contractors managing and maintaining their pitches – to ensure their aspiration of having the best pitch not only in Ligue 1 but in Europe, which led to me being headhunted by the club and taking on the mantle of Grounds Manager; making me the first in France. It was a huge gamble and life change not only for me, but also for my wife and children, but I’m very happy now with my decision and so glad I made the move. 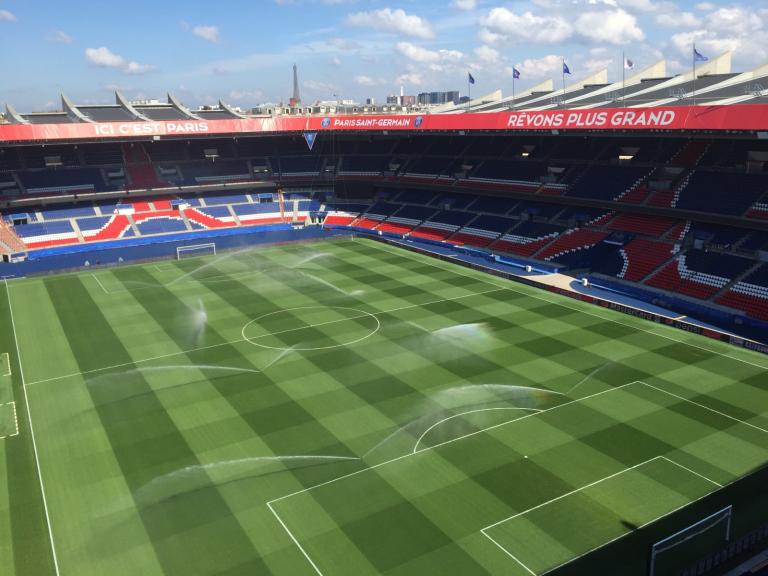 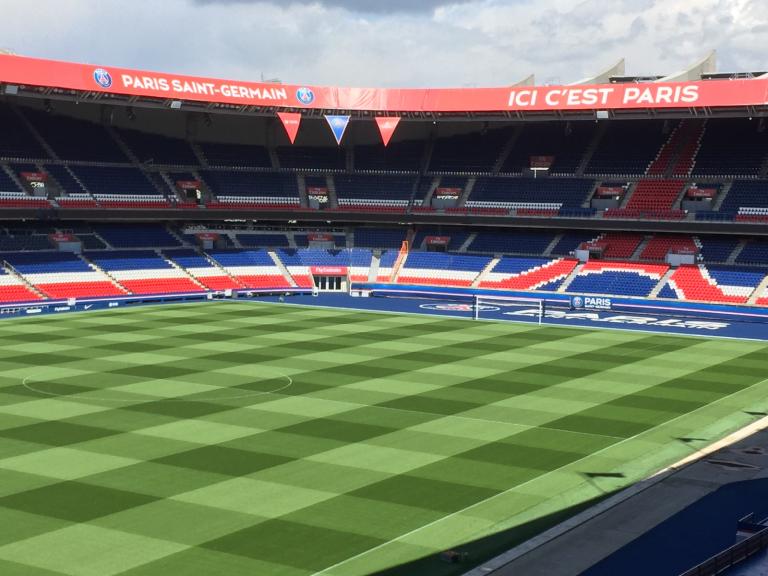 As Grounds Manager for PSG – one of the biggest clubs in Europe – you are responsible for keeping not only the hallowed turf at the new-look Parc des Princes in pristine condition but also the Academy and First Team Training pitches. What types of challenges do you face in this quest and how do you overcome them?

In England, Groundsmen are agronomists, who know all about and more importantly understand the science behind keeping grass plants healthy and in peak condition; we run the gamut, from soil testing, through to fertilising programmes and managing multi-million pound budgets. Whereas the original role of the groundsman and his team was to deliver pitches that ‘looked good’, the modern game, with its hi-tech, multi-million-pound players demand specific pitch types that deliver the best playability for the way the players’ want to play the game and all with the risk of potential injury diminished. The pressure is on to deliver good-looking pitches that are not only camera-ready for the broadcasters but that also deliver on the players’ requirements in terms of performance, presentation and diminished risks of injury.

All the tech I work with at PSG is that which I’ve used for the last 16 years, from the Desso GrassMaster pitch that I first used at Aston Villa, to the grass seeds, fertiliser programmes, lighting rigs and machinery. We have had great success with Desso, with Parc des Princes having won the ‘Best Pitch in France’ award for the last three years running.

The main challenge in France is dealing with the hot summers, where temperatures can reach in excess of 45°C. Rye grass is a cool season grass, so does not like these kinds of high temperatures. In fact, many clubs in France re-turf at the end of each season, whereas at PSG, we renovate the pitch and re-seed. This means we are having to look at things like cooling technologies to deal with the challenge of extreme heat, which puts tremendous stress on the grass plants, and can leave them open to deadly diseases. As well as cooling technologies, we’re also looking at ventilation and different grass types to overcome this challenge.

Can you tell us more about your responsibilities at PSG?

In June, I will have worked at PSG for 4 years. When I first came on board as Grounds Manager, I was responsible for the pitch at Parc des Princes and the First Team’s training pitch, then I took on the Academy training ground. In addition, on the back of the club doing their annual US Tour – during which they rent a university campus for 2 weeks of pre-season training – I now spend March to July travelling over and back to the US, as we renovate the pitch in March ready for the team to play on in July, so every 4-5 weeks I’m over there, ensuring that the pitch is up to PSG’s high standards. I’m in charge of finding the contractors, sourcing the grass seeds, fertiliser programmes, etc., getting the university to approve the works, and then keeping everything on track. 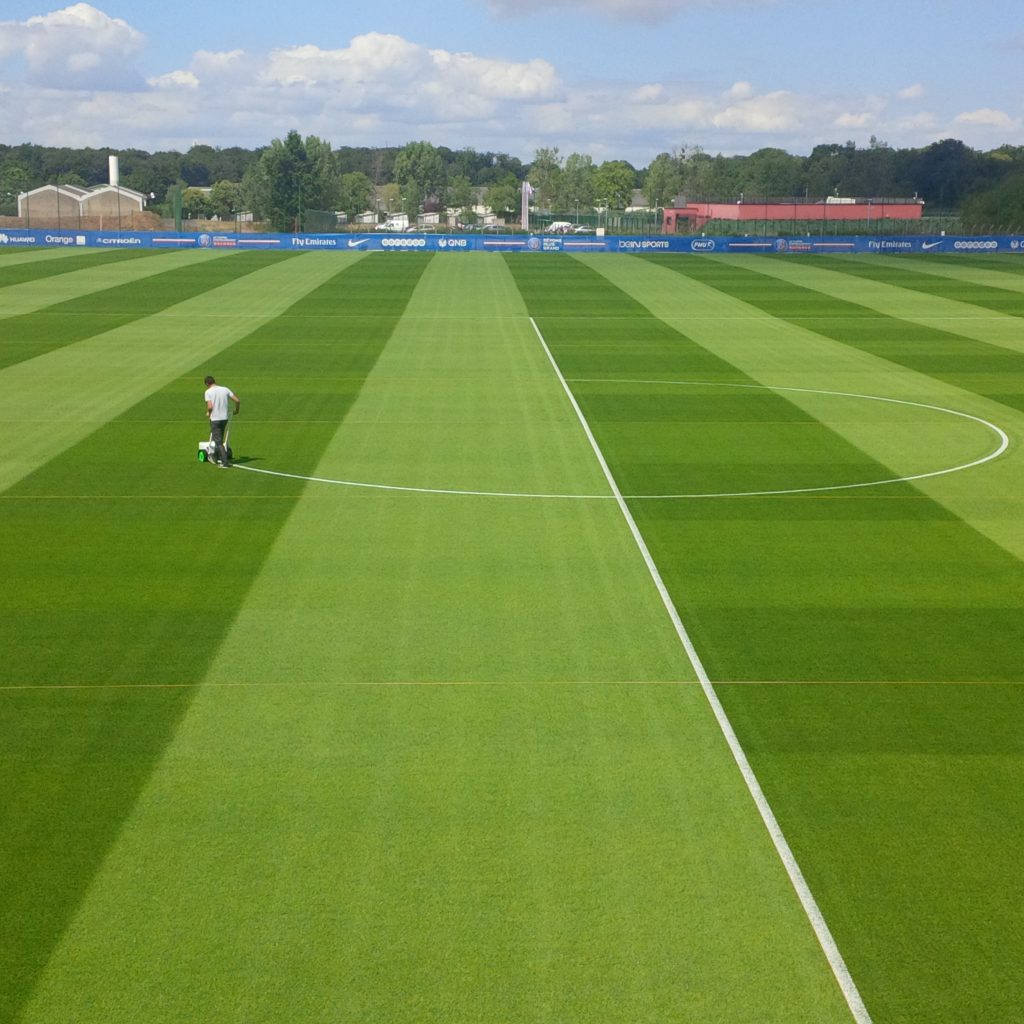 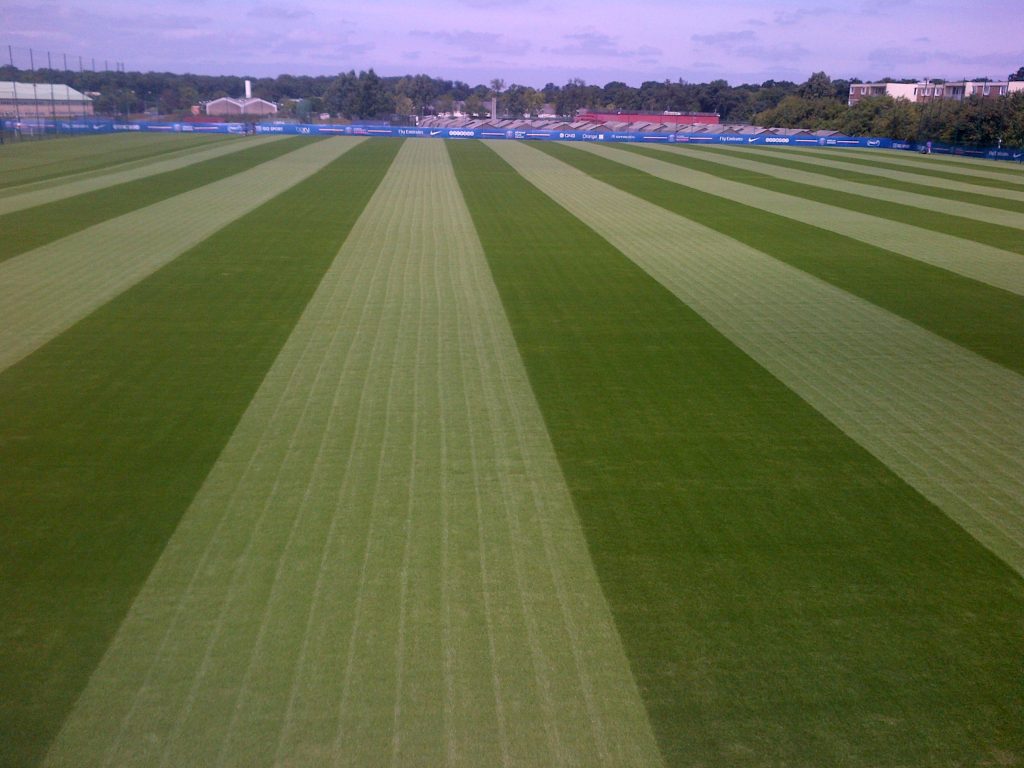 PSG has plans in motion to build a new multi-million-euro training ground and complex at a newly-purchased site in Poissy, west of Paris, that means your area of responsibility is about to increase again. What will this mean for you and your team?

Yes, we are currently developing plans for a new, world-class training complex, so that will mean myself and my team will have under our remit approximately 16 new pitches, plus potentially keeping our two existing training centres.

At the moment, I have 10 grounds staff at the two training grounds and two at the Parc des Princes, so I will certainly need to ‘grow’ employee numbers once the new training complex is up and running; hopefully in 2020.

I work alongside the two grounds staff at Parc des Princes for the practical work, whilst managing the two training centres, i.e. the Academy and First Team training ground. 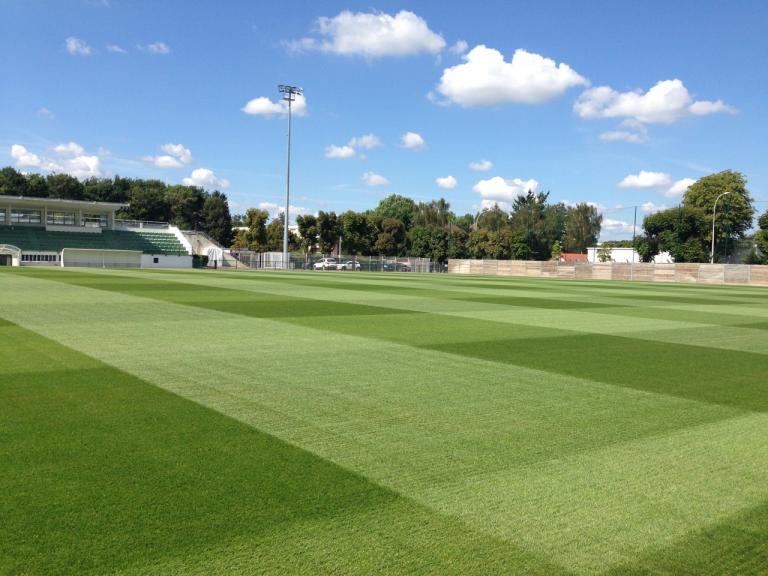 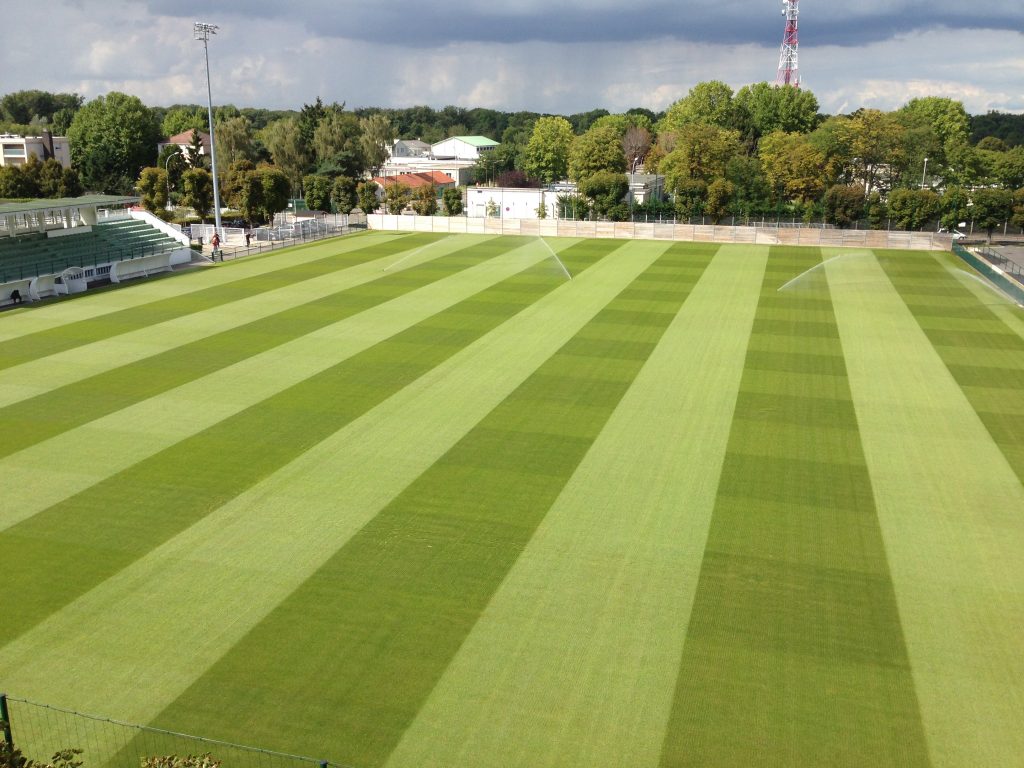 As the first Grounds Manager in France, has your job been made easier or more difficult?

The cultural and language differences have certainly been a challenge. Because most French stadia are municipality-owned, rather than owned by the clubs themselves, the pitches are normally maintained by the city, who use contractors and grounds staff have generally been viewed as purely as ‘gardeners’. However, with PSG having only recently completed a multi-million-pound redevelopment of Parc des Princes, they were willing to spend money on the pitch and get it up to international standard, and had the desire to ultimately get a pitch that was one of the best in Europe, if not in the world!

As the EPL’s pitches are renowned as being the best in the world, the Qatari’s wanted to follow the English model. And what we’ve delivered at Parc des Princes certainly delivers on these aspirations. It’s been both exciting and a challenge but the end result makes all the hard work worthwhile, especially with all the award wins, and the way the fans and the media have reacted is really top drawer! [Jonathan is known as ‘L’Anglais Jardiniere’ / ‘The English Gardener’ and is regularly on French TV and in magazines, and even fronted a television advert.] In my first season with PSG, working with the Academy, we secured the title of the ‘Best Pitch’ for the Champions League Youth League.

UEFA EURO ’16 was the catalyst that demanded pitch standards were put at the forefront and my arrival in France has also changed people’s perceptions as to what a Grounds Manager actually does, and made them see how important having the best possible pitch is. Other French teams are now realising that they have to ‘up their game’, with new pitches, lighting rigs, better budgets, and there is definitely a new found respect for the job people like me and our grounds staff do.

With associations like ESSMA – where I head up the Head Grounds Manager’s expert group – championing Pitch Management and with all the CV’s I’m receiving from young people expressing their aspirations to follow in my footsteps, I feel confident that other French clubs’ pitches will soon be battling it out with us not only in terms of players on the pitch but also in terms of the standard of their pitches. 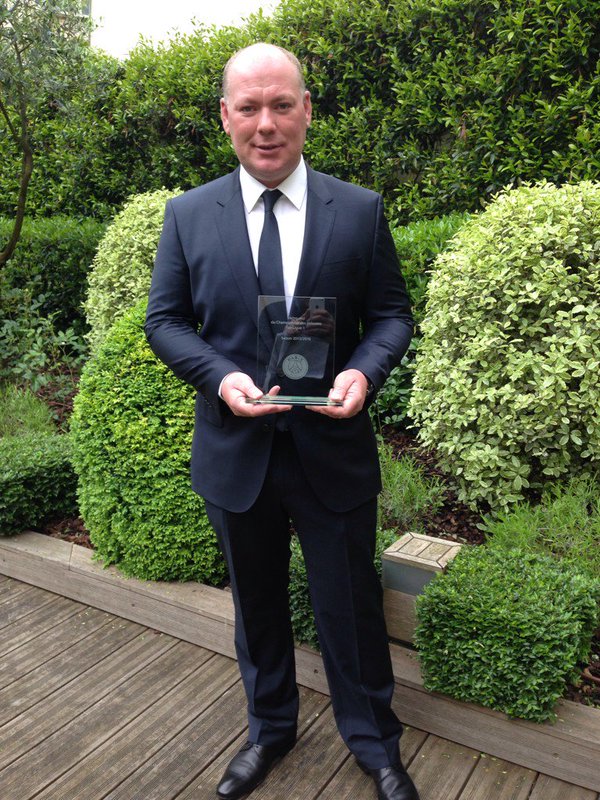 Employed as Grounds Manager at Paris Saint-Germain Football Club, Jonathan is responsible for the playing surfaces at the Parc des Princes and Camp des Loges, Paris Saint-Germain 1st team and Academy training ground.
His Groundsman career started out at Glentoran Football Club in Belfast, Northern Ireland. Then he attended Myrescough College in England gaining a Higher National Diploma (HND) in Turf Science, before becoming Deputy Head Groundsman at the old Wembley Stadium. While at Wembley, Jonathan worked on behalf of the English FA at the England training camps at the FIFA World Cup in France 1998 and the European Championships in Belgium in 2000. He was then employed by Sportsturf Maintenance Ltd in 2001, as Head Groundsman of Wolverhampton Wanderers and then also Head Groundsman at Aston Villa in 2002. In 2003, whilst in charge of both clubs, he became the 1st Division Groundsman of the year at Wolverhampton Wanderers. In 2006, Jonathan left Sportsturf Maintenance and became Grounds Manager of Aston Villa, with the reconstruction of the new Aston Villa training ground at Bodymoor Heath and the rebuild of the new pitch at Villa Park. In 2009, he was voted IOG Groundsmans of the year and then, in 2010, was awarded the Premiership Groundsman of the year. In 2011, Jonathan became Chairman of the Head Grounds Managers Expert Group for the European Stadium & Safety Management Association (ESSMA) and was also elected as an ESSMA board member. In 2012, Jonathan was awarded the IOG Professional Football Groundsman of the Year award, and then, in 2013, he was headhunted by Paris Saint-Germain to become their Head Grounds Manager.
In the 2013/14, 2014/15 and 2015/16 seasons, Jonathan was awarded Pitch of the Year in Ligue 1 by the LFP. Also in the 2015/16 season, PSG were awarded the ‘Best Pitch Quality’ award by UEFA for the UEFA Youth League for the Academy match pitch.

The European Stadium & Safety Management Association (ESSMA) will assemble for the Pitch Management Workshop taking place at the King Power Stadium in Leicester, England, from May 10 to 11, 2017. Delegates will enjoy panel discussions, pitch visits and workshops, as well as in-depth presentations and a networking dinner.

For further details on the ESSMA Pitch Management Worskhop, go to: http://sportsvenuebusiness.com/index.php/2017/03/07/turf-talk-knowledge-sharing-networking-essma-pitch-management-workshop/