Luzhniki Stadium blossoms as it prepares for new chapter 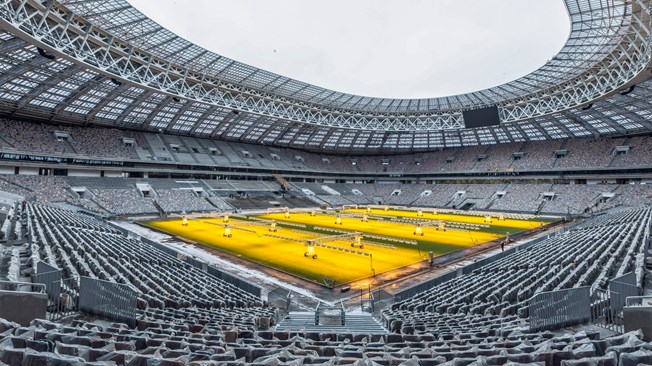 Luzhniki Stadium, the venue hosting the opening and final matches of the 2018 FIFA World Cup Russia™, looks all but ready for next year’s footballing extravaganza. One thing is certain, though: anyone who has visited the stadium before, will notice just how much the legendary venue, which enjoyed its 60th anniversary last year, has been enhanced. As the 2018 World Cup draws closer, the stadium begins a new lease of life.

The main construction work at the new Luzhniki Stadium is complete, virtually all of the seating has been installed, and the finishing touches are now being made to the venue’s interior.

The grass on the pitch*, sown in August 2016, has survived the harsh Moscow winter. Lit and heated by special grow lights, which provide an alternative to natural light, the system creates the necessary conditions for the pitch to grow and be maintained around the clock. Moving around on special wheels, the enormous structures are able to bathe virtually the entire pitch in light and warmth.

Luzhniki’s stands will soon come alive too. They’ve been brought as close as possible to the football pitch and modified, meaning their incline is lower-pitched, and crowd capacity has been raised from 78,000 to 81,000.

After reconstruction, the arena’s roof will be turned into a giant screen to broadcast the matches.

We will continue our improvement works in April. In the future, we will need to put up temporary structures around the complex that are needed to host the World Cup: media areas, fan zones, VIP zones and places to unload multimedia equipment.

Further improvements to the Luzhniki Olympic Complex are also planned. Much of the development, including on the embankment area, was completed last year. The remaining work will begin shortly.

*SIS Pitches installed the pitch for the 2018 World Cup Final, to be played at the Luzhniki Stadium in Moscow, Russia. This means that the 2018 World Cup will be the first ever to have a SISGrass natural turf reinforced pitch with SISAir technology. The SISGrass hybrid surface will make the Luzhniki Stadium the most technologically advanced pitch in World Cup Final history. The laser-guided installation took just eight days to complete and boasts 95% natural turf alongside the 5% specially designed PE yarn. SISGrass is an advanced reinforced turf system featuring patented installation technology, which offers increased pitch stability and delivers considerably longer playing hours than natural grass surfaces.

A feeling of anticipation and excitement filled the Saint Petersburg Stadium today as football legends, guests, children and the Russian mascot Zabivaka gathered in the magnificent arena to celebrate 100 days to go to the FIFA Confederations Cup.

As if the Opening Match between hosts Russia and Oceania champions New Zealand was about to start, the team kits of both teams were carefully arranged in the dressing rooms, kids walked on the pitch with flags, while the FIFA anthem was played, and Brazilian football icon and FIFA Confederations Cup winner, Cafu, brought the coveted trophy onto the pitch.

Cafu said at this week’s event:

This stadium is fantastic. It is a modern venue in a beautiful city hosting a very important tournament. I have great memories of the Confederations Cup. It is a very competitive and short competition, which I am proud to have won. And of course, it is a great way for teams and hosts to prepare for the World Cup.

Next to Cafu in Saint Petersburg were veterans of the Russian national team – goalkeeper Vyacheslav Malafeev, defender Dmitry Sennikov and midfielders Roman Shirokov, Evgeny Aldonin and Alexey Smertin. While fans cannot wait to fill the stadiums in Saint Petersburg, Moscow, Kazan and Sochi – especially those who have already guaranteed their tickets – the organisers are focused on the final stretch of the preparations.

Not only in 2018, but in 100 days, the eyes of the world of football will be set on Russia. It is a big responsibility but also a great opportunity. The best teams from each region of the world will be here. The current World Cup champions will be here. The defending best player in the world will also be here. Together with the LOC, the host cities and Russia, we are working hard and on the right track to deliver an unforgettable tournament for the locals and the whole world to enjoy.

We celebrate 100 days to the FIFA Confederations Cup in Saint Petersburg, the capital of the ‘Tournament of the champions’, in just a few months. Not only Saint Petersburg but also Moscow, Kazan and Sochi are practically ready for the tournament.

In his position as city governor, Georgy Poltavchenko spoke about how Saint Petersburg is preparing for the Tournament of Champions. The beautiful city by the Neva River will host not only the opening contest but also the final match, which will determine who takes home the trophy, which was displayed for the first time on the pitch of the Saint Petersburg Stadium.

Match tickets are currently on sale at FIFA.com/tickets.