Queensland’s live sport fans and concert goers will soon feel even closer to the on-field action, with Watpac today announced as the project contractor to deliver new screens at The Gabba and Suncorp Stadium.

Minister for Sport Mick de Brenni said more than A$7m would be invested into the project to deliver four new high definition LED screens to the venues.

It’s hard to beat a day of cricket at The Gabba, or a night at a concert at Suncorp Stadium, but these new screens will ensure an even better atmosphere at these iconic venues.

The screens will be installed by Watpac who are well-suited to the job with their local knowledge and stadium experience, having also constructed The Gabba, CBUS Super Stadium and Metricon Stadium, and were also part of the joint venture to redevelop Suncorp Stadium.

Investing in this infrastructure will allow sporting codes and event promoters more opportunities to interact with fans and also ensure Queensland continues to be able to attract the biggest and best sporting and entertainment events.

There is no sporting experience in the world that beats a packed out cauldron cheering Queensland teams on. These mammoth new screens will take things to the next level.

You can just imagine a pack house glued to the screen as it plays a slo-mo replay of Paul Gallen coughing up the ball. These are the moments that bring Queenslanders together.

Watpac Limited Construction QLD/NT State Manager, Drew Brockhurst, said the company was delighted to be delivering this project in its home state of Queensland. He added:

Watpac has been involved in building a number of Queensland’s iconic venues, and it is wonderful that we are playing a role in the evolution of this much-loved stadium. Installation of the new screens will begin in March, and we hope the new screens will provide fans with an even better experience.

The screens will be installed at Suncorp Stadium by the middle of the year. 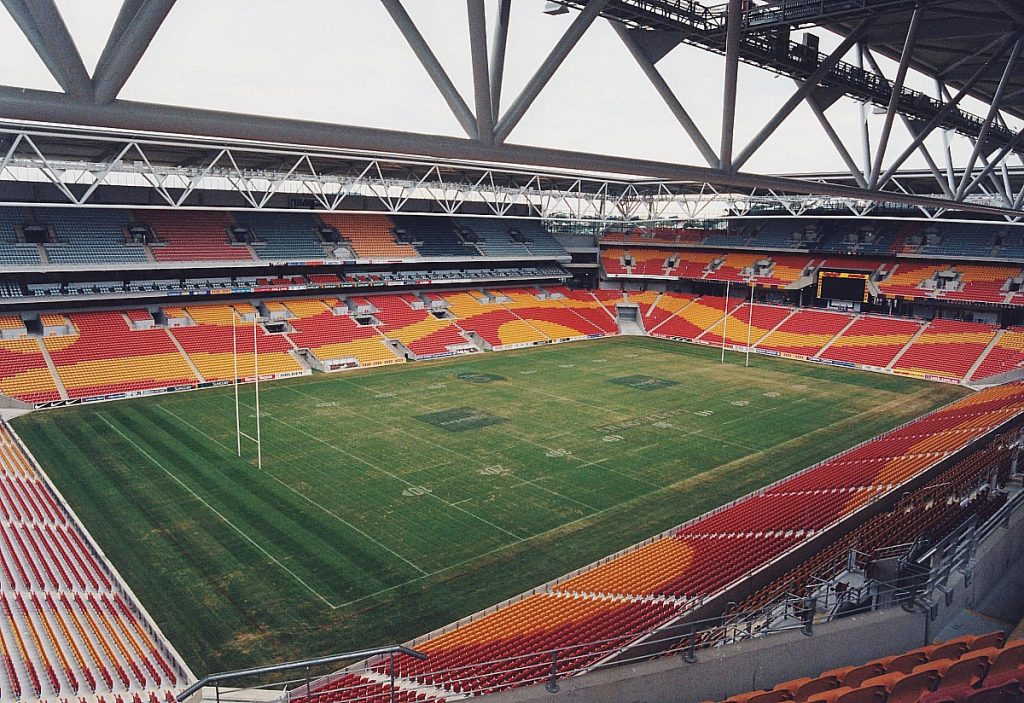 Toowoomba Sports Ground opens for an all-star year in 2017

With a A$400,000 Palaszczuk Government pitch redevelopment reaching the final siren, it’s game on for the 2017 football season at the Toowoomba Sports Ground.

Minister for Sport, Mick de Brenni, said Toowoomba Rugby League’s inaugural Indigenous All Stars fixture on February 25 would be the first of many major football events to be played out on the ground’s new field.

The Toowoomba Sports Ground is a key sporting precinct for this region with the upgrade building in a new level of flexibility to meet the needs of the community across three football codes. The $400,000 redevelopment includes a new, regional competition-standard turfed field with run-on and run-off areas to suit rugby league, rugby union and soccer. In addition to an upgraded irrigation system, pathways and landscaping, the Palaszczuk Government has also enhanced spectator viewing areas to give football fans the best seat in the house.

I can’t think of better way to kick-off the new field than with a pre-season clash featuring the best Indigenous football talent from Toowoomba and the South-West Region.

Aboriginal and Torres Strait Islander athletes are without a doubt among rugby league’s best and this weekend’s All Stars match-up celebrates the awe-inspiring contribution of Indigenous Australians to Queensland’s favourite code.

The All Stars fixture is a fantastic initiative of Toowoomba Rugby League to showcase the region’s talent and the completion of the Palaszczuk Government’s redevelopment of the Toowoomba Sports Ground’s field for the 2017 season.

Mr de Brenni said the Queensland government recognises sport and recreation at all levels brings communities together and helps to  inspire the next generation of champions.

This is another run on the board for the Palaszczuk Government’s commitment to developing and upgrading sporting and entertainment infrastructure for the benefit of communities across Queensland.

The Toowoomba Sports Ground redevelopment is funded by the Sport and Recreation Services Capital Works Program.

Clive Berghofer Stadium (officially known as Toowoomba Sports Ground and previously known as Athletic Oval) is a stadium in Toowoomba, Queensland, Australia. It was re-named to reflect the home club’s major sponsor, philanthropist property developer and former local Mayor Clive Berghofer. The stadium is the home ground of the National Premier Leagues’ Football Club, the South West Queensland Thunder, and also plays host to rugby league, rugby union and football (soccer), and features lights up to National Rugby League (NRL) standard. The recently upgraded grandstand includes undercover seating for 2,300. Toowoomba Sports Ground has the capacity to hold 9,000 people officially. In the past, the stadium has hosted international and national rugby league matches, as well as concerts.