The University of Missouri (MU) Department of Intercollegiate Athletics has received its ninth, seven-figure gift toward the new south end zone facility at Memorial Stadium/Faurot Field, which is scheduled to open ahead of the 2019 football season. An anonymous donor made a US$2m gift toward the project, which is currently being designed by the Kansas City-based architecture firm Populous, last Friday.

With the Board of Curators approving Populous as the facility’s architect and the continued generosity of our donors, there continues to be tremendous momentum for this facility which is so important to the long-term future of Mizzou Athletics, and in particular our football program. We are so grateful for the donors who continue to come forward with transformational gifts to help make this a reality for our student-athletes, staff and fans.

This gift marks the project’s ninth, seven-figure gift in the past eight months, which is a fiscal year record for Mizzou Athletics (the previous high was six such gifts). To date, more than US$46m has been secured in private donations for the new facility.

We’re really excited to continue the momentum from our donors, and coming on the heels of the Board’s action last week, this is great news. We are very grateful to the Board of Curators for their support of this project, and I’m looking forward to working with the Populous team as we design a facility that will be one of the best in the country.

Populous was approved last Thursday by the University of Missouri Board of Curators as the architect for the US$96.7m project, which is scheduled to be completed by 2019. Recognised as one of the nation’s premier sports architect firms, Kansas City-based Populous has completed major football projects since 2012 for Texas A&M, Oklahoma, Kansas State and Colorado, while designing the three newest on-campus FBS stadiums in Minnesota’s TCF Bank Stadium, Baylor’s McLane Stadium and Colorado State’s Sonny Lubick Field, which debuts in 2017.

The Mizzou project will include a four-storey football team facility in the south end zone at Memorial Stadium/Farout Field as well as new premium seating opportunities for Tiger football fans.

In addition to providing a new state-of-the-art home for Mizzou Football and creating new revenue streams for Mizzou Athletics through premium seating opportunities, the new facility will also have an impact on the Central Missouri economy, as a recent study conducted by Plano, Texas-based Convention, Sports and Leisure projects a US$700m regional impact from the project along with 1,200 new jobs. 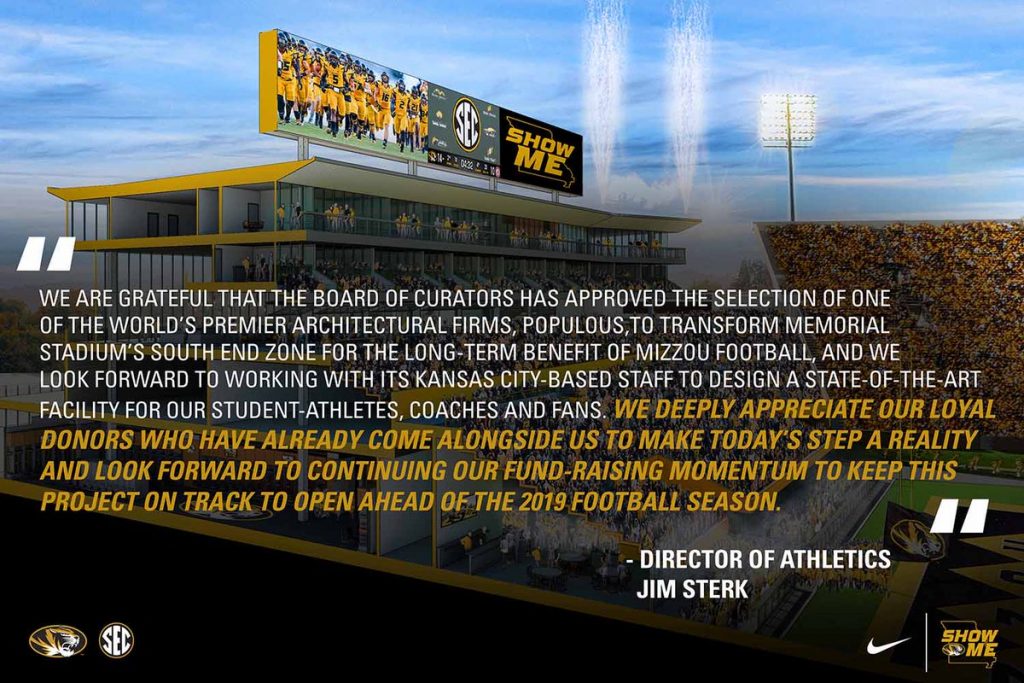 Memorial Stadium is the heart of the football program for fans and the team. Facility improvements have been made over the last 20 years to many areas of the stadium and field. The south end bowl of 10,800 general admission seats was constructed in 1977. It has not been measurably updated to improve the fan experience and is showing signs of deterioration and settlement consistent with a structure of this age. A change in seating mix to include premium seating and premium amenities and new general admission seating is projected to provide an increase in revenue.

MU’s ICA Master Planner and planning team recently completed a study to address the issues of creating a football focused team facility and eliminating an aging component of Memorial Stadium with the goal to improve the fan experience and revenues.

The Memorial Stadium South Expansion project will be evaluated for viability of pursuing USGBC LEED certification during the early phases of the design process.

Populous, Inc., of Kansas City, Missouri, has been chosen as the architectural consultant. Populous has an extensive portfolio of new and renovated football facilities, and stadiums on University campuses of similar scale and complexity, and with several notable projects where their firm provided the full range of architectural services. Populous’ experience and leadership in the design of collegiate football programs for enhanced performance, recruiting, and fan experience is supported by the staff identified for this project who are experienced and dedicated entirely to sports architecture. Populous’ similar project experience includes Architect of Record for the Bill Snyder Family Stadium North End Zone Expansion & Vanier Football Complex at Kansas State University in Manhattan, Kansas; phased renovation of Gaylord Family Memorial Stadium at University of Oklahoma, Norman Oklahoma; and Folsom Field Renovation & Champions Center, University of Colorado, Boulder Colorado.

The fee for basic architectural and engineering services has been determined by using the University of Missouri’s “Architectural and Engineering Basic Services Fee Estimating Guidelines” at 5.0% of the $66,000,000 construction cost or $3,300,000. Additional services for multiple bid packages, audio/visual & acoustical, security, specialty lighting, food service, environmental graphics, and steam utility engineering are anticipated at $1,010,000 for a total design fee of $4,310,000.

The project will be delivered as a Construction Manager at Risk (CMR) project. Construction completion is planned for summer 2019.