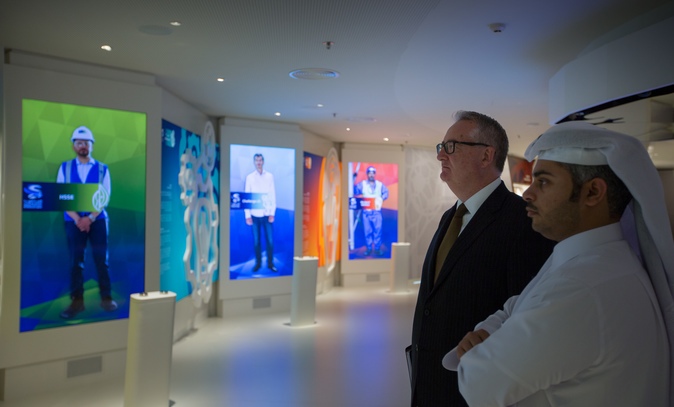 During a recent trip to Doha, Tim Morris, INTERPOL Executive Director for Police Services, spoke about how Qatar’s early planning and detailed preparations to host a safe and secure FIFA World Cup™ will set a precedent for future mega events.

In the country to discuss INTERPOL’s Project Stadia, Morris had an opportunity to learn about plans for the 2022 FIFA World Cup Qatar™.  He said afterwards:

Hosts look at what other hosts are doing and the smart ones learn from each other. We’re seeing more and more that preparations are undertaken early but I think so far Qatar has set the benchmark for preparing early for such a major tournament.

INTERPOL’s Project Stadia is allowing officials from both organisations to prepare for future challenges, but also to prepare a body of knowledge that leaves a legacy not only for Qatar and the region but globally on some of the lessons learned in terms of security and running such important global events.

Morris draws on a wealth of experience with the Australian Federal Police during a 30-year career, and emphasised the management of the knowledge gathered by Qatar during preparations, will be “vital” for future hosts of major tournaments.

While in Qatar, Morris met with the Secretary General of the Supreme Committee for Delivery & Legacy (SC), H.E. Hassan Al Thawadi, and security officials to discuss INTERPOL’s Project Stadia. The project supports Qatar in its preparations for the 2022 FIFA World Cup™, as well as other INTERPOL member countries preparing major public events. In April 2017, Project Stadia will host the first International Major Event Security Conference in Doha, involving key decision-makers, experts and practitioners from around the world.

Morris added that one of the big challenges in terms of security is trying to imagine what the world will look like in 2022:

We know what the security context is today, but in six years’ time it might be a different question and anticipating that and making provisions to be able to be flexible enough to address it in 2022 will certainly be one of the challenges. Seeing the preparations, I’m confident the processes are beginning to be put in place to enable the team here to address that challenge.

The visit to the Supreme Committee for Delivery & Legacy has helped me understand much more clearly the context of the whole project and not just the tournament. You can see how it’s an important catalyst for growth, development and ultimately, legacy.

Areas of discussion at INTERPOL’s General Secretariat headquarters focused on cooperation between both organisations on safeguarding major sports and other public events, best practices to mitigate potential threats, as well as safety and security training.

Enhancing major event security through INTERPOL’s global policing capabilities was also on the agenda during the visit, as was the Council of Europe’s Convention on an Integrated Safety, Security and Service Approach at Football Matches and other Sports Events.

The meeting was held under the auspices of INTERPOL’s Project Stadia, funded by Qatar, and which supports its Supreme Committee for Delivery & Legacy in its preparations for the 2022 FIFA World Cup, as well as other INTERPOL member countries preparing to host major events.

The project also seeks to create a centre of excellence with a repository of best practices to help INTERPOL member countries plan and implement security preparations for major sports events.

As part of Project Stadia’s efforts to develop partnerships with national and international institutions, the Council of Europe participates in the project’s annual expert group meetings on the key themes of legislation, physical security and cybersecurity.

Project Stadia represents INTERPOL at meetings of the Standing Committee of the European Convention on Spectator Violence, to which the world police body was granted observer status in January 2016.

In April of this year, Doha will host the 1st International Major Event Security Conference involving key decision-makers, experts and practitioners from around the world, under the aegis of Project Stadia.

For more information on INTERPOL’s Project Stadia, go to: https://www.interpol.int/INTERPOL-expertise/Stadia/Project-Stadia