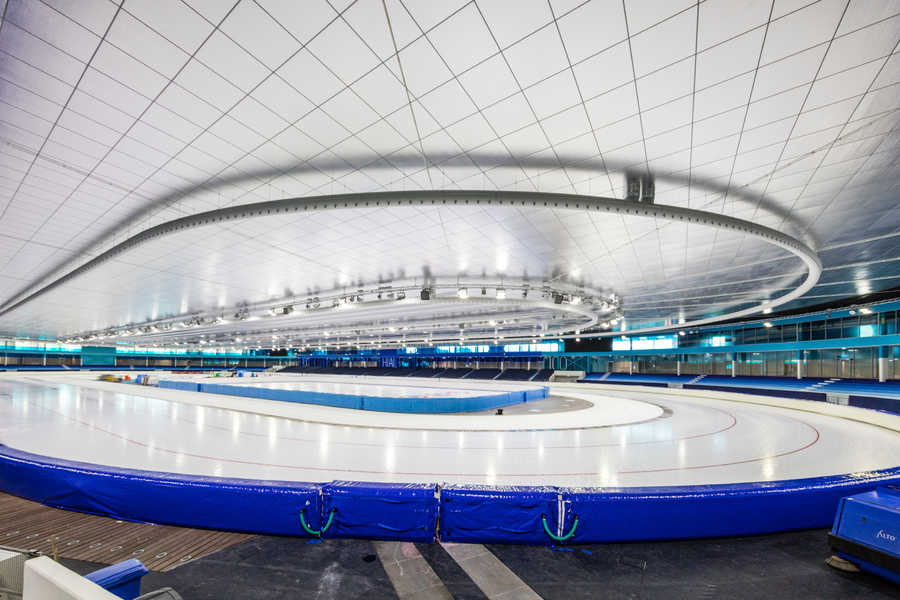 King Willem-Alexander welcomed the waiting media, dignitaries and fans to the highly-anticipated inauguration of the renewed Thialf Ice Arena on January 27, 2017. The event was marked with an official opening ceremony for the short track and marathon race competition.

In the renewed Thialf Ice Arena in Heerenveen, The Netherlands, everything is about the ice skaters and the ice experience. This vision led to a new ice skating stadium with a completely new design, by Amsterdam-based architectural practice, Zwarts & Jansma Architects (ZJA).

By positioning all the facilities around the ice, top-level sport has been given a central position, and maximum interaction between athletes and the public is stimulated. The promenade is separated from the competition area by a glass wall, with all areas overlooking the ice. The pattern on the façade of the newly transformed ice arena, inspired by ice crystals, provides a further contribution to this experience. Using blended white and blue colours, the transparent promenade surrounding the competition area further enhances the experience, and the countries top athletes now have access to the fastest ice and the best 400m lowland track.

All of the facilities in the new venue – from the tribunes, press areas, hospitality and food services, to the offices and top sports training facilities – are positioned around the ice. The promenade is separated from the competition area by a glass façade. By positioning all these functions around the ice, ZJA’s design stimulates maximum interaction between the top athletes, recreational athletes and the public. Furthermore, the architect’s philosophy “everything is all about the ice” leads to a compact design with a logical ordering of functions and an iconic appearance inside, as well as outside. 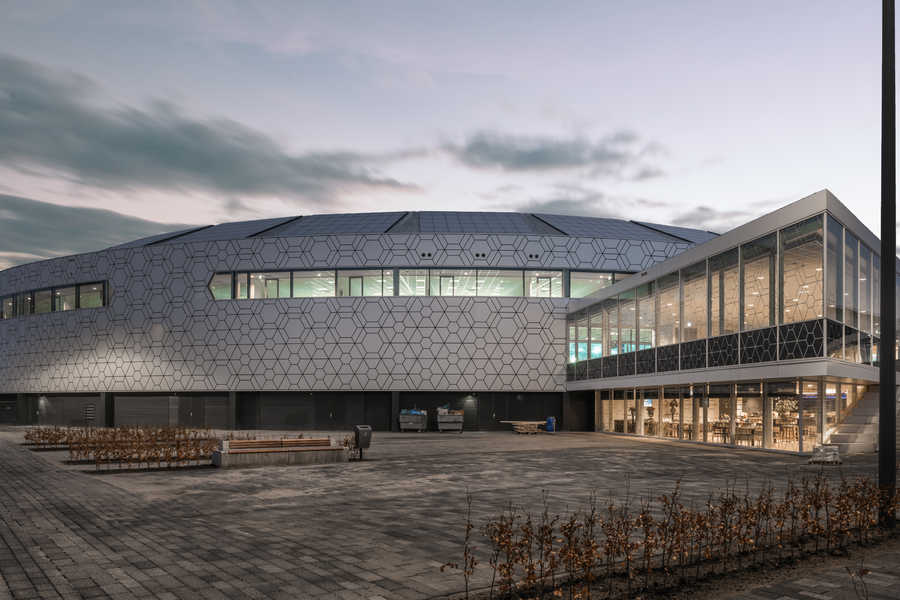 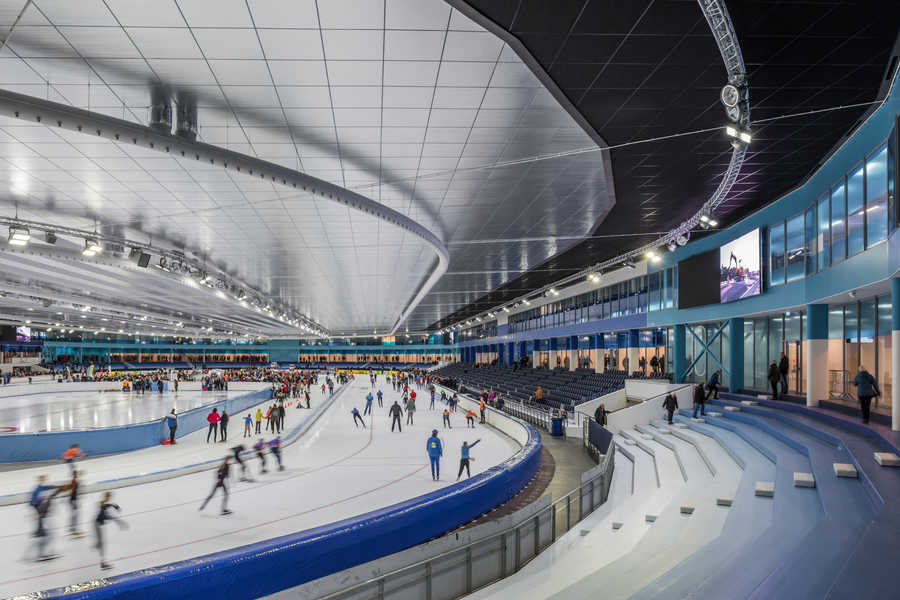 A 400m-long glass wall with transparent blue foils determines the experience in the new Thialf Ice Arena and also acts to separate the promenade from the competition area. All facilities in the transformed venue are now positioned around the ice

ZJA’s design is an extension of the oval structure of the existing building, with all functions and focuses on the ice; the promenade being the connecting element.

During events, visitors can easily access the stands via this promenade, along which serving points and public meeting places are located. The underlying groups of toilets can also be easily accessed via the promenade.

A 400m-long glass wall with transparent blue foils not only determines the experience in the new Thialf but also separates the promenade from the competition area. And with all facilities now positioned around the ice, interaction between the athletes and the audience is stimulated.

The promenade isolates the unpredictable outside weather from the competition area and allows for better control of the indoor climate. In the renewed Thialf, moist air, brought in by wet coats, is dispersed outside. This creates climate segregation by an air curtain between the public and the competition area. Thialf has different climate areas within the ice rink, stand and the promenade that can be managed separately. These new climate areas are one of the key new enhancements of the new-look venue.

The renewed Thialf Ice Arena has been completely renovated and made sustainable. As such, ice is made using solar energy, and the new roof – which boasts more than 5,000 solar panels, making it the largest ‘sunroof’ on a stadium in The Netherlands – is enabling the venue to fulfil most its own energy needs.

In the original building, the warmth of the freezing machine was not re-purposed and re-used, simply lost into the ether. However, in the new Thialf, this energy is being used to warm-up the entire building. In addition, by making use of an underground heat and cold storage in a layer of sand, a large amount of energy is being saved. Furthermore, the stadium makes use of energy efficient lights that produce little heat, is extremely well insulated, and looking forward, intends to fully provide for its own energy needs.

For the design of the new Thialf Ice Arena, commissioned by Heddes Bouw & Ontwikkeling, ZJA worked in close cooperation with the construction consortium consisting of Heddes Bouw & Ontwikkeling, Croonwolter&dros, Warmtebouw and Day Creative Business Partners.
The venue has two main operations: 1) for use during during events and 2) for daily use. In both situations, visitors to the new Thialf receive an appropriate welcome. During events, spectators in the public zones are separated from the guests in the hospitality zones in a natural way; with spectators for the public zones ascend stairs to the first floor, while guests for the hospitality zone enter Thialf through the entrance on the ground floor. On the one hand, this split prevents large flows of visitors from intersecting. On the other, the size and scale of the entrance hall also remains, with peaks, pleasant and well managed during daily use.

The promenade is the functionally connecting element of the building, both during events and during daily use. It is accessible for all visitor flows. During events, all the tribunes are accessible via this promenade. Dispensing points and meeting places for the public zone are located on the promenade, and the underlying groups of toilets can also be easily accessed via the promenade. 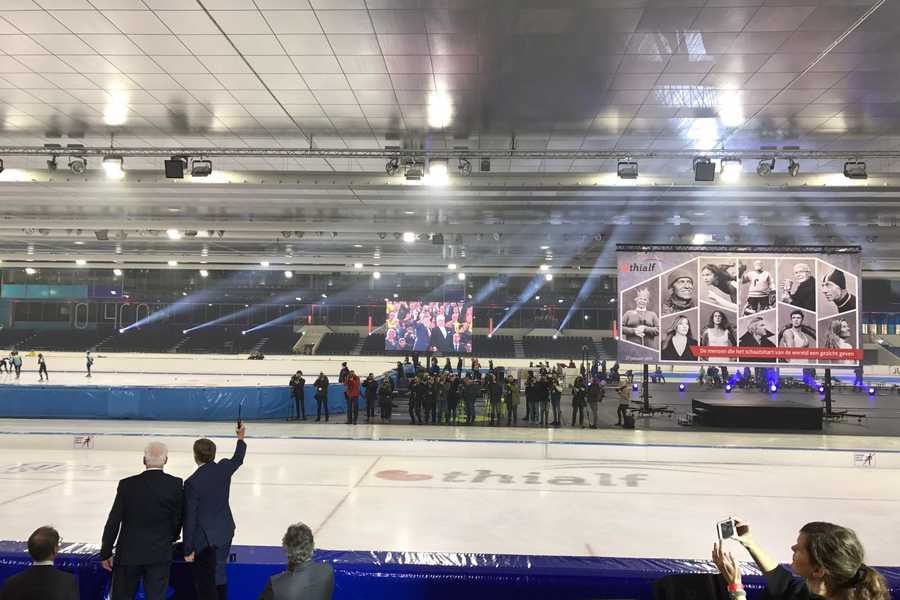 King Willem Alexander opened the new-look Thialf Ice Arena, which documents the venue’s long-running history with the sport of skating through a series of large-scale images

The latest ‘heroes of the ice’ can be viewed and experienced from inside the promenade and the rich history of Thialf is featured on the outside of the promenade. Thialf has been connected to the sport of skating since the establishment of ‘Koninklijke Thialf’ in February 1855. Great championships have been skated here and this rich history all contributes to the Thialf experience, not in a closed museum section, but rather through space-filling historical images; with images of Thialf during the 1917 Frisian championship, images from 1946 with Piet Keyzer, Gerard Maarse on the open air rink in Heerenveen in 1955, Ard Schenk, Dag Fornaess and Cees Verkerk in 1969, and the wrong exchange of Jan Bols (1971). Of course, the first roofed championship is also beautifully documented in “Thialf ’t dak eraf” (The roof of Thialf). With this open skating museum on the promenade, the original venue’s history contributes to the experience of skating in the New Thialf.
Skating at top level consists of two elements: purity and dynamics. The strengths of the skater only come into their own when they are executed in the most pure movement. The position of the skate on the ice, the mark, the slide, each skater looks for the line that provides their dynamics with the ideal result: maximum speed. These two elements form the inspiration for JZA’s design. They appear in the functional design where the groundbreaking ice experience is the focus, in the logistics by separating public streams at the entrance and the expansion of the tunnel for the professionals, as well as in the setup of facilities that support world-class performances and where the top sport training facilities and the lab take a prominent position (inspiring each other through interactions and viewing relationships).

The elements of purity and dynamics are visible even on the outside of Thialf in the main area of the building. The dynamics of entering are expressed in the design of the entrance, together with the landscape of stairs. Two “arms” of glass extend themselves outside in order to welcome the stream of visitors. The purity of the ice rink is reinforced by the perfect white and continuous shape of the competitive arena. The experience of purity and dynamics is experienced further through the pattern, inspired by ice crystals, on the façade of the skating rink.
A spokesperson for JZA, said:

Everything that we renovate at Thialf is future-proof. That requires an integral architectural and installation technical approach. We choose for a setup where the components reinforce each other maximally: a building that optimally facilitates the skating experience, a central installation concept, smart architectural and installation technical zoning with “everything all about the ice”, modular setup, a sustainable and (largely) self-sufficient energy concept and a building with the necessary flexibility.

Installation (sub-)systems and areas can be relocated, expanded, added and/or replaced quickly and easily. The multifunctional second floor to be used is a good example of this. A single function building where everything revolves around the ice, but can be used for multiple functions. This is how a New Thialf of an unprecedented level has been realised: an ice arena of lasting quality.