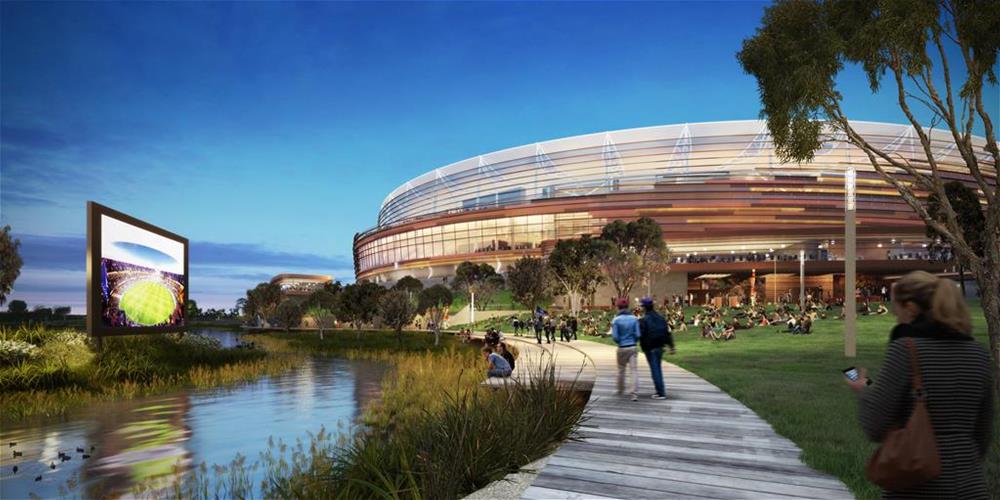 The Premier of the Government of Western Australia, Colin Barnett, has announced that the new Perth Stadium will be illuminated through the biggest sports lighting system in the world, which will include some 15,000 LED lights.

This lighting system is another world-class design feature, allowing visually stunning light shows to be created inside and outside of the stadium.

Perth Stadium will truly change the spectator experience and every design decision has always had the fans and their experience at the core.  This lighting system will interact with the fabric roof lighting system, allowing the roof to act as a giant canvas, capable of showcasing a variety of colours in numerous configurations such as purple for Dockers games and blue and gold for Eagles home games.

The lighting system is being designed and supplied by global lighting company Philips Lighting. Once installed, it will be the biggest LED sports lighting installation of its kind in the world, providing a lighting solution that is adaptable to specific requirements of sporting codes and other events.

Sport and Recreation Minister Mia Davies said stadium construction was progressing well and remained on track for completion ahead of the 2018 AFL season.

We are currently just over 70 per cent complete and by the end of the year, the stadium structure and its surrounding parkland precinct will be complete and an extensive testing and commission phase will be undertaken.

It will not be long before 60,000 fans are here cheering on their favourite sport and entertainment acts.

The construction focus is currently on the internal fit-out and the site workforce is more than 800. Nearly 80 per cent, or more than A$450m worth of stadium subcontracts awarded to date have been to WA companies, which is having positive flow-on effects to our local economy.

The unique aluminium facade is nearing completion and 40 per cent of the 60,000 seats are in place. 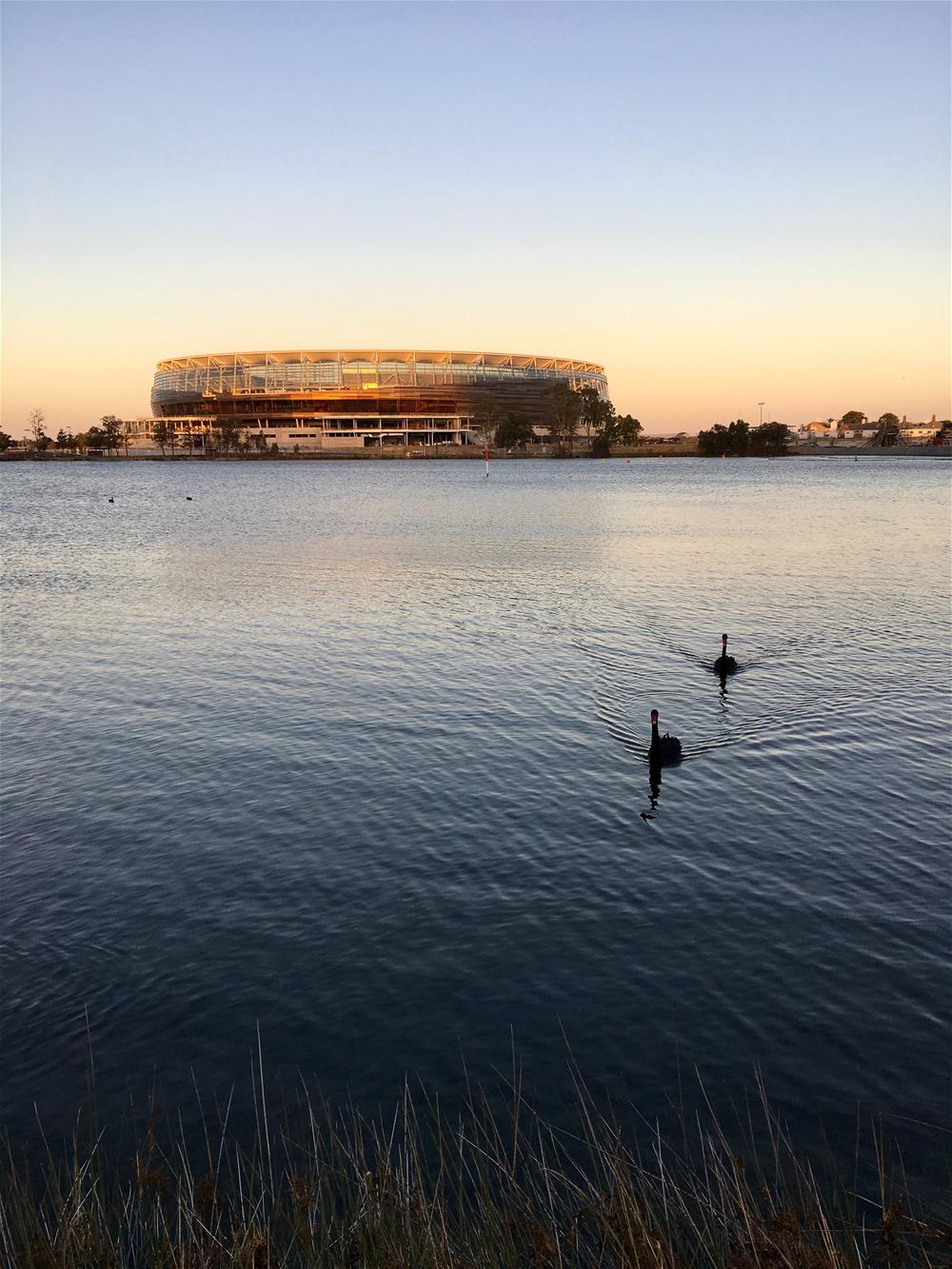 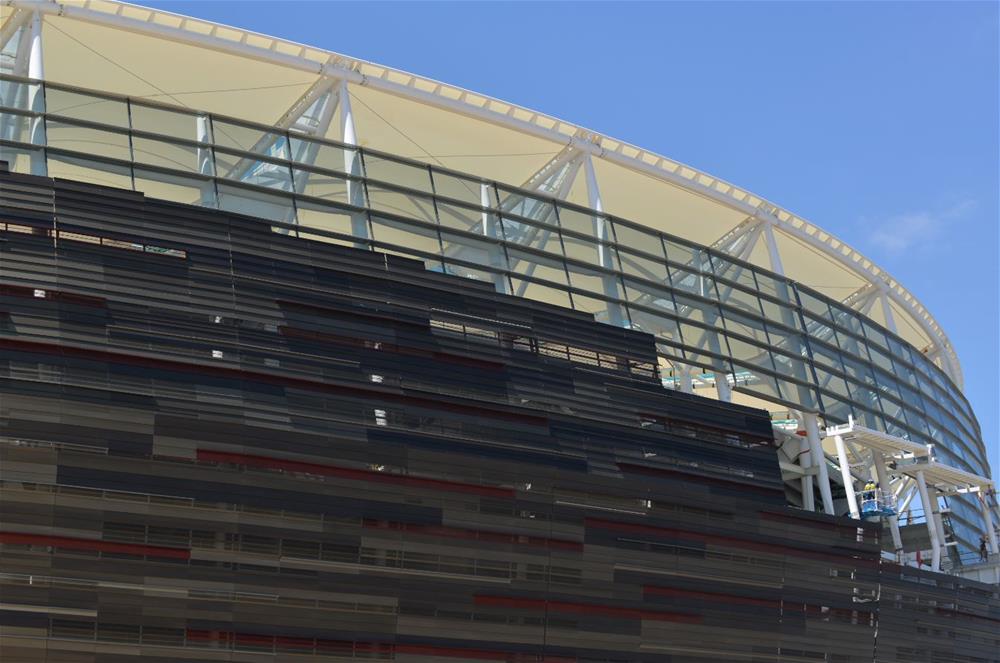 The lighting system was procured by Westadium which is responsible for the design, build, partial finance and maintenance elements of the Perth Stadium and Sports Precinct.

Perth Stadium will be a 60,000-seat (with the potential to increase to 70,000), multi-purpose venue capable of hosting AFL, rugby union and league, football (soccer), cricket and entertainment events.

With a ‘fans first’ approach to planning and design, the venue will offer an unrivalled spectator experience including exceptional event atmosphere and cutting-edge stadium technology.

The stadium will be integrated within a broader Sports Precinct, providing opportunities for the development of cafes, alfresco dining, playgrounds, community spaces and other infrastructure that can be utilised on both on event and non-event days.

Construction is on schedule for Perth Stadium to open in time for the start of the 2018 AFL season.

The Westadium Consortium has significant international stadia experience and its members have been involved in an impressive array of past projects, including the recently completed and highly acclaimed Adelaide Oval redevelopment, ANZ Stadium Australia and the Dallas Cowboys Stadium in the USA. The Consortium is made up of the following members: John Laing (Equity Investor and Asset Manager), Brookfield Financial (arrange finance), Brookfield Multiplex (Design and Construction Sub-contractor) and Brookfield Johnson Controls (Facilities Manager Sub-contractor).

There is also a team of award-winning designers involved in the project, including: HASSELL, COX Architecture, HKS and Arup – who have been credited with creating renowned sporting projects including the Sydney Cricket Ground, Adelaide Oval’s new western stand, USA’s biggest stadium – the 100,000 capacity AT&T Stadium in Texas, and the Beijing 2008 Olympic National Aquatics Centre ‘The Bird’s Nest’.

The Stadium Operator contract was awarded to VenuesLive in June 2016. VenuesLive will be the day-to-day operator of the Perth Stadium and Sports Precinct.

All enquiries relating to the supply of products and services for the operational phase of the Perth Stadium and Sports Precinct can be made via the VenuesLive website.

To register your interest in employment opportunities for the day to day operations of Perth Stadium please visit VenuesLive Recruitment.

Perth Stadium and its surrounding Sports Precinct is being delivered using a Design-Build-Finance-Maintain (DBFM) procurement model. Under this model, the State has contracted with Westadium consortium and they will be responsible for design, construction, partial finance and maintenance over the initial 25 years.

Opportunities to supply products and services for the construction phase will be advertised through the Chamber of Commerce and Industry WA’s ProjectConnect website.

For all other enquiries relating to the supply of products and services for the Perth Stadium and Sports Precinct, please email Westadium.

The contract to construct Stadium Station and associated railway infrastructure was awarded to PRISM Alliance, made up of Laing O’Rourke and AECOM.

All enquiries relating to the supply of products and services for Stadium Station can be made by emailing PRISM Alliance.

The contract to design and construct the Swan River Pedestrian Bridge was awarded to York Rizzani De Eccher.

All enquiries relating to the supply of products and services for the Swan River Pedestrian Bridge can be made by emailing York Rizzani De Eccher.