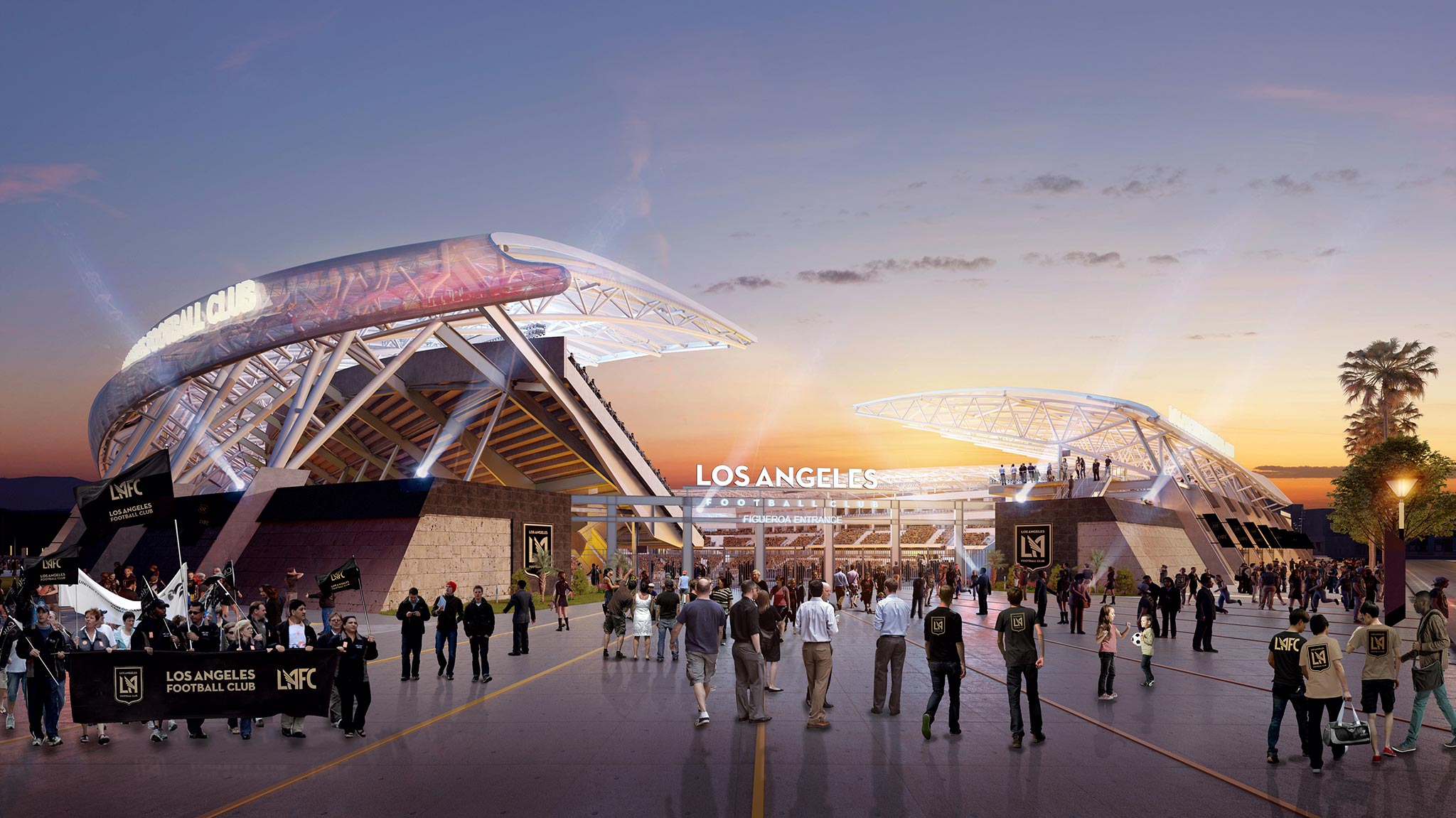 The Los Angeles City Council voted unanimously this week to give final approval for Los Angeles 2024 (LA2024) and authorise the City of Los Angeles to sign the Host City Contract with the International Olympic Committee (IOC) for the 2024 Olympic and Paralympic Games.

LA 2024 Chairman Casey Wasserman and CEO Gene Sykes were joined by more than 50 Olympians and Paralympians from seven nations at the Council meeting for the vote, including US IOC Executive Board Members Anita DeFrantz and Angela Ruggiero, along with Candace Cable, Janet Evans, Michael Johnson and Apolo Ohno.

The City Council’s decision legally empowers the City and the US Olympic Committee (USOC) to accept without restriction the right and responsibility to host the Games if Los Angeles is elected by IOC members on September 13 in Lima, Peru. As part of its final submission to the IOC on February 3, LA 2024 will provide a full set of guarantees against any budget shortfall that fully complies with the IOC’s requirements.

These guarantees are possible because, in developing its fiscally responsible and sustainable Games Plan, LA 2024 sought to eliminate scenarios which could create unexpected costs. No new Games-related public infrastructure, no new complex and costly development projects such as an Olympic Village, and no new permanent competition venues are required to stage the 2024 Games in LA. As a result, LA 2024 has been able to present a rigorous, realistic and balanced budget with US$5.3bn of revenue and US$4.8bn cost, as well as US$488m contingency. This budget was independently assessed and ratified by KPMG.

In addition to its low-risk Games plan, balanced budget and significant contingency, additional protection includes private insurance coverage against unforeseen overages, the State of California’s US$250m in contingency funding and LA 2024’s two Memorandums of Understanding with the City of Los Angeles. As part of its bid committee MOU, LA 2024 submitted an updated budget to the City that will be included in Part 3 of the LA 2024 Candidature File, with cost and revenue adjustments less than 1%.

The IOC’s Host City Contract is our promise that Los Angeles is ready to host an outstanding and fiscally responsible Olympic and Paralympic Games. If LA is selected as the 2024 Host City, our low-risk, high-tech and sustainable Games will inspire the next generation to grow the Olympic Movement and provide social and economic benefits for our communities. Today’s City Council approval is its 14th unanimous vote in support of LA 2024 — and it shows that our City is united to bring the Games back to L.A.

When ambitious, progressive cities like Los Angeles have a once-in-a-generation opportunity like the LA 2024 Olympic and Paralympic bid, we owe it to our communities to support the endeavor. On behalf of the City Council, we are comfortable with the level of protection LA 2024 has built into its plans, and today’s unanimous vote reflects that. More importantly, our commitment reflects the desire of an overwhelming majority of Angelenos to share our diverse and energetic city with the world.

LA 2024 has worked hand-in-hand with our partners at City Hall and the USOC to create a plan that is perfectly tailored to the aspirations of the New LA. LA 2024’s fiscally responsible, ‘no surprises’ Games Plan aligns with the IOC’s Olympic Agenda 2020 reforms and has the potential to serve the Olympic Movement long after 2024. The City Council’s unanimous backing is a strong vote of confidence and a historic milestone in our journey to bring the Games back to the City of Angels after 40 years. We are immensely grateful to the City Council and the people of Los Angeles for their continued and passionate support.

The partnership between LA 2024, the City and the USOC is the strongest of any of the US bids I have been involved with. It has allowed us to construct a comprehensive set of guarantees for the IOC, whilst simultaneously minimizing risk for the City and LA 2024 through the use of existing assets. LA 2024 can provide the Olympic Movement with total clarity and certainty on the cost of the Games, so together we can all turn our focus to creating the best experience for everyone. The shared vision among LA 2024 and City Hall puts Los Angeles in an excellent position to realize the full potential of its new Games for a new era.

Image: The new Banc of California Stadium is one of the proposed host venues for LA2024. Courtesy: LAFC 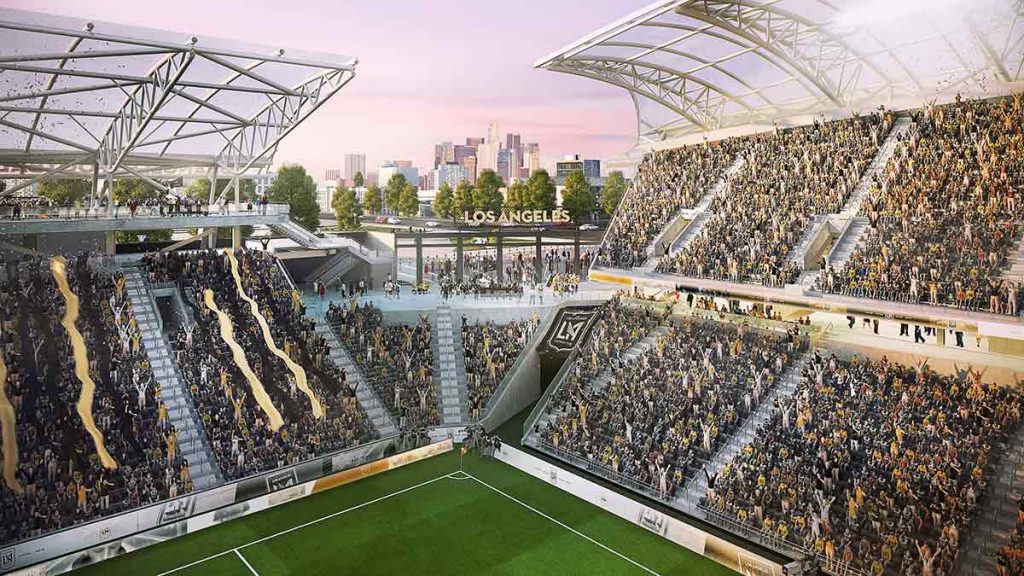 The Los Angeles Football Club (LAFC) announced this week that Will Kuntz will serve as the team’s Vice President of Soccer Operations and Assistant General Manager.

Kuntz will work with the General Manager and EVP of Soccer Operations, John Thorrington, to assemble players and personnel for the club as LAFC prepares to take the pitch for the 2018 Major League Soccer (MLS) season.

Last month, the Club completed demolition of the Sports Arena and commenced construction on Banc of California Stadium, a 22,000-seat, soccer-specific stadium, which will bring more than US$350m in private investment to South Los Angeles, and will be the first open-air stadium built in Los Angeles in over 30-years.

Kuntz served most recently as Director of Player Relations for MLS, and has played an active role with franchise leadership and players in helping to grow the league. Before joining MLS, he served 10 years in the New York Yankees organisation, rising from summer intern to Manager of Pro Scouting for the team.

Will is a top-class person and professional who will prove to be a great asset for LAFC as we continue building a team that makes our city proud.

In his new role, Kuntz will work closely with the team’s executives to bring exciting and promising coaches and players to LAFC that will bring quality to the pitch and represent the community and the club’s growing fan base.

I’m excited to work with John and the entire LAFC team to build a team that will represent our city, our league and our sport. We are already working hard to be able to field a team that will excite our fans and bring another champion to the city of Los Angeles.

Last year, the Club reached several key milestones, including kicking off the year with the official crest and Club colour unveiling for fans and city leaders; scoring a tremendous victory for the Club, its fans and the people of Los Angeles by securing unanimous approval from the Los Angeles City Council on the stadium’s Final Environmental Impact Report; embarking on a historic groundbreaking ceremony with hundreds of Club supporters; announcing its official stadium naming rights, Banc of California Stadium; completion of demolition of the Sports Arena and commencing construction with the first of many foundational concrete pours; and proudly announcing a multi-year partnership with United Soccer League’s Orange County Blues FC in order to further enhance professional player development and create a pipeline for players who show promise to join the LAFC team. 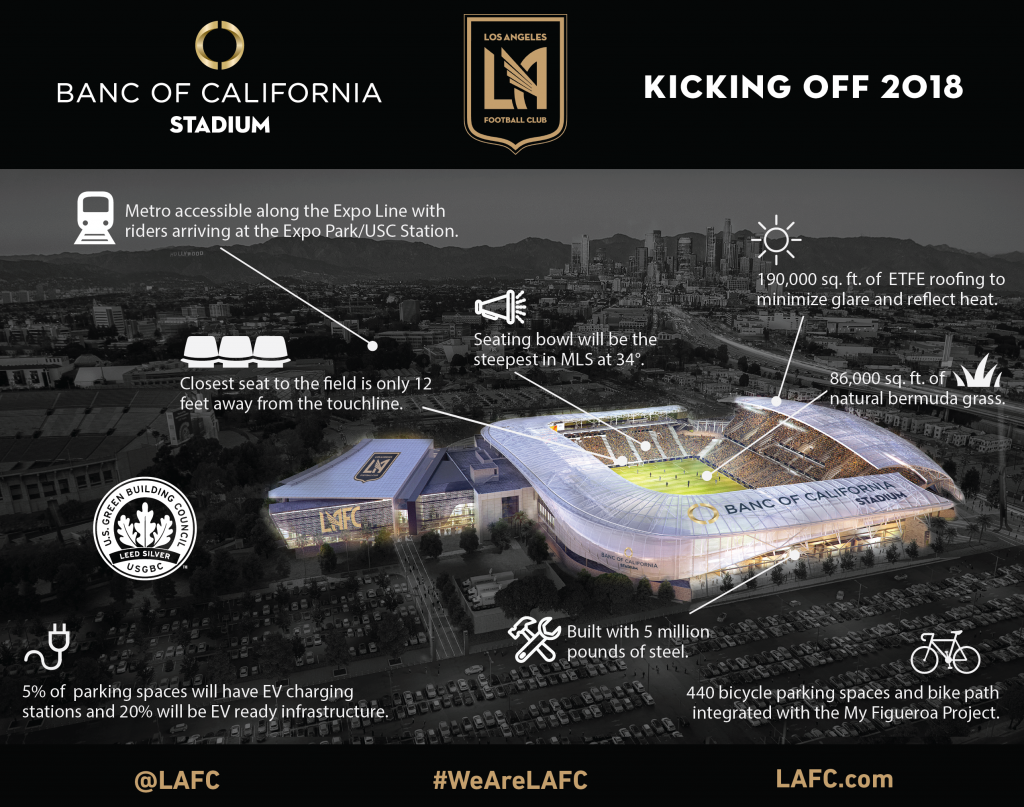