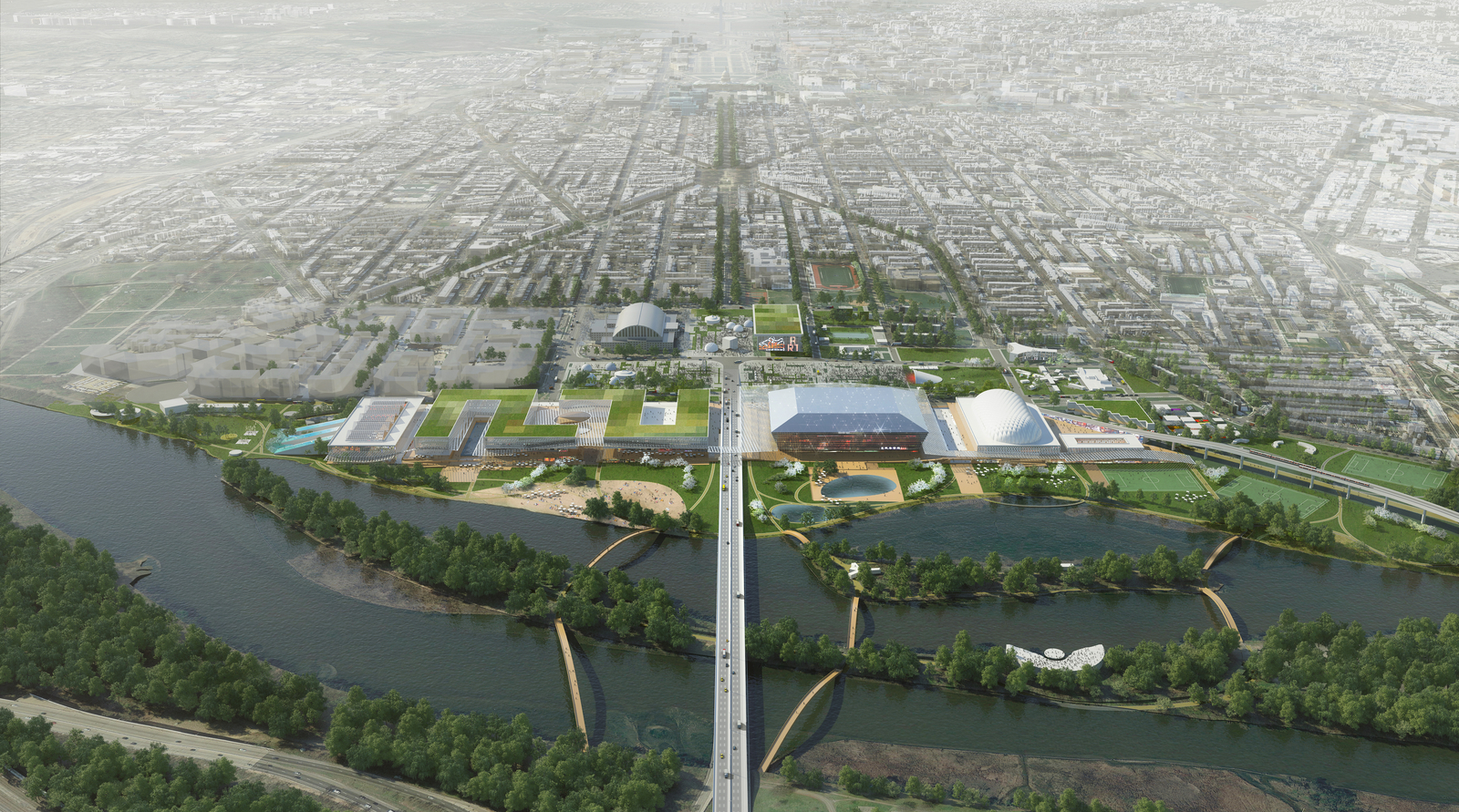 Events DC, the official convention and sports authority for the District of Columbia, recently presented to a citywide audience the proposed short-term redevelopment options for the 190-acre RFK Stadium-Armory Campus. The recommended program elements come from community, stakeholder and city official feedback, and will create a holistic path for the long-term vision of the greater site. Alongside Events DC, the DC-based project management team, Brailsford & Dunlavey and the design team at OMA New York took the feedback received to update the proposal for the Campus, with a particular focus on the short-term elements that provide positive economic and community benefits.

Max Brown, Chairman of the Board of Directors for Events DC, said:

The RFK Stadium-Armory Campus short-term program elements that we have proposed will turn asphalt into active uses – from multi-purpose recreational fields to a permanent food hall that will serve not only the entire city, but importantly, some of the currently underserved areas near the Campus. It remains our top priority at Events DC to restore and transform this iconic 190-acre Campus into a prime example of innovative and flexible urban living that focuses on providing benefits for our residents, their families, and visitors alike. We look forward to making a formal announcement this spring once we receive the appropriate regulatory and government approvals.

After extensive feedback and design review following the initial long-term design concepts presented, Events DC has updated its proposal into a single, long-term vision, which incorporates the strongest and most appreciated aspects of each of the previous concepts. The revised concept highlights the following assets: feasible infrastructure improvements, integrated and hidden parking, utilisation of natural resources and activation of the waterfront corridor.

In response to lots of community feedback, we are pleased to share short-term programs that immediately activate the RFK Campus in a manner consistent with the needs of the community and desires of residents and visitors alike. Our collaboration with DC residents, stakeholders and city officials are vital to the successful transformation of the RFK Stadium-Armory Campus. We look forward to creating positive long-term economic impact citywide for Washington, DC and continuing this important dialogue with key stakeholders, government officials and the local community – as our active partners of this once-in-a-lifetime project.

The RFK Stadium Armory-Campus — currently under-utilised — is poised to be transformed into a vibrant place that connects DC to the Anacostia River. Working together with Events DC, we have formulated a plan that strategically locates new facilities that will draw people to and through the site, while refining the vision for larger redevelopments in the years ahead.

The short-term programmatic recommendations include five community-focused elements, which can be designed and built over the next two to five years. These elements also remain consistent with the long-term vision and goals for creating a more holistic and vibrant destination with the District.

The recommended short-term elements are:

We look forward to working with Events DC in reimagining this important space – named to memorialise my late husband – in a way that is befitting of his legacy. Through this memorial, it is my hope, that together we can help capture his forever-burning spirit and commitment to service.

My late grandfather lived his life every day in the service of others. It is quite appropriate and a testament to his legacy that the space named after him in our nation’s capital will be reimagined as a living monument for future generations to enjoy.

As previously announced back in April of last year, the long-term vision still incorporates provisions for three anchor scenarios: (a) 20,000-seat arena, (b) NFL stadium and (c) No Anchor. All three anchor scenarios reflect a phased approach intended to support and complement the short-term programming elements that will immediately activate the site with uses that will serve and connect the greater DC community.

In the updated long-term vision, new sports and recreational elements will activate the site substantially, allowing it to become a significant bridge to the at-large Monumental Axis, which fully utilises the natural condition of the Campus and leverages the waterfront. The long-term vision emphasises the addition of roads that will provide a cross-grain to the current arterial roads, to make the entirety of the site, program elements and parking more accessible and traversable. In addition, based on community feedback received, the amount of green space will be increased by 240% to make the site more sustainable for years to come.

The RFK Campus redevelopment project’s funding sources include Events DC, as well as public and private partners. Specific partners will be identified and announced as plans for the Campus continue to progress.

This project falls directly within Events DC’s mission to drive entertainment, sports and tourism in the District – as well as economic and community benefits. As a next step, the Company will continue to maintain an open dialogue with the community and will look to receive the appropriate approvals from necessary government and regulatory agencies in an effort to move forward with the proposed short-term elements for the Campus. 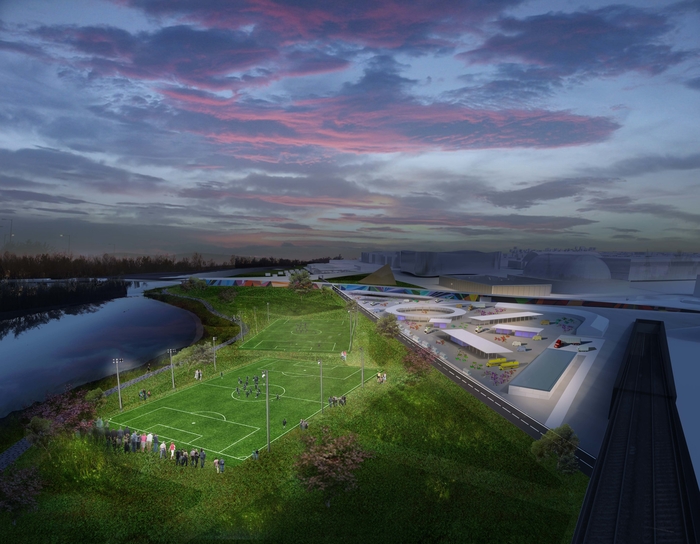 Two new conceptual plans for the 190-acre RFK Stadium-Armory Campus site, located in the Southeast corridor of the District, deliver holistic concepts for the site that leverage the District’s waterfront, provide neighbourhood serving amenities and connect the current site with increased and sustainable green space, flexible recreational fields and natural access to pedestrian-friendly paths. The conceptual planning effort also envisions phasing the implementation of short-term and long-term program elements for the site.

OMA’s goal was to reconnect the campus to existing neighbourhoods to the north and south, to bring the District closer to the Anacostia waterfront and to transform the site from a space designed for watching sports, dominated by asphalt, into a new gateway to DC that elevates public health with diverse recreational programming. Both concepts provide a strategy for revitalising the Campus’ identity from passive space to active place and transform its urban character from pavement to park.

Events DC, in collaboration with OMA New York and Brailsford & Dunlavey, participated in a series of stakeholder and community engagement sessions that focused on capturing input on a new urban vision for the 190-acre Campus surrounding the historic RFK Stadium, Festival Grounds and the DC Armory. The site benefits from its positioning adjacent to the National Mall axis, prominent neighbourhoods and its access to a waterfront gateway along the Anacostia River, which has been underutilised for decades.

The conceptual plans are represented through two design concepts (a) North-South Axis and (b) Stitch, each illustrating a different configuration or layout of the site. These design concepts offer two alternative approaches to addressing parking, infrastructure and road network, pedestrian connections, site conditions and program placement.

The long-term opportunities for the North-South Axis and Stitch design concepts offer an extension of all of the program elements delivered in the short-term, plus additional long-term program elements, inclusive of an anchor tenant and the related supporting site and infrastructure enhancements.