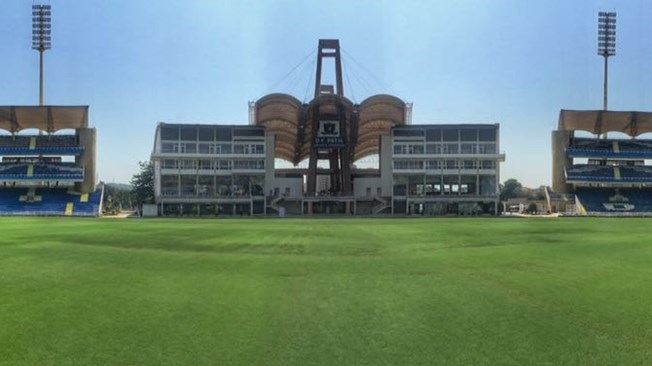 DY Patil Stadium, which is one of the host venues for this year’s FIFA U-17 World Cup, being held in October, is set to have a new look for the mega football event, with all 55,000 seats to be upgraded.

In view of the (FIFA U-17) World Cup, we are changing all our chairs in the stadium and the stadium will have a brand new look.

Patil advised that the new seats would be designed in such a way to provide “comfort to the spectators”.

During his announcement (made in December 2016), Patil also confirmed:

This work will get completed by May… My view is that the best facilities should be provided and we are going with that philosophy.
The existing facilities are also being refurbished and renovated for the World Cup. We have put in place new dressing rooms among other things.

The FIFA U-17 World Cup will be October 6-28, 2017, with the other host venues being located in Goa, New Delhi, Guwahati, Kochi and Kolkata.

On October 20, 2016, a FIFA team ratified the DY Patil Stadium as a venue for the tournament.

It will be a historic moment when the 17th edition of the FIFA U-17 World Cup kicks off in India this October, with the world’s second-most populous nation hosting a FIFA tournament for the first time.

FIFA President, Gianni Infantino, said upon the unveiling of the tournament logo in September:

It is clear for all to see how football has already been making huge strides in India. However, there is still so much room for growth, and the FIFA U-17 World Cup can be an ideal catalyst to develop the sport even further and across the whole country. This is an exceptional opportunity to combine two of FIFA’s core missions: to organise tournaments and to promote football development.

We are very happy to complete the process of ratification of venues for the FIFA U-17 World Cup India 2017 with Kolkata. This was a big step for the tournament; now, with less than a year to go, it is important for us to focus on all the details that will make India 2017 a successful event, such as the operational planning, and we’ll put emphasis on the promotional aspect to make sure that India takes full advantage of hosting its first FIFA World Cup in history. We really have to make this one count.

Five of the 24 FIFA U-17 World Cup participants have already qualified: India (as hosts), Asian champions Iraq, as well as Iran, Japan and Korea DPR. Qualification will conclude in May 2017 with the UEFA European Under-17 Championship, which takes place in Croatia from May 3 to 19. The group stage draw for the U-17 World Cup will then take place on July 7.

The Dr. DY Patil Sports Stadium is a football and a cricket stadium in Nerul, Mumbai, Maharashtra, India, officially inaugurated on March 4, 2008. The stadium originally offered capacity for 51,000 spectators, which is being extended to 55,000 for the FIFA event.
The stadium is renowned for having world-class facilities, having been designed by Hafeez Contractor, one of India’s premier architects. It holds the distinction of hosting the final of both the Indian Premier League (cricket) debut season in 2008, as well as the final of the inaugural season of the Indian Super League (2014).

An idiosyncratic feature of the stadium is the cantilevered gull wing roof, which ensures that no spectator has a restricted view. The stadium roof is made from fabric imported from Germany, which is India’s first and largest fabric roof. The masts are also the tallest in the country, and provide excellent lighting throughout the ground. It is named after Dr. DY Patil who is an Indian politician, former Governor of the State of Tripura between 2009 and 2012, and the State of Bihar between 2012 and 2014, one of the leaders of the Indian National Congress Party in the State of Maharashtra and recipient of the Padma Shri, the fourth highest civilian award in India, in 1991.