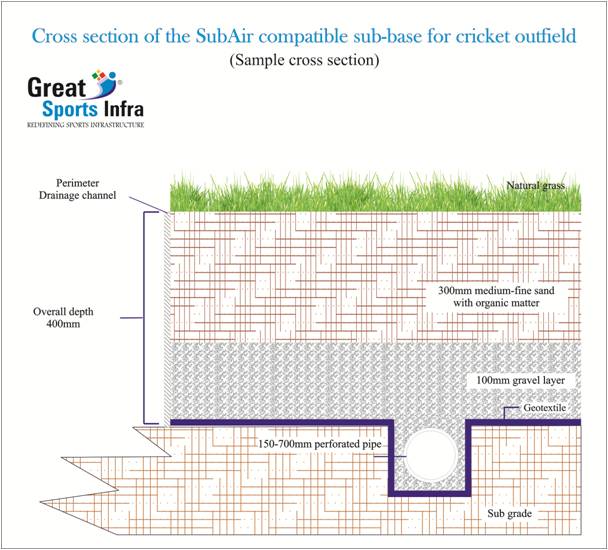 Headlines like “Match called off” and “Match delayed at Chinnaswamy Stadium due to wet outfield” will soon be a thing of the past, now that the KSCA has debuted its next-generation cricket outfield at the venue.

The Karnataka State Cricket Association (KSCA) has installed the next-generation subsurface aeration and vacuum-powered drainage system from U.S. company SubAir at Chinnaswamy Stadium in Bangalore, India, making it the first ever installation of such a technology for cricket stadiums worldwide.

This is KSCA’s latest project in our constant endeavour to introduce cutting-edge technologies in the interest of the game and the fans. Everyone understands that when it rains, it is an act of God…but once it stops raining, it will be inexcusable to delay or cancel a game due to a wet outfield. With this high-tech solution from SubAir, fastest resumption of the game is now possible.

The SubAir system automatically kicks into action the minute it starts raining, thereby not allowing any build-up of water on the outfield. It quickly removes standing water (36 times faster than drainage by gravity), virtually eliminating the need for extended game delays or cancellations due to wet outfield conditions.

So, in reality, it could start to rain at 2am on the day of the match and with no manual intervention, the suction system will automatically activate, thanks to signals from the remote sensors embedded in the field, and the water will start to be evacuated at the rate of over 10,000 litres/minute. As the system is capable of evacuating water faster than it can rain, the outfield is therefore ready for play within minutes of the rain subsiding, marking a generational leap forward from when stadiums used to begin water drainage or sopping operations once it has stopped raining.

Fan experience is our primary objective. Additionally, there is a risk of Rs.80-100 Crores (US$12-15m) when a game gets washed out including losses to the paying public, the TV broadcasters and advertisers, in-stadia advertisers, etc. We believe we have addressed this challenge with the SubAir System.

This technology makes tremendous economic and financial sense for KSCA and many games will be saved in the future.

Additionally, the SubAir Sport System provides the Grounds Staff at Chinnaswamy Stadium with the ability to promote healthier, stronger and safer turf. With its aeration function, which operates around the clock, the system provides an optimal growing environment for the root zone, thereby minimising turf diseases, algae, excessive thatch and black layer. The aeration function also helps in reducing the surface temperature on the turf, making it more comfortable for the players. 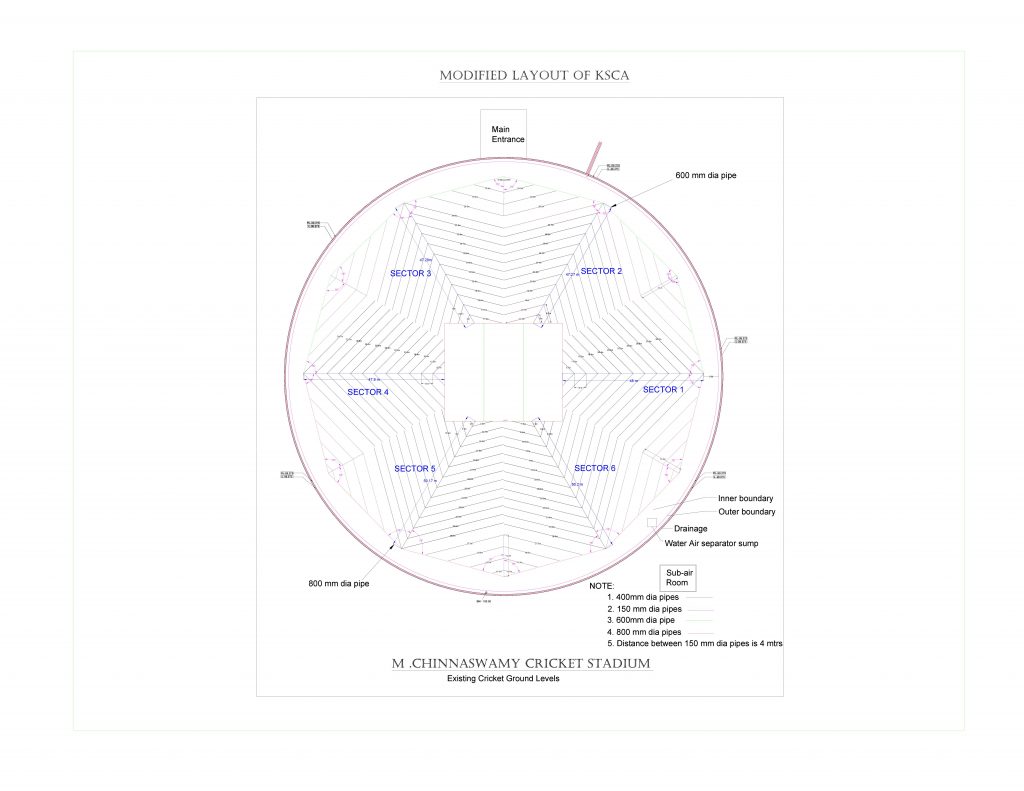 Image showing the layout of the pipes laid at Chinnaswamy Stadium

Hyderabad-based Great Sports Infra (GSI), South Asia’s leading provider of turnkey solutions for sports infrastructure and also the exclusive licensee of SubAir for cricket stadiums worldwide, designed, supplied and executed the project. The scope included a massive renovation of the outfield along the lines of USGA standards. This meant excavating over 1,000 truckloads of soil, grading, compaction, laying geo-textile, trenching, laying perforated pipes ranging from 150mm to 800mm in diameter (totalling a network of over 4.5km), gravel layer and a layer of finely graded sand mixed with organic manure and nutrients, before the Bermuda grass was planted on top. The final result possibly surpasses the best outfield anywhere in the cricketing world.

The sub-surface network of perforated pipes is configured in a closed loop and connected to the SubAir Sport System, which is housed under the stands. The combination of this sub-base design and the SubAir system helps optimise the use of water needed for the turf, with all rainwater and any excess irrigation redirected for rainwater harvesting.

We are glad to provide the SubAir aeration and water evacuation technology to KSCA, which will make it the most modern outfield in the cricketing world. Considering that millions of dollars are at risk when a match gets cancelled due to a wet outfield, KSCA has shown great vision in pioneering the use of this next generation technology. Many other cricket stadiums are now interested in adopting the same for their modernisation plans.

SubAir has proven itself across various sports like baseball, soccer, rugby, golf, etc. This system is used at some of the best stadiums worldwide, including Wembley (UK), New York Mets, Seattle Mariners, BMO Field (Canada), Etihad Stadium (Manchester City) etc., and has over 500 installations. It has also been used for the NFL, 2014 FIFA World Cup™ (Brazil) and will also be in use at the upcoming 2018 FIFA World Cup Russia™.

Currently, there is no scientific measurement of actionable data related to salinity, temperature and moisture content. The SubAir system acquires data from all over the field through embedded wireless sensors and then takes appropriate corrective action keeping the field healthy and in optimal condition, fostering stronger roots and turf.

The Karnataka State Cricket Association (formerly the Mysore Cricket Association) is committed to developing Karnataka as the premier cricketing state in India. It aims to take the game to mofussil areas of the state for development at the grassroots level and to continuously promote the welfare of its players. The KSCA was founded during the year 1933-34 and is affiliated to the Board of Control for Cricket in India (BCCI). The Association made steady progress from 1934 to 1959, when the Silver Jubilee was celebrated to coincide with the visit of the Australian team to Bangalore to play against the Combined Universities XI.

In the late ’60s, the Association acquired its own cricket ground and the stadium now known as the M. Chinnaswamy Stadium came into being. Bangalore became a Test centre, and several memorable Tests and One-Day International (ODI) matches, including the 1996 World Cup quarter-finals, have taken place here. The Karnataka State Cricket Association has grown from strength to strength and is today one of the best-organised State Cricket Associations in the country. The Association today has over 4,000 members from diverse backgrounds.

SubAir Sport is automated based on data received from the field through the AirWave monitoring and control system. AirWave receives and reports soil data (salinity, moisture and temperature) via wireless sensors placed at critical positions within the soil profile throughout the field. The data then prompts the SubAir Sport System to perform according to the levels and parameters set by the turf manager. Every operation of the SubAir Sport is fully automated and accessible through any internet connection or wireless device.