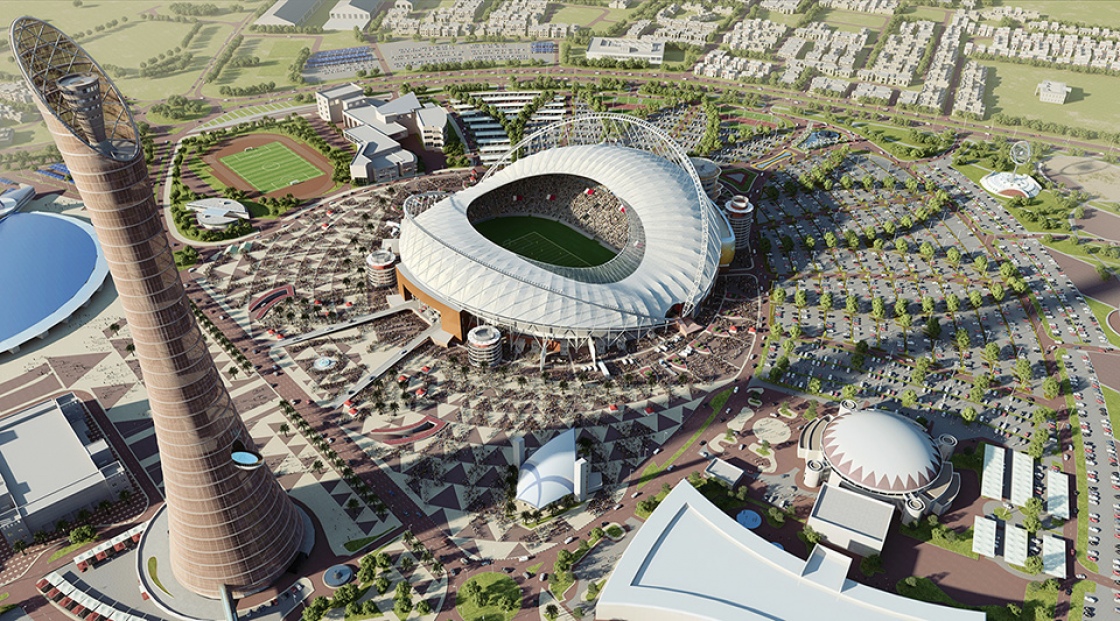 Khalifa International Stadium’s innovative new roof, which will provide shade to both the stands and the pitch, while letting sufficient sunlight through to ensure healthy grass growth of the natural turf pitch, is nearing completion.

With the ‘big lift’ operation of the roof completed in 2016 and the roof membrane installation due to end later this month, the transformed stadium looks set to meets its slated completion date of ‘the first quarter of 2017’.

The main components of the roof membrane were manufactured in Japan and the USA* respectively; the 44,000m2 membrane, consisting of three materials, is being used to achieve FIFA’s requirements regarding sunlight over the pitch on the first proposed host venue for the 2022 FIFA World Cup Qatar™ set for completion.

When we did the shadow analysis we noticed a portion of the southern side of the field of play wouldn’t get any sunlight if we used only PTFE. Meanwhile, ETFE is a more transparent material that allows more than 80% of sunlight to go into the turf.

An intricate net of German- and Italian-made steel tension cables weighing 4,000 tonnes hold up the 92 panels that make up the roof. Both the ETFE and PTFE panels were shipped from Japan and the USA to Mexico, where the cutting and welding patterns were made.

We are very pleased with the progress on site, from the exterior parts to the forthcoming installation of the new roof structure. It will be a proud moment for everyone in the team when the construction is completed for the first proposed host venue for the 2022 FIFA World Cup Qatar™, and this is what the team on site is working towards on a daily basis.

Once the renovation process has been achieved, the ‘new’ Khalifa International Stadium will seat more than 40,000 spectators and will be completely cooled, including the field of play, all seats and the concourses.

The design of the roof is a fantastic idea from an engineering perspective. ETFE is a material that is now becoming popular for this type of use and it was also used for the Allianz Arena in Munich.

The majority of the ring is assembled on the ground and later pulled up in what we call the ‘big lift’. The inner ring is being connected to the two arches using tension cables. This activity is now completed. And the inner roof structure starts receiving the actual roof membrane.

The external cladding and first LED screens are also coming up around the exterior of Khalifa International Stadium. Installation of the LED screens has been taking place on the entrance wing of the 3-2-1 Qatar Olympic and Sports Museum, which will form a part of the renovated stadium, while cladding can be seen going up all around the venue as it moves towards the completion stage.

The historic stadium needed to undergo the comprehensive renovation to meet the requirements and standards for FIFA World Cup™ stadiums, which included adding a new building to the east wing, construction of an Olympic sports museum and building a single roof to cover the whole seating area. It is a proposed host venue for 2022 FIFA World Cup Qatar™ matches through to the quarter-finals.

A total of more than five million man-hours have been worked on site without any lost time, with site safety a top priority across all construction activities taking place at Khalifa International Stadium and all Supreme Committee for Delivery & Legacy (SC) programme sites.

The stadium holds a special place in both Qatar’s and the region’s sporting history, having hosted some of the most important local, regional and international sporting events since it was originally constructed in 1976, including the Gulf Cup on two occasions, the FIFA U-20 Youth World Championships in 1995, the 2006 Doha Asian Games, and international friendly matches between some of the top football teams in the world. In 2019, the stadium will also host the IAAF Athletics World Championships.

Dar Al-Handasah are the design consultants and project supervision consultants behind the Khalifa International Stadium renovation and surrounding precinct, with Projacs serving as the project manager. Qatari contractor Midmac will renovate the stadium and precinct in a joint venture with Six Construct Qatar, the local subsidiary of Belgian firm Besix.

*Taiyo Middle East, a Birdair subsidiary, was selected to provide the design, fabrication, supply, and installation of the membrane roofing system for the renovation of Khalifa International Stadium in Doha, Qatar, which has been named a 2022 FIFA World Cup™ venue. With Projacs serving as the project manager and Dar Al-Handasah as the design consultant, the renovated stadium will have a unique, modern design and aesthetic, containing a combination of three major product lines for the roof system: PTFE fibreglass membrane, single ETFE film and Tensotherm™, a translucent insulated tensioned membrane system. Birdair provided the design, fabrication and supply of all three membranes. The majority of the roof system will feature approximately 500,000 square feet of PTFE fibreglass membrane. An approximate 35,000 square feet portion of the south leading edge of the roof utilises a single-layered ETFE film supported by a cable net. Lastly, another portion located on the lower edges near the compression ring, incorporates Birdair’s Tensotherm system to provide thermal performance. The installation of all three membrane systems was performed by Birdair’s subsidiary, Taiyo Middle East, located in Dubai.