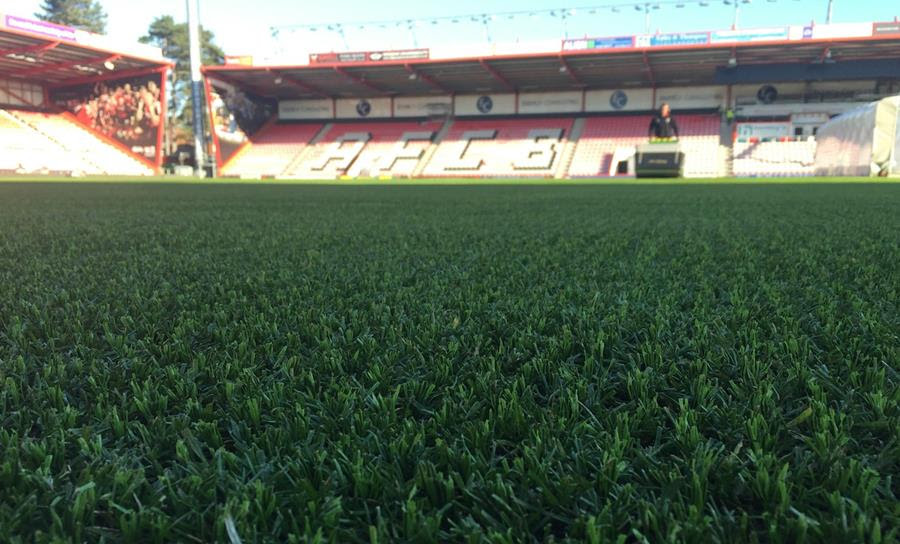 How do you set about educating clients on the best pitch solution to meet their specific demands?

Firstly, it is important to understand what the client wants to achieve from their pitch. What performance level is required? Who will use the pitch? How much usage is expected each week? What maintenance resource is available? Depending on the specific requirements, we are able to suggest the best options, whether that be a synthetic pitch for a local school or a hybrid natural grass pitch for a professional football club. The key is understanding what the client is looking to achieve from the surface and providing the right solution to satisfy their requirement/s.

How important is ongoing and proper maintenance to keep an elite-quality field in optimal condition?

Maintenance cannot be underestimated. It is key to keeping any pitch in the best possible condition and prolonging the life of the surface. Without the correct and appropriate maintenance, pitches can very quickly deteriorate and lose their performance which can, if left, become a safety issue for users. Under-maintained pitches, synthetic or natural, can easily become too hard, slippy and inconsistent, making them less attractive to users. The level and quality of maintenance can have a large impact on whether a pitch will last from a few years up to ten years.

We have witnessed an exponential growth in the number of clubs/venues utilising artificial &/or hybrid systems over the last 2-3 years. How do you see this market developing over the next 5-10 years? And what sorts of advancements can we expect?

I see more and more synthetic and hybrid pitches being required in the next decade. With the levels of funding for sport only increasing, the demand for more new facilities and refurbishment of older ones will only increase. Clubs and other users are expecting more and more from their pitches, pushing research and development to come up with newer, more resilient products and systems. New pitches will continue to evolve utilising the latest in yarn technologies and new, environmentally-friendly infill solutions all which will narrow the gap between the performance of synthetic and natural pitches.

I understand SIS recently launched the SIS Hydrobox. Can you tell us more about this pop-up irrigation solution and why you decided to create your own solution as to oppose to using a system already on the market?

The SIS Hydrobox was developed because there was no other solution like it available. Groundsmen complained about access to infield sprinklers when things go wrong with them, leaving the only solution to dig up the turf around it to carry out any repairs. Digging up any turf on a pitch is not what any Groundsman wants to do, especially if they have a stitched hybrid system like SISGrass, because all of the fibres get removed or disturbed and have to be hand stitched to re-instate the area. The Hydrobox is a simple box solution to allow quick and easy access in and around infield sprinklers with minimal disturbance to the turf surface itself.

Can you tell us a little about 1-2 of your most recent installations. How these came about? The process from contract to delivery, and ongoing maintenance?

We have recently completed the installation of our SISGrass hybrid turf system for AFC Bournemouth at their Vitality Stadium. This is our first Premiership stadium pitch installation with SISGrass. The Club had been looking to reinforce their pitch and decided to take advantage of a rare four week break in home fixtures knowing SIS Pitches had the capability to install SISGrass within a short period.
Works commenced and the installation was completed in just ten days, only seven days before Bournemouth hosted Liverpool in a crucial league match shown live on TV. We worked closely with the AFC Bournemouth grounds team, who were magnificent throughout, and discussed ongoing maintenance and preparations for the big match post installation to ensure the best possible surface was achieved.
Feedback following the match was extremely positive.

Can you provide us with a brief overview as to the solutions and services that SIS provide?

SIS Pitches are a specialist provider of natural, hybrid and synthetic turf sports pitches around the world. SIS Pitches is unique in our ability to offer the design, manufacture, construction and maintenance of sports pitches.

And in which regions is the Company active?

The Vitality Stadium (pictured top) has become the latest high profile ground to introduce the revolutionary SISGrass hybrid system, hot on the heels of the Luzhniki Stadium, home of the 2018 FIFA World Cup™ final in Russia.

In a rare move for the industry, work to transform the pitch was carried out with the season well underway, and was completed in just 10 days this November.

British company SIS Pitches installed the revolutionary SISGrass system into the existing turf surface. It will make the Cherries the first side in the top flight to use the latest hybrid pitch technology for competitive fixtures.

AFC Bournemouth isn’t alone in using SISGrass technology. As well as the Luzhniki Stadium, other stadium installations in 2016 include the Ta’Qali National Stadium in Malta and the Vodafone Arena, home to Besiktas J.K.

The new pitch looks great and feels fantastic underfoot. A good playing surface is crucial when it comes to performance and preventing injuries and I’m sure the squad will reap the benefits as we head into the second half of the season.

We’re delighted to be making Premier League history with AFC Bournemouth by providing them with a new hybrid pitch. Any pitch installation takes time and with such a tight deadline, we knew we had to rise to the challenge to ensure that the pitch would be ready for the team ahead of Sunday’s game.

Both sides have lots to play for going into the busy schedule over the festive period and into the New Year and we are very pleased to have completed the installation without any disruption to fixtures.

SIS Pitches has many years experience in delivering natural turf pitches and synthetic turf pitches to some of the greatest names in sport as well as to schools, colleges, universities, sports clubs and local authorities. The Company has offices in the UK, Ireland, Russia, Turkey, Holland, the Middle East and Angola.