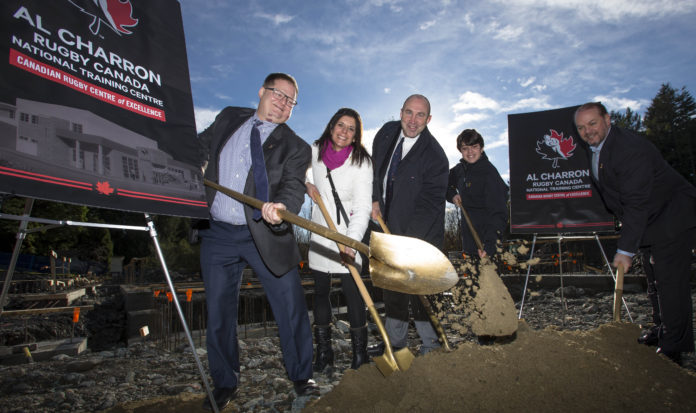 Rugby Canada has confirmed this week that the new training facility located at the Centre of Excellence in Langford, BC, will be named the Al Charron Rugby Canada National Training Centre.

The announcement comes as His Worship Stewart Young, Mayor of the City of Langford and Allen Vansen, Rugby Canada’s CEO, were on site to officially break ground for construction to begin on the Al Charron Rugby Canada National Training Centre.

Vansen said at the December 5 groundbreaking:

The Al Charron Rugby Canada National Training Centre is a critical resource for the development of Rugby Canada’s National Teams. Rugby Canada is grateful for the investment the Government of Canada has made towards this facility and its leadership in inspiring Canadians to participate in sport. Today’s announcement is possible because of the tremendous effort and financial support by numerous committed donors and partners.

We are excited to announce the naming of this world-class facility in honour of a true Canadian rugby legend, Al Charron.  On behalf of Rugby Canada’s Board of Directors and thousands of Rugby fans across Canada, we congratulate Al and his family for this very deserving recognition.  As Al did during his playing days, this facility will inspire and help hundreds of Canadian Rugby players to achieve their best and represent Canada to the fullest of their abilities.

Charron, 50, won a record 76 test caps for his country and played in four Rugby World Cups. He captained Canada 25 times.

I am deeply moved by this honour of having my name on a facility that will help train and mold our excellent Canadian athletes of today and the future for years to come. This is big for my family and I know my late mother and father would be immensely proud of this honoured being bestowed on me and to see the name they gave me attached to a facility like this.

I also cannot forget my other close family and extended family members but most of all my son Rylan or my wife Annette who allowed me to be the person and athlete I was. What I was able to do on the field was only possible due to her love and unwavering support and sacrifices she was willing to make for my benefit and that of my Canadian rugby career.

The 1,765 square metre, two-storey training centre will allow all of Rugby Canada’s teams to train in a single location. It will also be available to support the training needs of other high performance amateur athletes as well as the general public.

The Al Charron Rugby Canada National Training Centre is the single largest investment ever made by Rugby Canada in its pursuit of growing the sport in Canada. The facility, located in the heart of City Centre Park in Langford, BC, will provide Rugby Canada, its athletes, coaches and staff, with the necessary infrastructure to keep its National Teams competitive in domestic and international competition.

Inside the training facility will be a 650 square metre gymnasium, changing rooms with shower and bathroom facilities, recovery and stretching rooms, including one with hydro-therapy facilities, a kitchen/dining and lounge area, meeting, office and storage space, six one-bedroom studio units, a therapy clinic, a reception area, and the recently announced Rugby Canada Hall of Fame.

The Honourable Carla Qualtrough, Minister of Sport and Persons with Disabilities, said:

This project is another example of how the Government of Canada is delivering real results on our infrastructure priorities to benefit communities like Langford and in large and small communities across the country. Our government recognizes that investing in infrastructure is essential to growing the middle class and equipping municipalities with the building blocks they need to support a high standard of living for Canadians and their families.

Once complete, this facility will provide Rugby Canada, its athletes, coaches and staff, with the necessary infrastructure to help our teams stay at the top of their games, for decades to come.

Over his distinguished career, Charron also made five appearances for the famed Barbarians and also suited up as part of the World 15’s squad that faced Argentina to celebrate their centenary anniversary in 1999. Charron played for Bristol, Moseley, Pau and US Dax overseas and domestically suited up for the Ottawa Irish Rugby Club.

The Al Charron Rugby Canada National Training Centre will support elite athletes from across the region and across the country, and inspire a sense of national pride in Canada’s national teams. It will also help bring a community closer together through their shared passion for rugby.

To have my name associated with such a facility when I think of the hoardes of other great men and women who have played rugby for Canada over the years both before and after my time on the scene is overwhelming. It would be remiss of me to not acknowledge my coaches and teammates from high school, to club, to representative rugby at the provincial and national level. I was the player I was due to my time spent both on and off of the field that was forged by the great teammates I was fortunate to have.

The new training centre is the largest investment ever made by Rugby Canada and the Canadian Government to develop rugby talent. Last summer, the federal government committed up to CAN$3m for the Centre, while the City of Langford contributed CAN$2.5m and Rugby Canada close to CAN$1m, with a pledge to raise about CAN$1.5m in total.

The entire project is expected to cost nearly CAN$8m and is scheduled for completion in September 2017.