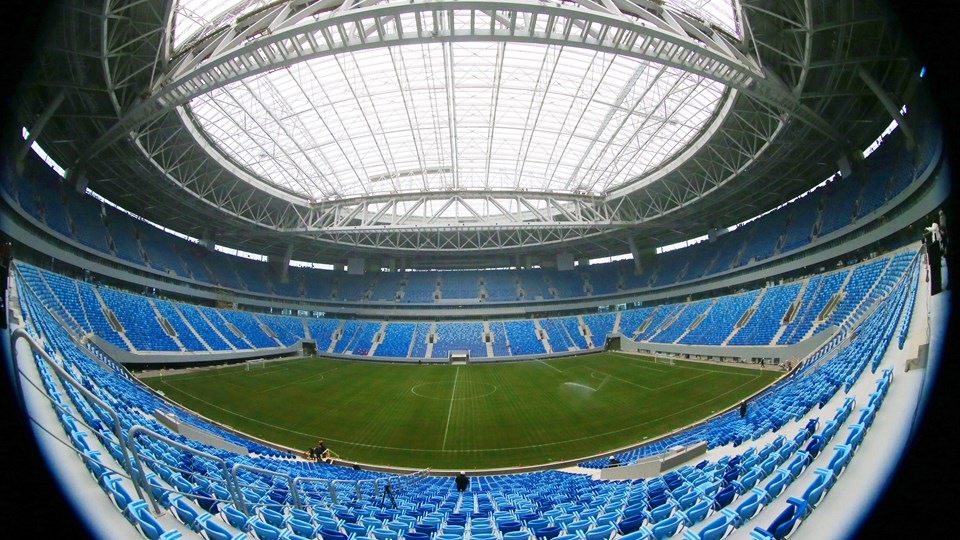 With the 2018 FIFA World Cup Russia™ drawing ever closer, and construction on all the tournament’s stadiums continuing apace, FIFA.com has been providing regular progress updates. The focus for November was on the venues preparing to welcome fans and players at the FIFA Confederations Cup 2017 in less than six months’ time.

The Kazan Arena was the first to be built of the stadiums chosen to host matches at the Confederations Cup and World Cup in Russia. Construction on the venue in the Tatar capital was completed in 2013, ahead of the Summer Universiade, with the memorable opening and closing ceremonies of these games both held there. Two years later, the stadium gained the unique experience of hosting the 2015 FINA World Aquatics Championships in July and August. A huge swimming pool was set up in the heart of this football stadium for that occasion. The Kazan Arena is currently the home ground of the biggest club in Tatarstan, the two-time Russian Premier League champions Rubin Kazan. The first Confederations Cup match to be held here will be Portugal v Mexico on 18 June.

The Spartak Stadium has also been holding top-level football games for a couple of seasons now. After necessary adaptations for the Confederations Cup, the arena will be fully prepared to welcome the tournament.

The main venue at the Confederations Cup is the Saint Petersburg Stadium (pictured above, courtesy: Tass), which is where the Opening Match will be held between the host nation, Russia, and New Zealand, on 17 June, as well as the Final to determine the tournament’s champions on 2 July. Work at the venue is going full steam ahead and the first official match is planned for next April, which will involve local club Zenit Saint Petersburg. This was recently announced by the Chairman of the Russia 2018 Local Organising Committee and the country’s Deputy Prime Minister, Vitaly Mutko, who also said that the stadium will be given over to Confederations Cup organisers after this fixture.

The Fisht Stadium in Sochi, famous as the venue for the opening and closing ceremonies of the 2014 Winter Olympics, will undergo its biggest football test on 19 June, when AFC Asian Cup winners Australia face reigning world champions Germany. A beautiful playing surface has been laid at the Fisht Stadium and building work on the reconstructed areas of the stadium was recently completed. Now the arena’s internal facilities are being brought up to scratch.

The flagship arena of Russia 2018, the Luzhniki Stadium in Moscow, has just launched a special additional lighting system for the pitch, which ensures the grass is kept in perfect condition during the darker months. Eleven units have been installed at the stadium in order to direct light onto the turf and fill in where the sun cannot reach. Another piece of news from the Luzhniki is that nearly 25,000 seats will be put in place before the end of the year. All seats at the stadium will be permanently mounted in February 2017, as confirmed by the Deputy Mayor of Moscow Marat Khusnullin. 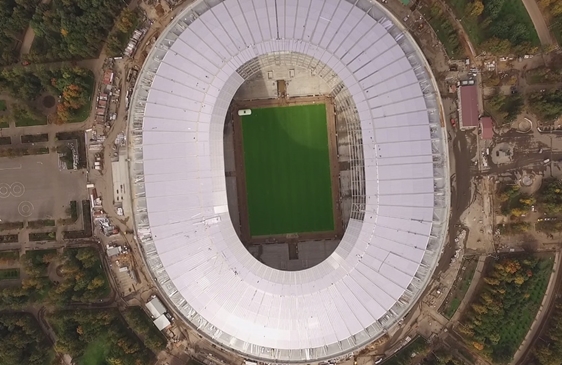 Luzhniki Stadium’s pitch in Moscow has been laid by British company SIS Pitches using the revolutionary SISGrass and was completed for handover in November 2016. The brand new SISGrass hybrid surface will make the Luzhniki Stadium the most technologically advanced pitch in World Cup final history. Image courtesy: SIS Pitches

In Ekaterinburg, the general contractor for the Ekaterinburg Arena renovation project has just begun joining up the internal and external rings of the facility’s roof. On the stadium’s north stand, constructors have already fixed the first connecting piece in place: a radial girder 31 metres in length and weighing ten tonnes. In total, 54 of these girders will be used.

Practically all the cement work has been finished at the Saransk Stadium. Now temporary supports are being installed and metal frameworks are being built on the venue’s roof and main entrances. Builders are pressing ahead with decorative elements and the provision of public amenities as well. The temporary buildings and facilities have also been completed.

According to the construction company, the stadium in Rostov-on-Don is 65 per cent done and they are on schedule. The roof should be finished by the end of the year.

The apron of the roof at the Kaliningrad Stadium is currently being built: eight parts have already been mounted and they are preparing to lift the ninth section into place.

At the Volgograd Arena, progress is being made erecting the accessory buildings and facilities, such as ticket offices, boxes and entrances. Three ticket offices have already been built, along with two access points for vehicle transportation and a main security entrance. The facade of the stadium is currently 75 per cent finished.

The 44-row upper tier and all the stadium’s floors have been fully constructed in Nizhny Novgorod.

Since the Spartak Stadium was opened in Moscow in September 2014, 42 football matches have been held at the venue. Spartak Moscow have played 36 Russian Premier League fixtures there so far, and experienced one UEFA Europa League encounter, while the Russian national team have played there five times.