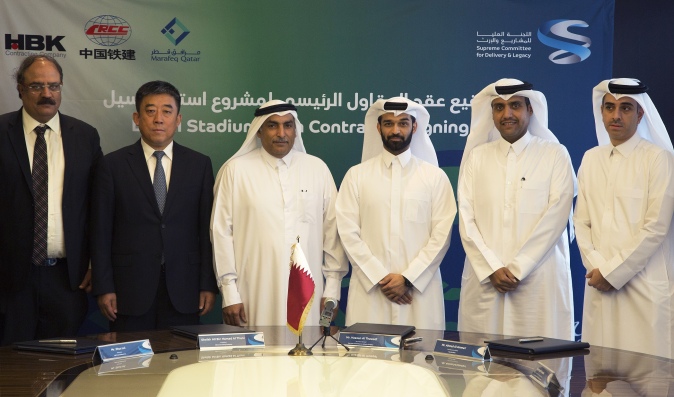 British architectural firm Foster + Partners completed the schematic design of the 80,000-seater stadium earlier this year. The venue, located in Lusail City just 20km north of Qatar’s capital Doha, is scheduled for completion by 2020 and will host the opening and Final matches of the 2022 FIFA World Cup Qatar™ in a little over six years’ time.

We are delighted to award the main contract for Lusail Stadium to HBK and CRCC as a joint venture. The awarding of this contract represents another important project milestone and comes at a significant time as Qatar and the SC have just passed the six years to go anniversary and reach the half-way point in our 2022 FIFA World Cup journey.

Lusail Stadium will be the centre-piece of our tournament in 2022, and post tournament will become an integral part of the community in Lusail City in the legacy phase. We look forward to revealing the Qatari-inspired design and detailed legacy plans to the people in Qatar and football fans across the world next year.

Lusail Stadium and its surrounding precinct will offer a variety of legacy uses to the inhabitants of Lusail City and the greater community after the event, in partnership with Lusail Real Estate Development Company, Qatari Diar and private sector developers. The legacy concept for the stadium will be presented along with the Lusail Stadium design in 2017.

The stadium is located on a one square kilometre precinct plot along the Al Khor Expressway in the western edge of Lusail City, with the south facing the Commercial Boulevard of Lusail City. The long term development plans for the precinct include various unique developments, such as a Theatre District that will be the Middle East’s first of the kind.

We’re very excited that we have been able to bring together such a strong and dynamic construction Joint Venture with renowned Qatari contractor, HBK Contracting, and one of China’s biggest and best, CRCC. The appointment of a local company in this joint venture is also significant and demonstrates our commitment of contributing to the economic legacy for Qatar post 2022. Lusail is such an important project for the SC and Qatar and we look forward to working with both organisations as we head towards kick-off in under six years’ time.

On being awarded the contract as the Lead Partners of the JV, President of HBK Contracting Co. W.L.L., Sheikh Ali Bin Hamad K. Al-Thani, said:

We are extremely thankful that the SC has entrusted us with the responsibility of constructing such an iconic stadium development. Being a Qatari company we are also proud to be part of such an historic national project and will endeavor to do all that we can to ensure we deliver Lusail Stadium with our partners at CRCC to the highest possible standard and in line with the agreed deadlines.

On behalf of CRCC, I would like to extend our appreciation to the SC for entrusting us with the task of delivering the main stadium for the 2022 FIFA World Cup. As a leading enterprise of the engineering and construction industry of China, we are honoured to join hands with our Qatari Joint Venture partner HBK in delivering Lusail Stadium, and we extend our most sincere and best wishes for a successful tournament and beneficial legacy for Qatar and the region.

The SC also announced that it has awarded Marafeq with the District Cooling Supply Agreement, which will see it provide cooling to the stadium. Marafeq will provide up to 30,000 tons of refrigeration to serve the stadium before and during the tournament. All eight stadiums currently under construction across Qatar for the 2022 FIFA World Cup™ will feature innovative cooling technology.

We are honoured to have been chosen to work alongside the joint venture main contractors in delivering the iconic Lusail Stadium, the centerpiece of the 2022 FIFA World Cup Qatar™. We are also very proud to play a part in the legacy of this prestigious development having been chosen to also deliver the district cooling system for the future community of Lusail. Our legacy cooling technology will be optimized for this state-of-the-art venue in a sustainable and environmentally friendly manner and we will be able to produce up to 30,000 refrigerated tonnes without any energy wasted to cool the stadium and precinct.

Construction began on the Lusail Stadium site in 2014, with TIME Qatar as the project managers. Most recently, early works and site office construction projects were completed by Galfar Al Misnad, with levelling and grading works and site and access roads completed by local contractor Marbu Contracting.
By the end of 2016, the main-works contractor will be mobilised on site and the SC plans to reveal the final stadium design to the world in early 2017.

The stadium has been designed to be in harmony with the surrounding Lusail City. To achieve this, extensive work has been carried out to integrate the stadium with the neighbouring masterplan. Regular coordination is held with the local municipal authority for the exchange of engineering information about the utilities and services in order to ensure alignment with the available sources in the area.

The schematic phase was completed with Foster + Partners following an exercise in legacy planning. For Lusail Stadium, we are building a venue which will become an internationally-recognisable landmark, which has a special significance for us all as the proposed host venue for the opening and Final matches of the 2022 FIFA World Cup™.

Lusail City is expected to have more than 200,000 residents and 170,000 people expected to work in the city’s different districts come tournament time in six years’ time.

The city of the future boasts a light rail network, a water taxi transportation system and a cycle and pedestrian network. 30% of the land area will be dedicated to green and open spaces to create a relaxed atmosphere, integrated with lively components of the city.