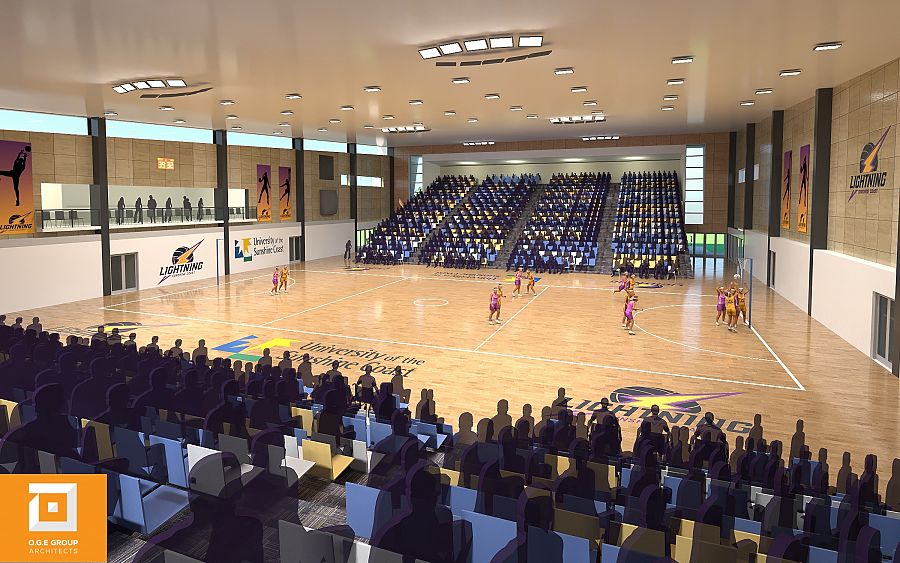 An AU$5m upgrade of the University of the Sunshine Coast (USC) Sports Stadium on campus at Sippy Downs is set to attract crowds of spectators to a wider variety of matches at local, national and international levels from early next year.

The Stadium Project is the latest construction underway at USC’s international standard sport precinct, as the University focuses on expanding its high-performance sports programs and facilities for the benefit of teaching and research, as well as community engagement.

Vice-Chancellor Professor Greg Hill said the USC Sports Stadium would become one of the best sporting facilities in the region, with the installation of retractable seating taking the crowd capacity from 360 people to 2,200.

We’re putting retractable seating at both ends of the building, reinforcing the floor, adding new lighting and installing a court that can be overlaid on the current court for sports such as netball.

On game days, the seating can be rolled out and the new court ‘dropped in’ to give athletes and spectators a fantastic experience, with minimal disruption to any other users of the facility outside start and finish times.

The work, which commened in September, is expected to be completed by February 2017 in time for the first home game of the new Sunshine Coast Lightning national netball team, a joint partnership with Melbourne Storm that will be based at USC.

Professor Hill said telecasts of the netball games next year would help showcase USC and the Sunshine Coast to the rest of Australia.

The USC Sports Stadium has been popular with USC students and staff as well as the surrounding region since it was built in 2006, and this expansion will benefit diverse sports and sporting clubs.

A plan to build an AU$4.2m Sunshine Coast Aquatic Exercise Facility next to the existing Olympic-standard pool in the precinct is also underway, with the USC Spartans Swim Club having gained an AU$1.4m grant from the Department of National Parks, Sport and Racing in a recent round of infrastructure funding called Get Playing Plus.

The money has kick-started the next phase of development within the USC’s national standard sports precinct, which already has USC’s High-Performance Olympic and Paralympic swimming program operating near the region’s only tartan athletics track, and the Coast’s first national netball team, the Lightning, will be training and playing on campus within months.

USC Professor of Sport Science (Biomechanics) Brendan Burkett said the aquatic exercise facility would enable innovative training and recovery for all athletes, along with new research to guide rehabilitation and exercise programs for the broader community.

The new indoor facility will complement the University’s 50m outdoor pool, which gained a high profile this year as 10 USC Spartans swimmers trained for the Rio Olympics and Paralympics. It will include: a six-lane, 25m, graduated depth, heated pool; a state-of-the-art “endless flow” recovery immersion pool; and ancillary facilities.

This will be a fantastic addition to our campus, with benefits for high-performance sport, sport science and medicine in teaching and research, as well as the health and wellbeing of both the USC and wider communities.

We hope the whole region embraces this innovative aquatic exercise service, which will integrate new facilities, coaching staff, training opportunities, and university-led research and encourage a new modality of exercising in water – a perfect fit for our climate.

The contrasting water temperature environment will allow high-performance athletes and any community members to stimulate their recovery from injury, sport or impairment. This will also provide an incredible resource for student learning and research work.

USC Vice-Chancellor Professor Greg Hill said the University was now working to raise the remaining funds, with the aim of completing the project in 2017.

The USC Sports Precinct has always been available for the Sippy Downs and wider community, and we can’t wait to share this new aquatic exercise facility in the same way.

The USC Spartans Swim Club is affiliated with Swimming Queensland and Swimming Australia, and trains at the USC pool. Its two coaches, Jan Cameron for the Paralympians and Chris Mooney for the Olympians, were selected as official Australian coaching staff for Rio.

The Club finished third on points at the 2016 National Swimming Championships and 10 members were selected in the 65-member Australian team for the Rio Olympics and Paralympics – the greatest number of any university club in the country.