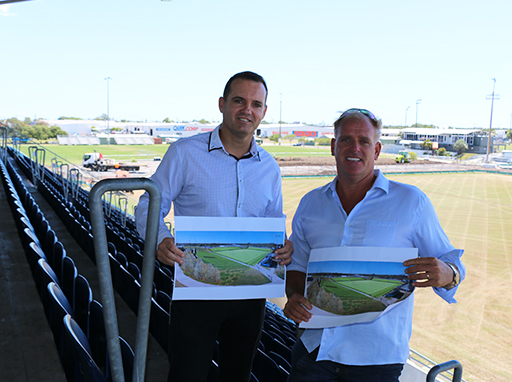 Sunshine Coast Stadium, Queensland’s premier outdoor sports and events facility, will have its capacity boosted to around 10,000 by a A$2.5m project that was officially launched this week.

The upgrade includes new, family-friendly turf hills along the eastern, northern and southern sides of the playing surface, which is being transformed from an oval shape to a rectangular field to allow spectators to be closer to the action. The new stadium will also have a 36sqm LED scoreboard/replay screen.

Due to be completed prior to the start of the next football season, the project is being jointly funded by council’s Capital Works Program and the State Government’s Get Playing Plus Program.

A new irrigation system, electrical works, pathways and driveways, fencing, landscaping and tree planting will complete the upgrade, which represents the biggest change to the stadium since it opened in 2011.

The Sunshine Coast Stadium is a runaway success story and that story is about to get even better.

We have a fantastic grandstand that our patrons love and soon the option will be available for spectators to follow the tradition of watching and cheering on from the hill.

We’ll have great viewing available from all four sides of the ground and the extra elevation, especially on the eastern side, is going to make a real difference to what was there previously.

The big screen will be a permanent fixture and is going to be a very popular one I’m sure.

Tourism, Sports and Events Portfolio Councillor, Jason O’Pray, said Sunshine Coast Stadium’s events schedule made it one of the most used facilities in the state:

Not only is the stadium the home of the Sunshine Coast Falcons and Sunshine Coast Fire, there’s a huge variety of other events – sporting and entertainment – held here each year.

With the capacity rising from around 7,500 to 10,000, there are going to be extra opportunities available for event organisers looking to use our stadium.

Our crowds have definitely grown over the last couple of years and this upgrade is going to make the stadium an even better destination to come and watch the Falcons as well all the other sports and events held here.

We’ll be making full use of the LED screen and I’m sure families are going to enjoy bringing a blanket along and sitting on the hill.

Treasurer and Minister for Sport, Curtis Pitt, said the Palaszczuk Government was pleased to support the project with more than A$480,000 in funding under round two of the popular Get Playing Plus program. He added:

This is a very exciting project for the Sunshine Coast community.

The stadium is a key sporting precinct for this region and these upgrades will help the venue be as flexible as possible to meet the needs of this community.

On completion, the stadium will have the capacity to host high-profile and large-scale events, which will no doubt have economic benefits as well.

The project is multifaceted and includes the re-development of a rectangle field and construction of turf moundings to cater for 10,000 spectators as well as improvements to the, irrigation system, electrical works, pathways, and landscaping.

[The] Council will also undertake further work on the stadium’s façade, driveways, fencing and install a new LED score board.

Pitt thanked the Sunshine Coast council for contributing the remainder of the funding for the project:

It’s always a pleasure to work with clubs, organisations and local councils to help improve club facilities for members and the local community.

I commend Sunshine Coast council for pursuing this terrific project and for its clear commitment to helping the local community get active.

As a government, we want all Queenslanders to have access to the best possible facilities to help them get active for a healthy lifestyle.

Get Playing Plus provides grants of between A$300,000 and A$1.5m to support new projects and major upgrades to existing facilities that support participation in sport and recreation activities. It is one of four funding programs that make up the Queensland Government’s three-year A$100m Get in the Game investment to support grassroots sport and recreation.

Work is expected to be completed at the stadium by late February/early March next year.