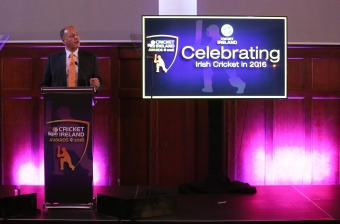 Cricket Ireland have unveiled ambitious plans for the first dedicated outdoor training complex in Ireland, giving top performers of both sexes and all ages the best facilities to help develop their skills on the Sport Ireland National Sports Campus (SINSC).

The Cricket Ireland Performance Centre will be built at the Sport Ireland site at Blanchardstown in Dublin, and feature 14 grass nets, five artificial pull-out bays, a 90m outfield, plus seating and storage areas.

The €600,000 development has been made possible thanks to support from the International Cricket Council (ICC), Denis O’Brien, the Irish Government and Sport Ireland.

For the first time, our performance squads – male and female, senior and junior, national, provincial and academy – will be able to train on a day-to-day basis in a state-of-the-art facility controlled by Cricket Ireland.

We are grateful to the Government and Sport Ireland for providing us with the land, and to the ICC which is clearly increasing its support for Ireland’s aspirations – by granting first-class status to our Hanley Energy Inter-provincial competition; through our elevation to the 12-team ODI structure; and by granting an additional $500k in 2016 and 2017 to help us afford the matches.

I would also like to extend our particular gratitude to Denis O’Brien, who continues to play a vital, yet unheralded role, in the growth of Irish cricket.

For the last 10 years Denis has always been ready to answer our call – from supporting our team in the Caribbean World Cup in 2007 and then our first cohort of contracted players, to helping us stage our major matches and, now, helping us build our first outdoor performance centre.

He has played a central role in helping us punch above our weight on the world stage and, for this, we are enormously grateful.

Sport Ireland is delighted to add cricket to the growing list of sports with a presence on the Sport Ireland National Sports Campus.

Through its performances both on and off the field in the last number of years, Cricket Ireland has shown that cricket has become a sport of national significance.

Earlier this year Cricket Ireland launched an ambitious strategic plan which aims to make cricket mainstream, and the development of these world class training facilities at the Sport Ireland National Sports Campus will assist this objective as the sport continues to grow.

There is a pressing requirement for such a facility to be built to service our increasing number of performance teams, as we found existing clubs are already overstretched in terms of hosting Cricket Ireland activity due to the impressive growth in participation figures in recent years.

It will also provide training for touring overseas high performance teams who often request facilities prior to series against us – 2017 will see New Zealand, Bangladesh, Afghanistan and West Indies visiting Ireland.

We have found that access to high-quality outdoor facilities has been a consistent theme emerging from the last two post-World Cup reviews. We have previously announced warm-weather outdoor plans for the La Manga Club Development (which is almost complete) and this home-based facility will augment that perfectly. We already have four ODI-accredited facilities in Ireland, but no quality outdoor training facilities so this will remedy that.

On basing the facility at the SINSC, Holdsworth felt that it was a natural fit given the unique benefits that the location would offer Irish cricket.

The SINSC is ‘owned’ by sport so guarantees access and maintenance, whereas by contrast, gaining access to club grounds is dependent upon the availability of volunteer personnel and facilities prepared to suitable standards. The establishment on the campus will enable cross-pollination with other high-performance sports, and of course the centre is to be located adjacent to the state-of-the-art Sport Ireland Institute offering close access to their programmes.

The SINSC is now recognised as a world-leader in ‘hot-housing’ performance sport, and includes high performance gyms and testing facilities to which our players will would have access.

Work on the new facility is expected to start subject to the necessary planning permissions in early 2017 with the artificial area being completed ahead of the season, with the grass nets operational in 2018.