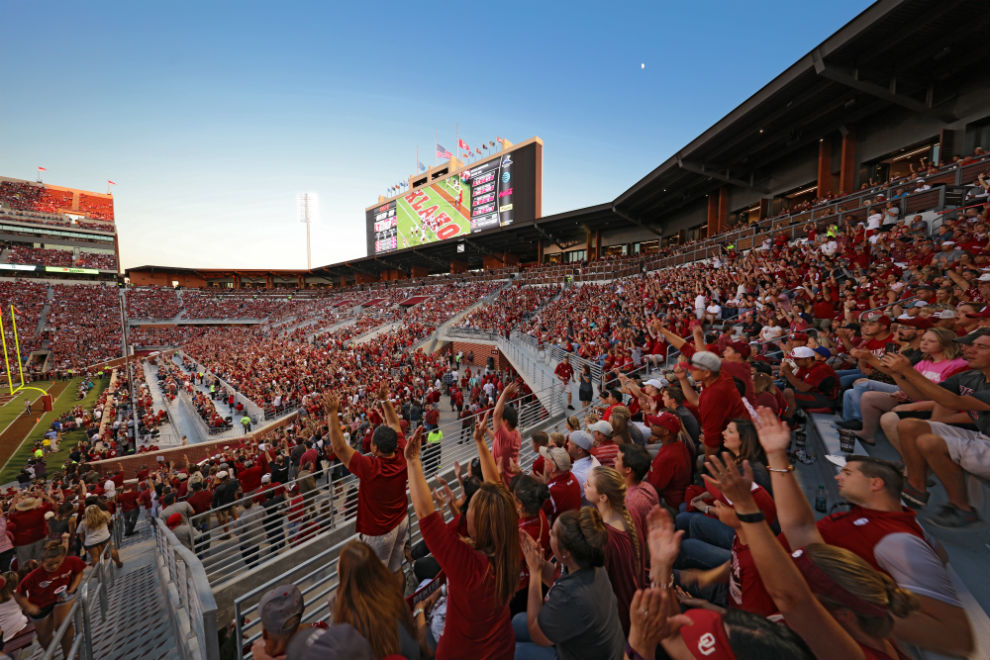 Gaylord Family – Oklahoma Memorial Stadium, one of the most iconic college football venues in the United States, opened for the 2016 season on September 10, marking the first time in history the Sooners football team played while completely surrounded by their fans.

Designed by Populous and new for this year, the venue’s south end zone was completely re-imagined and its previously-open corners filled to complete the seating bowl. The new addition debuted to rave reviews from fans and media alike.

The enclosure nudges capacity from 82,112 to 83,489, but the project’s primary purpose was not to simply add seats. The space was completely redesigned and, in addition to the expanded seating, features a sun canopy, field-view concessions plazas, premium club spaces and a new larger video board.

When you think about what this project has been since we broke ground (last August), it’s truly amazing. This is a whole different viewing experience.

Anna Price, one of three key architects on the project, graduated from the University and has family roots that run all the way back to the Stadium’s original construction. The Oklahoman covered her one-of-a-kind story with a full-length column in a recent edition of the newspaper.

Oklahoma Memorial Stadium’s new grand main entrance and infrastructure will be completed this spring and benefit student-athletes from all OU sports. The ground floor will include a new locker room, coaches’ offices, meeting rooms, a massive weight room, a nutrition centre, a 70-yard turfed speed and agility area, plus a 24,394sqft training room that’s nearly triple the size of their previous training room. The third floor of the building will house the football offices and the team’s video department.

As the only architect to have worked on Gaylord Family – Oklahoma Memorial Stadium over the last 30 years, Populous is thrilled to have worked with the University on this project. Through the now complete seating bowl the Sooners football team enters a new era, fully surrounded by their fans.

Jeannine Edwards, ESPN Reporter, Tweeted after her first visit to the new and improved Stadium:

For first time in history field is totally enclosed.

2nd-largest video board in U.S.

Along with this image: 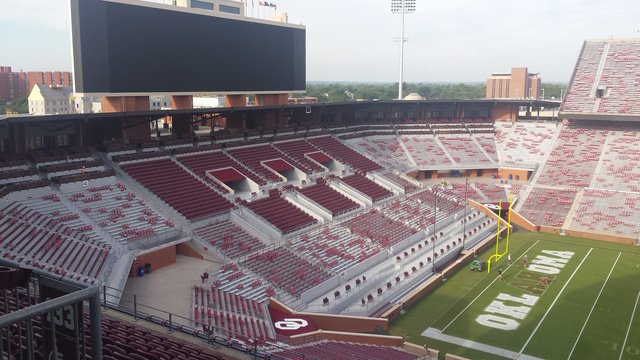