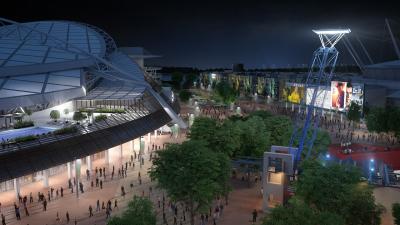 An exciting new vision for Sydney Olympic Park has been released by the NSW Government, which is poised to supercharge the pre-and-post-event experience at ANZ Stadium.

The Stadium Precinct at Sydney Olympic Park will be invigorated under the plan to create a lively 24-hour town centre with dramatically improved transport links to the area.

Planning Minister Rob Stokes, together with Minister for Sport Stuart Ayres, have unveiled the draft Masterplan 2030 for Sydney Olympic Park (2016 Review). You can view the draft plans and make a submission until Tuesday 15 November 2016. You can also watch a video detailing the Masterplan online by clicking here.

These draft plans will help transform the area into a vibrant town centre where residents, workers and visitors can enjoy some of the best that Sydney has to offer.

Minister Ayres said Sydney Olympic Park’s role as a sports and entertainment hub will be further developed and its Olympic legacy recognised and protected under the plans.

In one space, the community will continue to have access to world-class sporting events, concerts and entertainment, amid lively streets bustling with shops, cafes and a buzzing nightlife, as well as parks, open space and shared pathways for cycling and walking.

Have your say on the Sydney Olympic Park Master Plan 2030

The 2030 Masterplan has been updated from the original version that was released in 2010. The plan is in line with Sydney Olympic Park Authority’s vision for a vibrant town centre with a range of facilities and services to support residents and workers on the Olympic Peninsula, while creating a great experience for visitors to this world-class sports and major events destination.

Under Masterplan 2030, the Authority will manage the expansion of the Park to support a daily population of over 60,000, as well as large event crowds. Getting to, from and around Sydney Olympic Park will be easier under plans to improve transport links and access. These include the WestConnex motorway project which is well underway, the proposed Western Sydney Light Rail connection between Parramatta and Strathfield, upgraded streets and pathways for cyclists and pedestrians, a bus service between the Stadium and Rhodes Station across Bennelong Bridge, and upgrades to Lidcombe and Concord West train stations.

As part of the new Masterplan, NSW roads and transport authorities will continue to work with Sydney Olympic Park and the Department of Planning and Environment to ensure the road and transport network is safe and efficient.

Other key points of the Masterplan include:

The Department of Education is investigating the potential for a new high school in the area, while the Olympic Cauldron next to ANZ Stadium will be listed as a heritage item.

The transformation of Sydney Olympic Park will complement the redevelopment of ANZ Stadium into a world-class rectangular stadium.

The NSW Government announced back in April that works would begin at ANZ Stadium in the current term of Government (by 2019).

More than 24.5 million fans have passed through the turnstiles of Sydney’s Olympic Stadium that was purpose-built for the 2000 Summer Games. More than 1.5 million fans will have attended events at the Stadium by the end of 2016 to witness a series of new and unforgettable Australian sporting moments including: