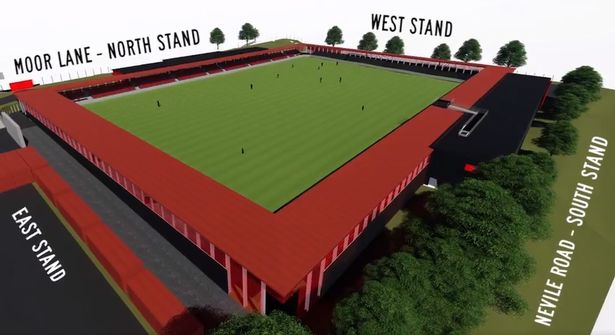 Salford City have revealed exciting plans for the redevelopment of Moor Lane, with a planning application due to be submitted imminently.

Two consecutive promotions have lifted The Ammies into the National League North and the traditional layout and facilities of Moor Lane are now in need of an upgrade.

Plans have been formulated and the Club are now ready to submit a planning application to Salford City Council.

With the help of former Manchester United stars Ryan Giggs, Paul Scholes and Neville brothers, Phil and Gary, the non-league club is aiming to play in the English Football League (EFL). The Man U legends have been pumping money into the Club since taking over two years ago in the hope that promotion to the EFL could one day be achieved.

The plans would see Moor Lane increased to a capacity of more than 5,000.

In a statement released on Twitter, Salford City FC said:

We are delighted to share the proposed designs for our new stadium at Moor Lane, going into planning imminently!

Watch the video of the proposed developments online at: https://youtu.be/zbcw3btYI20