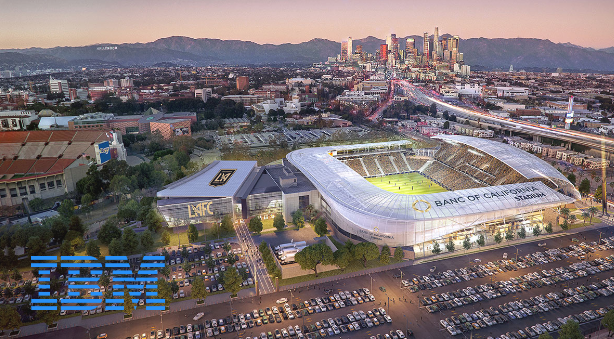 This will be the first Major League Soccer (MLS) soccer-specific stadium partnership for IBM and one of the first professional sports venues to commit to developing such an advanced platform.

IBM and LAFC are working together to reinvent what it means to be “connected” while in the stadium. This collaboration will provide an enhanced fan experience and will be flexible enough to adapt to new and evolving mobile technologies that seamlessly deliver via the cloud the most innovative and efficient operations for the team, stadium management, business shareholders, fans and others.

Set to debut in 2018, the new development, which will bring more than US$350m in private investment to South Los Angeles, will be the first open-air stadium built in Los Angeles in over 30-years.
LAFC President and Owner Tom Penn, said:

We are thrilled about forging this partnership with an iconic international technology leader like IBM. This partnership underscores our Club’s commitment to leveraging innovation for a best in class fan experience. With the pace of technological evolution, this partnership will set us up to provide best-in-class connectivity in the Banc of California Stadium, not only in 2018, but also as we look into the future.

IBM will be responsible for the design, procurement, installation and commissioning of the converged technology infrastructure components, providing wireless coverage and an optimal digital experience for the more than 22,000 attendees inside the stadium as well as sharing with those beyond. The integration of various systems will deliver this world-class experience to engaging fans and partners.

The explosive growth of an immersive fan experience has elevated people’s expectations when they attend any large venue event. Today, stadiums such as LAFC’s new facility are embracing new and innovative solutions that answer the call and in doing so are helping to re-invent the game-day experience.

Additionally, the Wi-Fi infrastructure will include sophisticated and secure digital operations and security. The Wi-Fi services will be delivered via a converged fibre-based network, including an IP-based digital signage and media distribution solution. This partnership will also optimise the venue with an integrated monitoring and security infrastructure that can identify issues involving the stadium’s ingress and egress before they have an impact on fans. This will help create a secure stadium that utilises advanced physical security systems.

LAFC’s relationship with IBM is completely aligned with our organisational commitment to forge strategic partnerships that provide a first-class fan experience and to maximise the technology do so.

Together, LAFC and IBM are taking a fan-centric design approach that will integrate infrastructure, data-management, and personalized digital/mobile engagement through Transformative Sports Enterprise Architecture. This infrastructure design will help ensure a seamless integrated fan experience.

On August 23, LAFC together with club supporters, city and county leaders and representatives from Major League Soccer, hosted its stadium groundbreaking ceremony and announced Banc of California as the official naming rights partner for the stadium. Earlier this year, LAFC proudly unveiled the new crest and team colours, and secured unanimous approval from the Los Angeles City Council on its Final Environmental Impact Report (EIR) and other environmental and entitlement agreements, scoring a tremendous victory for the Club, its fans and the people of Los Angeles. 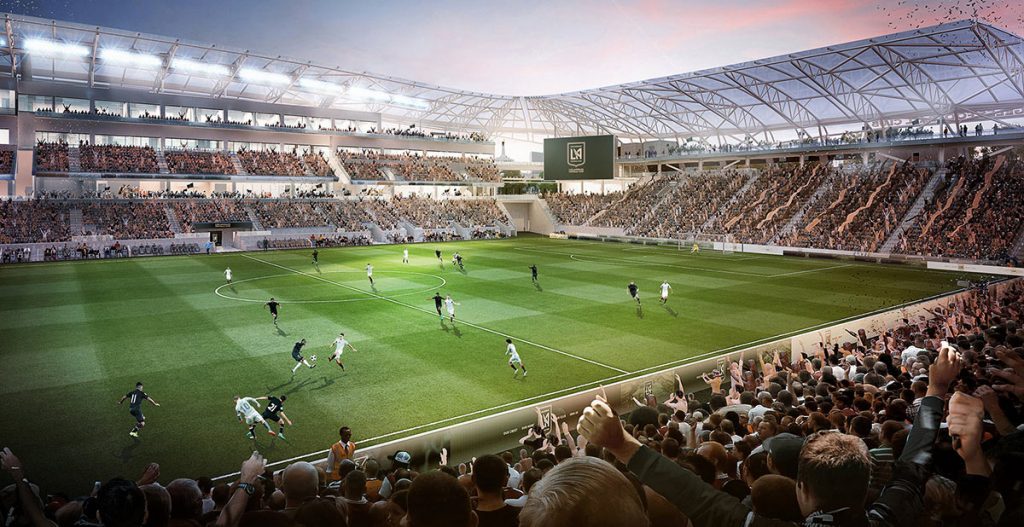 The Los Angeles Football Club (LAFC) is the newest MLS soccer club serving the greater Los Angeles area. Its ownership group is comprised of local leaders and innovators of industry with intellectual capital, financial prowess, operations expertise and success in the fields of entertainment, sports, technology and media. The LAFC ownership group is dedicated to building a world-class soccer club that represents the diversity of Los Angeles and is committed to delivering an unrivaled experience for fans. The home of the Club will be the Banc of California Stadium, the first open-air stadium built in Los Angeles since 1962 and boasts a 22,000-seat capacity.

IBM Global Technology Services (GTS) offers end-to-end IT consulting and business services supported by an unparalleled global delivery network that is transforming its business to lead in an era of Cognitive and Cloud. As a cloud services integrator, GTS is managing the services and underlying infrastructure in an integrated and unified way. It is modernising clients’ IT environments to help them meet the increasingly complex customer demands. GTS provides clients with innovative technology solutions that help them to improve their business processes and in turn, profitability.

Gensler is the architect behind the design Banc of California Stadium, the future home of the Los Angeles Football Club (LAFC), Major League Soccer’s latest expansion team.
The new 22,000-seat facility will be located in Exposition Park, anchoring the Figueroa corridor and capitalising on great views of the downtown skyline to become the home of “L.A.’s Team.”
An emphasis on an exciting game-day experience aims to capture a more personal relationship between players and fans by creating an intimate European-style character in a state-of-the-art facility. Significant ancillary programmatic elements offer entertainment, retail and dining opportunities to stadium-goers, as well as for visitors to the park, the nearby museums and the University of Southern California (USC) campus.

Legends is overseeing the project management for the new venue and PCL Construction Services, Inc. (PCL) is the general contractor building the state-of-the-art soccer stadium.

The new development will be anchored by the new 22,000-seat soccer-specific venue. The project, designed by LA-based architectural firm Gensler, will also include up to 100,000sqft of new restaurants, office space, a conference centre and a first-of-its kind world football (soccer) museum.

You can watch a video of the August 25, 2016, groundbreaking at: https://www.youtube.com/watch?v=X0CJTmQoI5M&feature=youtu.be